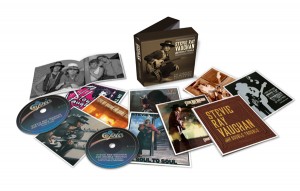 The complete collection of Epic recordings by Stevie Ray Vaughan & Double Trouble has just been released to mark what would have been the Blues legend’s 60th Birthday.

Vaughan tragically died in a plane crash in 1990 but left behind a legacy of music that would influence several generations after his passing.

Entitled Stevie Ray Vaughan and Double Trouble: The Complete Epic Recordings Collection, this includes the group’s original four studio albums, five live releases (including A Legend In The Making Live At The El Mocambo, a rare Canadian radio promo album) and a two-disc set of studio outtakes from throughout SRV’s remarkable career.

Stevie Ray Vaughan and Double Trouble have also recently been nominated for the 2015 Rock and Roll Hall of Fame. If you are of the right mind, and why wouldn’t you be, then you can cast your vote at Rockhall.com