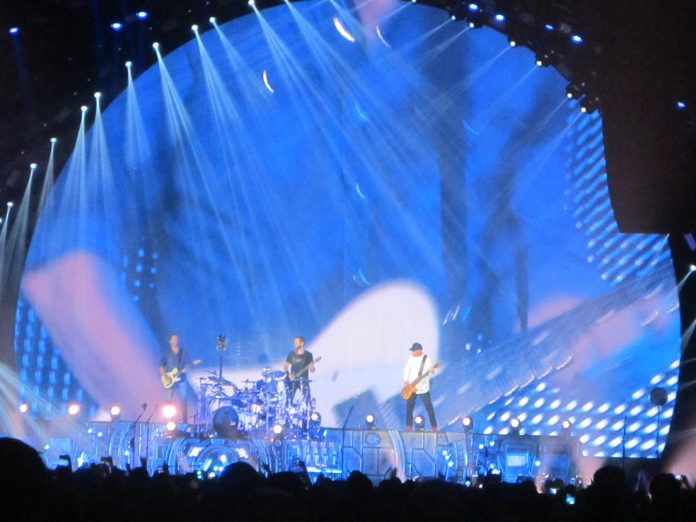 Are we having fun yet?

Five words, one massive hook, one mega hit and myriad meanings. The problem with fun, you see, is that everyone has a different idea of what the word means. And the way the more snooty rock press and critics carry on you’d think that Nickelback had done something rather more terrible than write a bunch of songs that people like.

I look around the arena when “Photograph” is being played tonight, and everywhere there are fans, young, old, men, women and all kinds of ethnicities singing every word. This is how you sell 50 million records. You can market it in whatever way you want, but when it comes down to it to sell that many records you have to connect. 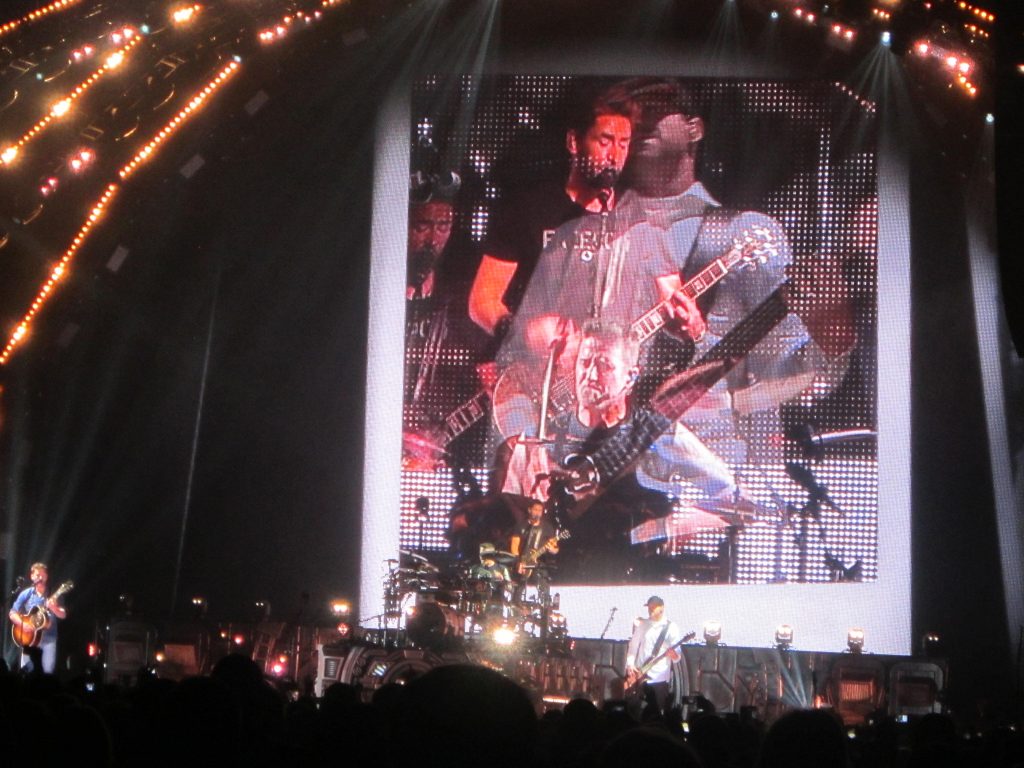 Then there’s that moment in every Nickelback gig. The bit where, when you see them for the first time, you go: “Christ, they’re heavier than I thought they’d be” (it happened to me when they opened for Jovi in 2006 and no doubt did to others here).

The set is initially mostly the same as the last time they were here: “Feed The Machine”. “Woke Up This Morning” and “Far Away” all join the aforementioned “Photograph”, while evidence that they do things in their own sweet way is clear when Kroeger sagely notes that: Adele doesn’t have songs with the hook line “you look better with something in your mouth”.

They make good on their promise to play something from all their periods with “Leader Of Men” before the kids who come up on stage to be a “Rockstar”look various stages of petrified throughout.

The point the frontman makes that: “its hard up here, man” isn’t – perhaps – directed at the youngsters themselves, but the naysayers online with no talent and plenty of bitterness. And at the risk of sounding like one, there are times when you wish they’d cut back on the between song stuff and just play. Too many times, for my money anyway, there’s too much chat and extraneous stuff. Bluntly, I came to watch superb songs, not the tour manager bringing out Jagerbombs.

And Nickelback have enough of those songs to actually disappear off the grid and rip up the setlist (although given that everything was ready with backdrops and so on it might not have been all that spontaneous). Nevertheless, “She Keeps Me Up” sees funky stuff strutted with aplomb, “Hero” is huge (but then all Nickelback songs sound huge….) and “Side Of A Bullet” – surely the heaviest thing they have and delivered with the most passion – all appear before “Animals” and the soaring“How You Remind Me”.

Trying to bring some truth into the false world of rock is hard, but they send up the notion of encores, before doing one – as if to exemplify the ludicrous nature of what they do. The two they choose, “Gotta Be Somebody” and the thumping “Burn It To The Ground” are slick, bombastic, but very well done – which equally is the show in microcosm.

Ultimately whether you like the length of the show or not or feel it might have been better maybe a touch shorter, or whether you like the talking or not – and there is a school of thought, as a mate who was there text me “at least they engages with the crowd” – there can be no denying that Nickelback are superb at nearly all of what they do.

And here’s the final thing to ponder: On pronouncing the name of Birmingham correctly, Chad Kroeger matter of factly says this “well, if I am gonna stand up in front of 10,000 people every night then the least I can do is say the name of the damn city right.

It’s called respect for the audience. Nickelback have it and – although there were aspects of this I could most certainly have done without – they absolutely deserve it in return. Do they care if they get it from the wider world? At this point, I really don’t think they do. They’re just having fun.