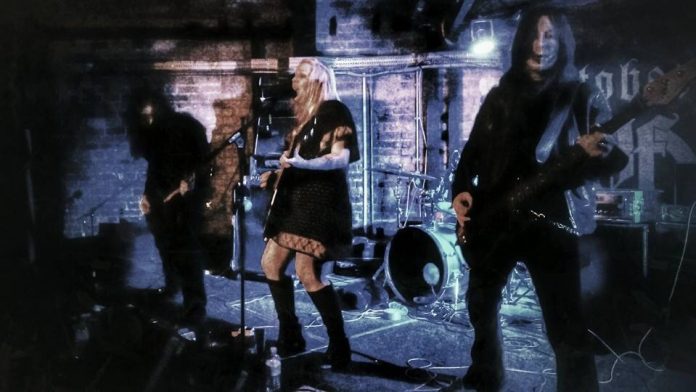 All day festival sees things get heavy in the second city

With the sub zero temperature outside permeating it’s way indoors, it seems a touch out of step that new (so new that this is their first gig!) local boys Conjurer are promising that things are going to heat up this year. However, they certainly have the low end rumble to make a statement. Coming from a sort of Dopethrone crossed with Trap Them kind of areas, this is dirty, thick and interesting stuff. The quartet make excellent use of both Dan Nightingale and Brady Deeprose’s harsh vocals, and when they cut loose the riffs are pure black fury. Like being bludgeoned and glassed at the same time as being kicked in the face, Conjurer certainly know the tricks and you might just be seeing more of them.

We like The Darkhorse before they even start. The reason for that is simple. The Northampton boys have a motto: there are two two types of people without beards. Women and children. How can you go wrong with that. Oh, the music. You want to know about the music? Ok. Well happily, that’s rather ace too. Think Goatwhore playing stoner rock and you aren’t too far wide of the bearded ballpark. Another band to make clever use of two vocalists. Their riffs are heavy, the sound intense. “The Human Kind” begins like a sledgehammer and builds from there. They more than live up to the facial hair. Just quite simply, simple brilliance.

This is Shebrew’s second gig of the week. The first was MVM’s showcase on Wednesday night. That should give an indication that we like this trio. A lot. With dashes of Fu Manchu and Kyuss this is fuzzed up rock n roll with a real classy touch. This is the same set they played on Wednesday and there is much to enjoy from the finest local bunch doing this type of thing.

Last time we saw Burden Of The Noose it was the final of the Metal To The Masses. There they came out and administered a lesson in brutality. Here nothing has changed. There’s six of them, two of them vocalists, who intend to leave you battered and bloodied. But, playing their first stadium gig (there’s a little terrace by the stage where people – including MVM – are sitting) the Wolverhampton bruisers are ready to enjoy themselves. With the guttural delivery bouncing off the screams, this is not music for the feint of heart, but if anger and aggression are your thing then the BOTN and their song “Kill The Bastards” are the thing for you.

They might have been late replacements on the bill after local heroes Grimpen Mire (who were meant to be playing their farewell show here) had to pull out and they might be skint, hungry and taunted by a Pringles machine in the bar but Pist are quite, quite superb. Any man who utters this phrase at a heavy metal gig: “We are from Bury, the home of the World famous market and Black Pudding. Do you like Black Pudding? You’d fucking better….” deserves the accolade being of our new favourite frontman, so step forward Dave Rowlands. This is dirty, grimy heavy metal, like Orange Goblin in a knife-fight with Down and the world is just about right. Having established that Black Pudding is our bag, the boys set about us with absolute abandon. The crowd initially doesn’t appear overly enthralled (“is it cos we aren’t from Birmingham, or is it cos we’re shit?” Asks drummer Andrew.) but no matter, as you might have guessed, we are converted and by their closing song, a track that sounds not unlike Motörhead kicking the crap out of their rehearsal room, so are the rest. Pist then: the sort of band that makes you want to get in a van with no MOT (and we’ll bet their van has bald tyres and a shit-load of porn….) and form a band. They are everything they want to be. Hell, they are everything we’d want our band to be.

So four months to the day after they played their album launch for “Awakening The Forest,” Alunah are back. Since then they’ve toured their songs across Europe, before making their return to their home crowd. Barely lit throughout to add to the ambience, they begin with “Bricket Wood Coven,” “..Forest’s” lead track and it’s immediately clear that this is very obviously a band that is comfortable both with the songs and together. Dark, smoke-filled, mystical. All things that you could associate with the group, and as lead man Dave Day picks out the opening riff of “Heavy Bough” they are all things that come to mind. Better still is “Scourge Of The Kiss” with its bass groove, playing over singer/guitarist Soph Day’s vocals. The song is an epic sprawling, beautiful thing, building to a fine conclusion. They celebrate the upcoming re-release of the 2007 debut album with “Hermetic Order Of The Golden Dawn,” which shows even then they had this sound nailed down. With that, we are right slap bang up to date with “Awakening The Forest” the new album’s superb title track. They finish with “White Hoarhound” which performed those duties on the previous release, and it sounds just as good as ever. Birmingham producing some of the best doom metal in Britain? Things are just the same as ever, then.

Even probably by their own admission Oxfordshire based October File are a little different to many – if not all – the bands tonight. They are from the Killing Joke/Prong school of very loud, very heavy angular metal. Singer Ben Hollyer has more pressing concerns, however. He’s spotted a fella in the crowd who’s beard he likes. Insisting that that said fan comes forward to let him stroke it, he announces: “when I start puberty I’ll get myself one of those.” October File are very much a band that relies on anger. “I Fucking Hate” tells you as much, and is delivered in exactly the style the track demands. It could be an act, but Hollyer does seem a little agitated at most things this evening, maybe he’s the type of person that needs to get riled up to get into his performance, but he seems irked – as actually he did when last we saw OF when they supported Prong. Maybe it’s the effect we have on him! The band has some good songs, and at the right gig there’s no doubt they’d be a formidable proposition. It’s just that perhaps that tonight isn’t their night, and you guess it’s not their favourite ever show. As they finish with “Isolation”, they have shown their talents well, despite most of the healthy crowd for the rest of the evening drifting away. Credit to them for putting so much into it.

An astonishingly diverse bill, and one that had much to get excited about. Let’s be honest, there’s not many better ways to spend a Sunday!