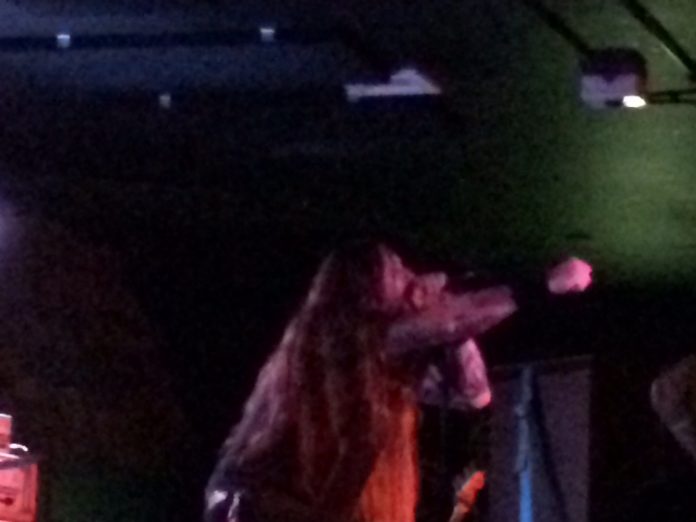 The tour starts here. In style.

Of all the comebacks of 2015, that of Gentlemen’s Pistols was one of the most exciting. Four years ago, opening for bands as diverse as The Sword and The Answer, Leeds’ finest four piece were something approaching incredible. Then they disappeared. Until that is a few months ago, when a new record was announced. That third album “Hustlers Row” is one of the best of the year, and this tour – starting tonight – is their chance to remind the wider public of their talents. As they begin their short, but oh so sweet, half hour with “Searchin'”, one of the standout cuts from the new record, it’s clear that time hasn’t dampened either their talents, nor frontman James Atkinson’s penchant for the onstage wearing of vests – although this one isn’t pink like they used to be. “Widowmaker” from their debut is as good as ever, new tune “Time Wasters” sees Atkinson and guitarist Bill Steer indulge their twin guitar Thin Lizzy fantasies, “I Wouldn’t Let You” possesses a groove that would shame AC/DC. “Sherman Tank” – their heaviest number – rolls over The Slade Rooms looking for trouble, and “Some Girls Just Don’t Know What’s Good For Them” is gloriously sleazy. A set rather amply provides assurances that this is most probably the finest rock n roll band in Britain right now, so yeah, welcome back.

After (what else?) AC/DC’s “It’s A Long Way To The Top If You Wanna Rock n Roll” welcomes them on to the stage, Orange Goblin’s very own man mountain Ben Ward speaks: “20 years, Wolverhampton, I’m getting old. We are Orange fucking Goblin, baby.” The reaction suggests the assembled throng knows.

The questions of how, when, and is it really 20 years? Can wait, just know that it really has been two decades since this band got together. On their journey from initially sc-fi influenced doomy psych stuff to the “Back To The Abyss” 2014 tour-de-force, they are now simply one of the finest metal bands on Planet Earth, their progression has been a natural one and there is something old school about their rise too. They’ve paid their dues more than most, and fully deserved the accolades that came their way, particularly in the last five years or so.

Faced with the Devil’s own job tonight of trying to fit a 20 year career and eight albums into 90 minutes, fans can moan that their own favourite isn’t played (and MV wanted “The Filthy And The Few”) but no one can doubt that this a brilliant live band and the collection of songs aired here is as good a career retrospective as you could wish to see.

It starts with “Solarisphere” from back in the last century, but this isn’t totally just a walk down memory lane. Even for a band with a back catalogue as good as Goblin, the “Eulogy For The Damned” album was special, and “Acid Trail” exemplifies that pretty early.

From there highlights are many and dips are pretty much non existent, still though, the breadth of this material shines through. From the Motörhead-ish “The Devil’s Whip”, dedicated here to Philthy Animal, to the almost punk “Your World Will Hate This” to the heavy stoner feel of “The Fog” and “Magic Carpet”, this is band to cherish giving a performance to savour.

Much of this is down to Ward himself, a frontman in the classic mould, he’s a huge man and if he tells you to bang your head in the slamming “They Come Back” you’d best do it just in case, but the wonderful thing about him – and indeed the rest of OG – is that they look like they know how lucky they are to have hundreds of people chanting their name for an encore, and moreover that if they weren’t on the stage they’d be in the crowd watching.

That encore comes after the dirty delta feel of “Time Travelling Blues” and even for this gig sees them slip up a gear. “Scorpionica” is a swirl of hair and greasy riffs, and “Quincy The Pigboy” marries it’s fabulously putrid lyrics, with a riff to kill for, before they choose to end with a relatively new one in the immense “Red Tide Rising”.

Apologising for people who might miss out on their favourite songs, Ward says: “there was nothing we can do, we could have done a three hour set, but no one wants that.” It was a statement, not a question, but there’s several hundred here who disagree.

Maybe they’ll do that for their fortieth.