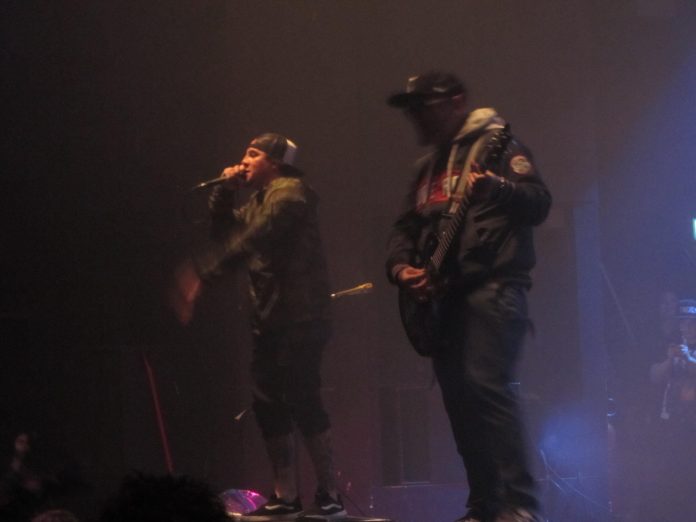 Support tonight is Californian alternative rock / metal nu wavers Alien Ant Farm, who, being honest are as popular as tonight`s headliners. What follows is an hour`s worth of at times intense but enjoyable entertainment. The boys share songs such as top five hit `Movies`, `These Days` a song that they played when they crashed the Black Entertainment awards and `Wish` which was included in Tony Hawk`s Pro Skater video. The band prove their ability to encompass other genres of music with the reggae flavoured `Never Meant` before singer Dryden Mitchell offers up ` Attitude` a song that is his moms and the late Chester Bennington`s favourite track and dedicates it to his mom. The show continues with `Courage`, `Lord Knows`, a cover of hardcore punksters Bad Brains’ `Gene Machine/ Don’t Bother Me` and `Sticks and Stones` before closing the set with their obligatory version of Michael Jackson`s `Smooth Criminal`, which was a was bold move, given the recent Channel 4 controversy. The fellas depart the stage having done their job and really hyped up this packed and appreciative crowd.

Nu Metal Legends P.O.D. or Payable On Death are here on a two week tour of the UK to promote their tenth studio album “Circles” After the intro of Linkin Park`s `In the End` the guys blast into the thumping  ` Boom` before crashing into `Rock The Party (Off The Hook)` After introducing Johnny Beats as the tour`s stand in drummer, singer Sonny Sandoval states “We’re gonna’ play some new jams” and the band share the grinding `Panic Attack`, bass driven `Rockin` With The Best`, `Soundboy Killa` and the infectiously melodic ` Always Southern California` from their latest album. The later song could almost become an anthem for the band, with the faithful singing and waving along to this tune. Some older cuts are offered with `Satellite` dedicated to friends they have lost, `Southtown` and `Without Jah, Nothin` which is referred to as their punk rock song but is almost a speed metal anthem which has the audience forming a circle pit. The show really ramps up towards the end with songs like the anthemic `Youth Of The Nation`, my favourite and arguably the band’s most popular song, the positive `Alive` and another slice from the last album with `Listening For The Silence` a track with a rockier building melody and crashing chorus. The troupe leave us having given their all. I have to say it was a thoroughly enjoyable gig with the band and audience riding along together, singing and chanting the words, while waving, dancing and jumping up and down. What I admire about P.O.D. is that they don`t shy away from being a Christian band but at the same time don`t force their beliefs on their fans but get across their optimistic message in their music and lyrics.