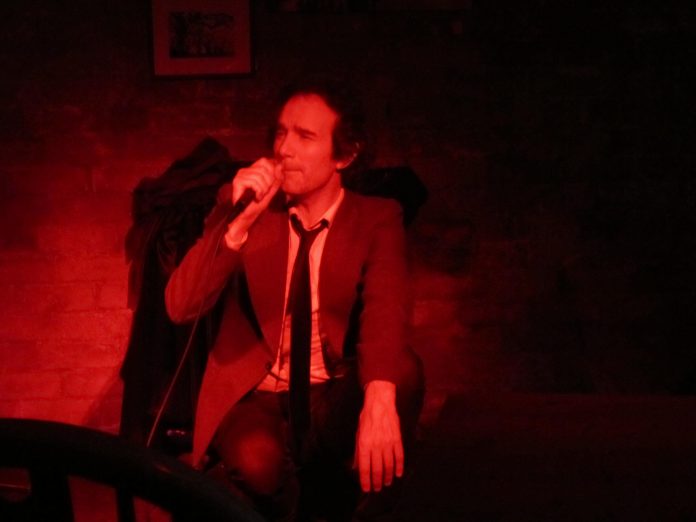 This evening`s event was billed as Patrick Duff “A rare show to celebrate the release of his new album `Leaving My Father`s House` and indeed it certainly was. I thought it was only a couple of years ago since I last saw him at a venue across the road but checking back, it was September 2014. So, I was glad I made the effort. On arrival Patrick was there and shook hands with people as they arrived, thanked them for coming and welcomed them to the show, a nice touch, I thought. Patrick was frontman for the alternative/indie rock band Strangelove, a wonderfully influential band who shined brightly from 1991 to 1998 and released three albums before disbanding, Patrick`s struggles at the time are well documented but he has come through them, talks openly about them and has produced some delightful music since he has overcome them. The show kicks off with `Evergreen` an intense but spellbinding and unnerving love song of sorts. My two favourite tracks `Julie Of The Rose` and the heartbreakingly beautiful `Hail Holy Queen` are shared and three songs in, I’m thinking this is my gig of the year and it`s only the start of February. I managed ninety shows last year so this is some going. After these two, a third song from the “Visions Of The Underworld” album is shared with `Henry James` before Patrick plays a few cuts from the album he is here to promote. The wonders of technology today allow the artist to stream the backing tracks to the songs as they appear on the album, through the pa, while he sings over them. `Maria` is first up, a track about a man who had everything but it just wasn`t enough. `Yesterday`s Man` follows and might possibly be a reflective song before `Saint Marie` an echo to a near romance, Maybe a first but next we have a song written about Marie Rose Ferron, a Canadian-American Roman Catholic mystic and stigmatist with `Little Rose` The last of the choices from the latest release comes with `For All I know` a tale of a relationship with many doubts and misgivings. Throughout tonight`s event Patrick shares some of his life experiences, such as his partaking in a Buddhist retreat and what he gained from it, his schooldays, Irish Roman Catholic upbringing, along with where his songs came from and what they are about. These were at times very intense and personal but what I love most about this performer. The show concludes with the haunting `A Woman Who Don`t Talk English`, ` Dead Man Singing` and a final piece from latest offering “Leaving My Father`s House” with an acoustic version of the aching `Land Of The Midnight Sun`

The encore is a unique arrangement of The Doors epic `The End` which is cut with a piece of prose and the show is over with the venue in complete silence, Tonight was a spellbinding, mesmerising and at times hypnotic occasion to partake in as an observer. Patrick`s lyrics are at times very Intense but powerful and thought provoking. He wears his heart on his sleeve and his shows seem almost cathartic. If on that sporadic instance he plays your city, I would encourage you to attend. Tonight, for me was a benchmark for the other shows I will attend this year. Thank you, Patrick.