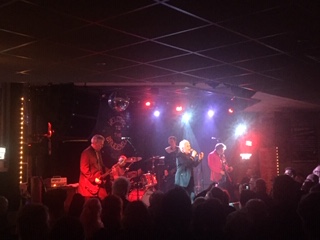 I have been to this venue once before but never in the main room. This place has a great atmosphere and caters for everyone not just those attending the gigs.

First up are Tic No Toc from Halifax who bang out no nonsense three chord punk tunes about everyday life from their singles and EPS that can be found on Spotify.  This was one of their first gigs and they played the songs well and got the crowd going. Thanking the guy who puts the gigs on for the opportunity to play such a great place was a nice touch and the set was over far too quickly for us and for them.

Although I have never seen them before, The Yalla Yallas from Leeds have been around for over a decade and recorded  a number of albums and played the Rebellion Festival last year. They are known as one of the hardest working bands in the Yorkshire Punk circuit and following their introduction by local poet it is clear they are no strangers to many of the early assembled punters.

The Yalla Yallas are a punk rock ‘n’ roll band, fronted by Rob Galloway, a versatile artist with many influences who has been around the punk scene for some time. The band is excellent and the bass player’s Trojan tshirt gave an indication of what is to come. The band is a great mix of a mega energetic front man, tight drums, melodic and driving bass and guitar work moving from rock and roll and folky riffs to solos any metal band would kill for.

This was a musical onslaught from start to finish moving between the punk rock and rollers, the folky and mournful numbers akin to The Men They Couldn’t Hang to Rob Galloway delivering a ballad in the middle of the crowd. He wants everyone to join in and ‘The Sound of the Kraken’ is a catchy punk pop song and a great example of the band inclusiveness. Stand out tracks for me were ‘Problems’, ‘Love Anger and the Credit Card Crunch’, ‘Somewhere Anywhere’ and a song dedicated to Rob’s crazy antics at Rebellion Festival or its predecessor.

The passion they have for their music and performing is infectious. They live and breath rock and roll and Rob cries ‘Rock and Roll’ throughout the show. The last song sees them go into a great rock and roll swagger and I especially rated the lead guitar to build up to the punk rock finale with our poetic host once again guesting this time on vocal duties. They obviously have a musical history but are an excellent band moving in the right direction and I look forward to hearing their new album.

I have seen Penetration a number of times over the last 40 or so years and this was a great venue to see them.  The crowd were into it from the off and they played early stuff from ‘Moving Targets’ and ‘Coming Up For Air’ and later tracks from’ Resolution’ released in 2015.

Penetration are a musical band with excellent players and bridge the gap between the Pistols and acts such as Patti Smith. The duelling guitars make the sound and the drumming as ever is both complex and precise with some excellent bass to hold it all in place. Their rendition of Patti Smith’s ‘Free Money’ is a great complement to one of their earliest influences.

Pauline made a point that Rob had done the set a number of times which is clearly not a regular thing and with this the bands plan of action was to give the fans a decent career spanning set and that’s exactly what they did. ‘Silent Community’, ‘Beat Goes On’, ‘She is the Slave’ and ‘Movement’ with its wonderful rhythm were all gems and the excellent ‘Shout Above the Noise’ is introduced as one of Chris Packham’s favourite songs.

As would be expected, there was mass audience participation on singles ‘Don’t Dictate’, ‘Danger Signs’ and the wonderful ‘Come Into the Open’ , with Pauline’s signature fragile vocal which for so long distinguished their sound.

They were well received all the way through and left the stage one by one to gain a deserved applause for each of the 5 band members. ‘Future Daze’ opened the encore and ‘Life’s a Gamble’ was a fitting end to a great night at an excellent venue.

Shame they didn’t play ‘Stone Heroes’ which for me has one of the best guitar solos of early punk bands, especially the live version. Hopefully they play it when I see them at Rebellion in August. Top band.