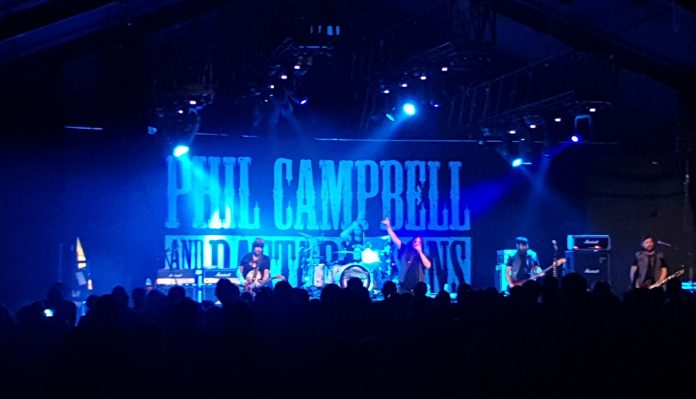 “Who’s never seen us before?” Asks Dave Kellaway, and the question alone answers why King Creature have come from the South West to do this. Such is the conviction with which they attack the set, you can only conclude that they are going all out to seize the opportunity. Big, thick, aggressive riffing characterise not just new song “Desolation” but the rest of the set too. KC seem very much to be looking forward, given that they play a completely new song in “Falling Down’ ” straight after the fresh single. “Power” ends things, but King Creature, you sense, are merely just getting started in earnest, and they could be a mighty proposition in full flight. 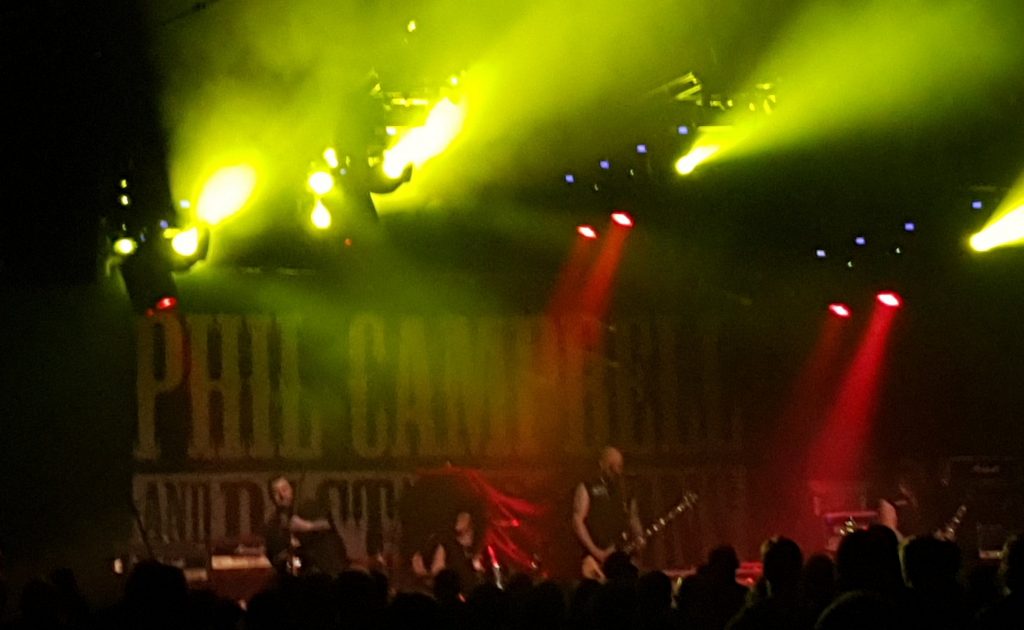 The first four songs of this Phil Campbell and the Bustard Sons set are, it seems to me, the show in a nutshell.

They start with two of their own, “Step Into The Fire” and the even better “Freak Show” – both from their wonderful “Age Of Absurdity” record, getting on for a couple of years old.

Then they do “Rock Out”, absolutely one of the best Motorhead latter day songs, which is followed up by the pick of Phil Campbell’s recent solo record. “These Old Boots”. A genuinely stunning track from a genuinely brilliant album. On the studio version, it is attacked – note, not sung – by Dee Snider, here it falls to Neil Starr to do it. Now, anyone who has seen PCATBS in the last 18 months or so, will know that Starr isn’t phased by much, and that is the case here. He and the band just roar it for all they are worth.

It carries on in this vein too. There’s enough stuff like “High Rule” to avoid it being nostalgic and enough “Born to Raise Hell” and the like to keep everyone onside.

It does need saying, though at PCATBS are one of the finest hard rock bands in Britain in their own right. Goodness me, listen to “Get On Your Knees” – the crowd singalong is most definitely not won by the side we are on, trust me – and that really is all the proof you need, and “High Rule” with its slight change of pace, adds to the nuance.

But there is also an element of everyone having fun. Which is why “Rockaway Beach” becomes “R.A.M.O.N.E.S” and nothing is out of place, why they can do a knockabout “Silver Machine”, why they can dedicate “Ace Of Spades” to “every motherfucker who was in Motorhead, including me…..” and still have time left to prove that Phil’s new one “Straight Up” rules.

Credit to them for both not ending the main set with a cover – instead “Ringleader” gets the honours – and for going back to their first song “Big Mouth” in the encore. The encore does end with “Killed By Death” and why not? It’s phenomenal and always will be.

I wondered to myself later, if this may evolve down Black Star Riders lines, and as the band grows – and it really does feel like a band – if there’ll be less and less Motorhead? That is for the future.

The last word goes to Phil Campbell himself. Introducing his sons and Starr one by one at the end, he finally grins and says: “and I am Mr. Campbell to you….”

“Sir” might be more apt, because this is one of the most special, unpretentious and honest rock n roll shows around right now.