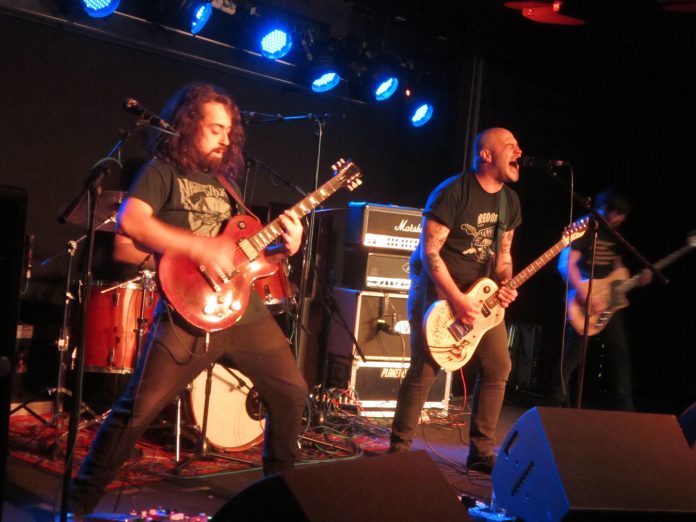 Like one of those heavyweight boxing contests from Las Vegas, in the blue corner tonight we have – weighing in at plenty of pounds – Washington’s Lionize, frequent visitors to these shores and packing plenty of punch. In the red corner, from Athens Greece, Planet Of Zeus, who take no prisoners, and when they were here last year with Grand Magus proved that they could land some telling jabs of their own.

Which is a roundabout way of saying that tonight’s gig is a double headline affair. No frills, no support, just two superb bands ready to go.

First out for the action are Lionize with a set that isn’t too dissimilar to their shows last year, barring one key point: this time “Nuclear Soul”, the album that makes up the bulk of it, is out, meaning that although it was clear it was superb last summer, now everyone in the enthusiastic crowd knows the words too. So “Face Of Mars” has a bassline from Hank Upton that rumbles with menace, “Power Grid Blues” adds some real rock n roll flourishes and “Darkest Timeline” is taken to another level by the keyboards of Chris Brooks, it’s just that this time the crowd can sing along instead of merely be enthralled. One of the most innovative bands around, for every out and out rocker, Lionize have also got a “Trustafarian” which they can calmly and cheerfully turn into a big ol jam and a bluesy ballad like “Ain’t It A Shame”. Although – rightly – focussing on new material, their wonderful “Jetpack Soundtrack” is remembered for “Breather” and “Replaced By Machines” – such a title has always struck me as incredibly ironic given that Lionize are one of the most organic and fluid live bands you can find and there is nothing mechanical about them whatsoever. To that end, frontman, the onesie wearing Nate Bergman (tonight’s is a superbly colourful affair too) ditches his guitar for both “Election Year” (“you can feel it in the air” he sings with real conviction) and a maelstrom-like “March Of The Clones. He does have his six string back for the last one, though and the Lizzy-like guitar sound of “Fire In Athena” proves to be as much a highlight here as it is on the record. As hard working as they are talented, Lionize released a career best record last year and this is reflected here with a confidence like never before. 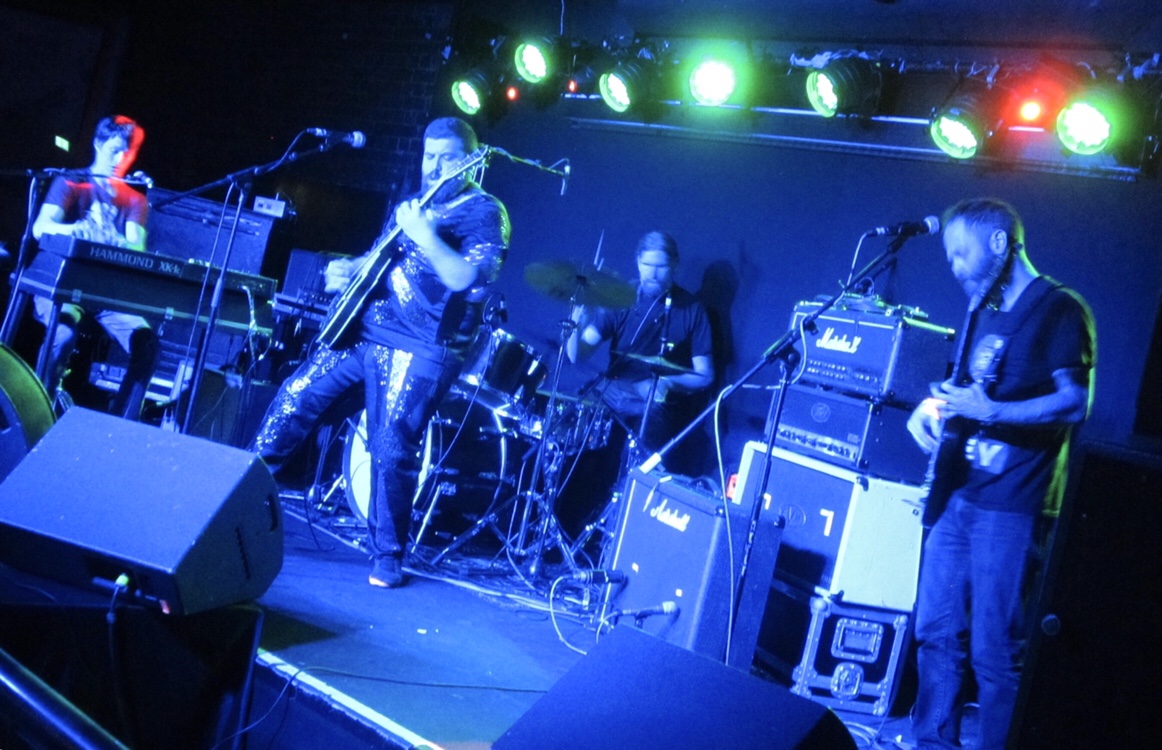 “Our brothers from a Greek Mother” was how Bergman refers to Planet Of Zeus earlier in the evening, and whilst there can be no doubt about their friendship and certain sonic similarities, lets have no doubt that the Athens based four piece are an altogether more muscular proposition than the band they follow. Riffs are thick, and crushing and they rely on groove to do their work. Babis Papanikolaou doesn’t so much sing his vocals, as roar with intent meaning the likes of “Loyal To The Pack” – the title track of their album from two years back – takes on the proportions of the last gang in town. Another of that albums choice cuts “Little Deceiver” sounds particularly sleazy, while “Them Nights” wants to have a party and it wants one now. Strip away the bluster and POZ are a hard rock band at heart, “Your Love Makes Me Want To Hurt Myself” is superb, but they are a mighty mob when they want to be, as “The Beast Within” shows as it prowls like something vicious. Serapheim Giannakopoulos, gets to beat his drums within an inch of their lives on the solo which ushers in “Vanity Suit”, and whilst that closes the main set, the rock n roll shuffle – albeit turned up to 11 – of “Vigilante” provides a fitting and fun encore, as well as giving Stelios Provis the chance to show his skill as a guitar player.

So, if this was a boxing match, who would have delivered the knockout blow? The unbeaten records, in this case, surely remain intact. The judges call it a draw. Both can leave with the winner’s belts held high.