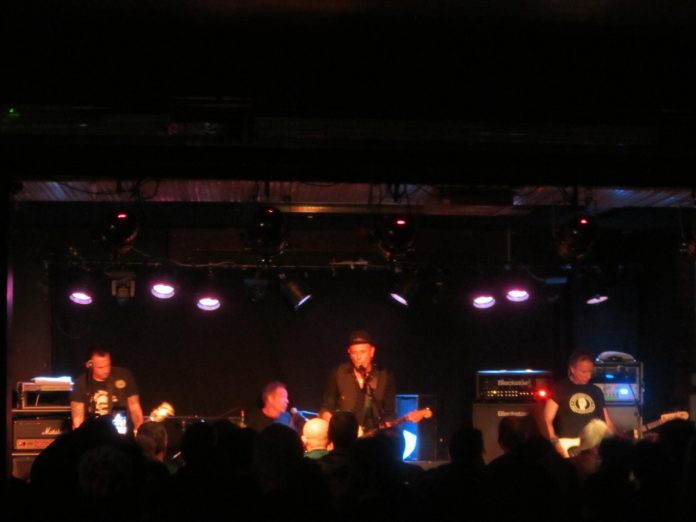 Hailing from the North East, The Main Grains are a punk / garage rock band formed in 2015 comprising ex Wildheart`s bassist Danny McCormack on Bass/Vocals, John JJ Watt on Rhythm Guitar/Vocals, Ben Marsden on Lead Guitar/Vocals and Ginna Rhodes on Drums/Vocals. What a cracker of a set this was. Danny seems like your best mate and had the crowd on board straightaway with the delightfully catchy “The Rain Is Over Now” and some great tracks that tipped a hat to the Ramones with “She`s A Catch”, “I`d Rather Be In California” the road song that Joey didn`t write and “Sock It To Me, Baby.” We get a cover of The Undertones “Teenage Kicks” before it`s back to a sleazy punk offering of “What We Gonna Do Now?” Such is the infectious nature of these guys that Danny manages to persuade a member of the audience to buy him a Jack Daniels. “You Got Nothing”, and the Yo Yo’s – the magnificent band McCormack was in after The Wildhearts –  “Keepin` On Keepin` On” are shared before the boys leave us with “Anthem”, the song on which McCormack took lead vocals. He’s still here, and, like the song says, he’s still in love with the rock n roll world.

I really enjoyed this set, these guys brought a little bit of sunshine to a dull October evening in The Black Country. If you love straight forward no-nonsense rock n roll, you`ll love these guys.

Formed by Paul Cook and Steve Jones, The Professionals arrived on the scene in 1979 following the demise of the Sex Pistols, but split just 3 years later. Fast-forward to 2017 and the new band spearheaded by Paul Cook, Paul Myers and Tom Spencer (who was in the Yo-Yo’s) himself released the first material under the Professionals name in 35 years and here we are tonight as a precursor to the official album launch at the 100 club, the following day. The lights dim, and the theme tune to the late seventies Crime action television drama series that has the same name rings out as the fellas hit the stage. It`s straight into a couple of oldies with “Payola” and “Northern Slide” before we get a track from their wonderful new release `What In The World` with the superbly anthemic “Good Man Down”

We quickly get a mix of old and new with the belligerent “Join The Professionals”, “Rewind” a song about memory loss with the catchy lyrics of `Wont you come back to me, sweet memory, come back to me, rewind` and the idealistic “Just Another Dream”

We get a few off the cracking new release with “Let Go” a real battle cry of a song, the anthemic “Take Me Now” and the sleazy garage rock “Going Going Gone” with it`s sort of punk meets Thin Lizzy riffs. A track that`s a tribute by the band to the late Lemmy Kilmister and David Bowie.

The set closes out with “Kick Down The Doors” the Pistols “Silly Thing” and what I think was “Too Far To Fall.” It`s not long before the guys are cheered back and as it`s forty years since the release of The Sex Pistols `Never Mind The Boll**ks` the boys play “Bodies” and “Pretty Vacant£ before taking their leave.

A pretty good show with a powerhouse performance from the guys.

Well you could say, a wonderfully energetic masterclass of rock`n`roll with real attitude, defiance and swagger from some seasoned professionals (forgive the pun).