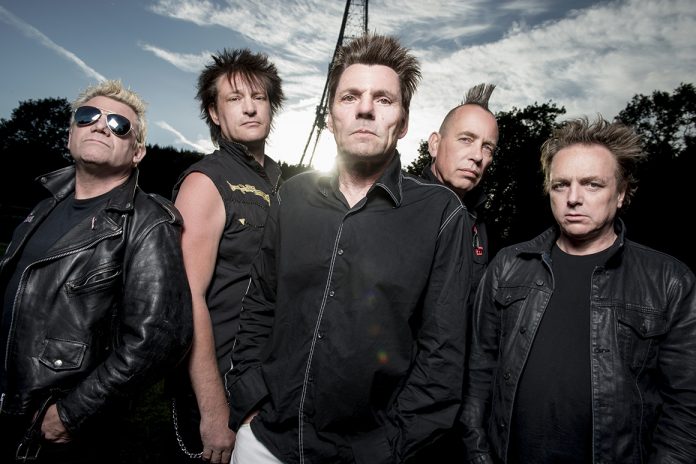 Steve – What inspired you to become a musician?

James: Two things – my best mate at school getting an electric guitar and insisting I did too so we could form a band. The other was Mick Ronson

Mat: I sang in St Margaret’s church choir in Leeds from the age of 7 to 13 so I did lots of vocal training, I remember there was a big pipe organ that had a fat awesome sound.  My Dad was a cellist so I was encouraged to play the cello and got my grade 4 at the Royal School of Music.  For my 14th birthday I got a bass guitar on the condition I kept up my cello lessons.

Steve –  If you hadn`t gone into making music, what do you think you would have done with your life?

James: I wanted to be an archaeologist from a very young age.

Mat: That’s a tough one, some of my old school mates have become builders, plumbers and started their own businesses etc.  I do a lot of video editing now which I enjoy so maybe something like that.  I’ve worked with underprivileged kids and would like to work with mentally & physically disabled people, I think that would be rewarding.

James: Yes, I would have loved to have played on a David Bowie album

Mat: I’ve worked with many artists on the Sex Drugs & HIV album, lots of great musicians and singers so I’m already lucky in that department but I would of liked to work with Tom Petty, I love his work, such a great writer.  Another hero of mine is Phil Lynott, again such a great writer and performer, he was so cool !  it doesn’t get much better than that for me.

Steve – What is the best venue that you`ve played at and what venue would you love to play at?

James: Well I grew up in West London and have never played Hammersmith Odeon, or whatever it’s called now, so that would definitely be on my list. I saw tons of bands there when I was a kid. I used to love playing the old Marquee in Wardour Street and supporting.

Mat: I have quite a few fave venues that i’ve played all for different reasons.  I was lucky enough to play CBGB in New York with Splodge and Sham 69 before it was redeveloped, such a shame all that history is gone now like the old Marquee in Wardor Street.  I played a gig in Chislehurst Caves in Kent which was awesome, the acoustics were mental and knowing Jimi Hendrix, The Who, Rolling Stones, David Bowie, Pink Floyd, Led Zeppelin had all played there made me feel very humble.  I played a show on an island in Budapest in front of 100,000 people for the ‘Love Music Hate Racism’ all star band with Jimmy Pursey and Drew McConnell from Babyshambles which was a buzz.  One venue I haven’t played and would like to play one day is Hammersmith Odeon or the Apollo as it’s known now.

Steve – What are the best and worst gigs you have ever played and why?

James: Supporting Bowie at Milton Keynes Bowl with Gene Loves Jezebel was pretty special. One of the worst was Birmingham Barbarellas in 1977. Remember those tomato shaped ketchup dispensers they had in Wimpy hamburger places? Someone smuggled one into the venue and squished it unleashing tons of red ketchup over me and my guitar. Another bad one was a place called The Mason Jar in Phoenix Arizona with Gene Loves Jezebel in the late 1980s. Every time the singer touched me we completed some kind of circuit and both got terrible electric shocks.

Mat: The worst gig I have ever done (that I remember) was an all day festival at The Forum in Kentish Town with Sham 69.  I was playing earlier in the day with a band called B Bang Cider and after the show I polished off a bottle of vodka with drummer Vom Ritchie.  The promoter came into the dressing room just after we’d finished the bottle of vodders and asked if I was going to be OK for the Sham set later.  Unbeknown to me Sham had been drafted in at the last minute after the main act had pulled out.  I was so drunk my fingers weren’t doing what my brain was telling them to do so I played like a complete c**t.  I’ve done a few gigs with Splodge when I’ve woken up in the van asking when we were going on and was told we’d already played.  God knows what those gigs were like haha.

Steve – What is your all time favourite album?

James: That’s a tough one – can I have more than one? I think the first two Roxy Music albums are incredible and have stood the test of time well. What’s Going On by Marvin Gaye would be up there too.

Mat: That’s a hard one, I like so much music it’s difficult to pick one.  I like albums where all the songs on it are good, I hate having to get up a skip stuff.  Here’s a few – Minx & Mush (Leatherface), Ghost In The Machine (The Police), Nobody’s Heroes (Stiff Little Fingers), The Crack (The Ruts).

Steve – What was the first record you bought and where did you buy it ?

Mat: The first record I got was Regatta De Blanc album by The Police in 1979, I got it from the record counter in Morrisons supermarket which was just over the road from where I lived at the time.  I think the first single I bought was Reward by Teardrop Explodes, again from Morries.

Steve – Is there an artist or band whom you`d like to collaborate with?

James: To be honest I love playing with all the bands I’m in. Playing with Tony Visconti and Woody Woodmansey in Holy Holy is an amazing privilege and Tony has used me on a few sessions. I’ve loved working with him.

Mat: I like working with other people, collaborating with interesting bands & artists, bouncing ideas around and creating music.  I’ve done quite a few sessions for various people and produced quite a lot of stuff which is a whole different art.   I’d love to work with Stewart Copeland, drummer with The Police.  I always rated his drumming and some of his later stuff was interesting when he went around the world sampling different sounds and making songs from looping samples etc.  Copeland has done lots of film music, he’s always had a punk ethos and also filmed the infamous ‘So What Tour’  featuring Anti Nowhere League, Chelsea, Chron Gen & The Defects.

Steve – Is there an artist, band or an album that has really impressed you recently that you think we should check out?

James: To be honest no, not really, although I like Liam Gallagher’s new album – kind of a guilty pleasure.

Mat: I’ve been working with Louise Distras recently, she is so focused and driven by what she does it’s great to see.  It was nice to be asked to play on her last few singles and new album, I really like Louise’s stuff so check her out if you haven’t already.  I played some live shows with Louise a few weeks ago and supporting us was a 3 piece band called The Kenneths who were awesome.

Steve – Is there anything you want to add or share?

James: Everything is getting closer to being over – so live every day like you mean it.

Mat: Keep buying the music and coming to gigs, support your local bands & venues, we need you !!!