Maximum Volume caught up with Daniel Droste from one of our favourite doom bands AHAB to find out about the stunning new album, inspiration and touring. 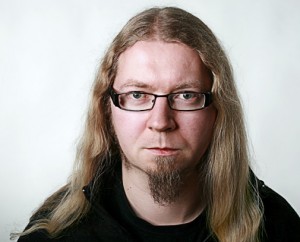 Your new album “The Boats of the Glen Carrig” is based on the 1907 William Hope Hodgson novel of the same name.  First of all how did you come across the book? And what was it about this book that you felt it was the right story to use it as the basis for the new album?

A fan on Facebook gave us the hint to take a closer look at Hodgson’s “The Boats of the Glen Carrig“.  We neither heard about Hodgson nor about this story before, so we were very excited reading it and soon recognized that it could be a fitting candidate. The story itself with its horror and mystery elements made it to an interesting template to compose heavy music to.

Before you read “The Boats…” did you have any other possibilities in mind for your next album? Did any other short stories or novels peak your interest enough to consider them as album potential?

We’ve read several books before, but none of them seems to be the right one at the moment. Hemingway’s “The old man and the sea“ was on our list for example, which is a nice story for sure, but the prevailing mood it delivers just didn’t fit to the kind of AHAB sound we had in mind. Jules Verne’s “20000 Leagues Beneath the Sea“ was also on our list, a story I loved as a teenager….we soon recognized that this actually IS more like a youth book, with no working surface to compose dark and heavy music . Hodgson’s book really was the only literature we discovered this time which was worth working with.

Did you approach the recording of this album is a radically different way to 2012’s “The Giant”?

We recorded at RAMA Studios in Mannheim, the same studio we recorded “The Giant“ back then. We were very satisfied with the sessions we did with sound engineer Jens Siefert 3 years ago, so we knew that we’ll book this studio again. It was a big advantage for us to know the studio from former recordings.

We knew the engineer’s way of working, what’s possible and what we wanted to have different in our sound. We booked more days this time and spend a lot of time in finding the perfect guitar sound by checking lots of different guitar heads. I also had much more time for the vocal sessions, and was present at every mixing session. Recording this album was really a hard piece of work, especially because mixing happened during the week. So I had to work in my job till five, drove one hour to the studio , mixed the record till late at night…but we’re very satisfied with the result, so the lack of sleep was absolutely worth it in the end.

The album has only five main tracks, leaving out the bonus track. Did you have plenty of different ideas and tracks that eventually got whittled down to the album tracks or did some tracks mere into one another to make one longer track?

We never plan do compose songs that have to be long, it just happens , and a song is finished as soon as it feels right. We composed two or three songs before we decided to use Hodgson’s book, but soon recognized that we moved into a “wrong direction”, so we threw them into the gutter and started anew.
The songs usually develop by different ideas of riffs or guitar melodies. On former records I often composed the whole song on guitar at home, took it to the rehearsal room and the guys just joined in. Nowadays it’s more like taking single riffs to the rehearsals and developing the song together.

In my view one of the album’s great strengths is that transition that you have between a vast ocean-like soundscape that suddenly ends up becoming claustrophobic and almost suffocating.  How was that achieved, because it’s a very impressive feat especially when done multiple times in the space of one track?

One of my main aims with AHAB is to compose music with musical contrasts. The sea itself, as a beautiful source of live and powerful destroying force of nature, is full of contrasts too, so working with musical opposites is just logical, isn’t it? Besides the thematic aspect, contrasts are an excellent tool to amplify different moods. A brutal heavy riff sounds even more heavy when it’s placed after a beautiful clean part and vice versa. We’re always focussing on composing each song as a little journey,  and those ups and downs became one of our trademarks over the years I’d say.

Olav Iversen (SAHG) did a guest appearance on the album. How did that come about?

After the whole record was composed, the label wanted us to record an additional song for a 7 inch single. There is only 5 min time on one side of a 7 inch which is too short for our songs, and the story of Hodgson’s book was already composed, so we decided to do a cover song. We sometimes discussed inviting a guest vocalist again, but we didn’t come to an agreement.
After our gig at Summer-Breeze Open Air last year, we went to see SAHG which was the last band playing on the festival billing. I was a fan of SAHG’s music before, but never had the chance to see them live. They played a great gig , especially Olav’s vocal performance was really impressive. We already had a few beers and suddenly Chris asked me :“ Hey, what about asking this guy for guest vocals?“  ….and I was absolutely sure that this is a great idea. So we went straight up to Olav on the stage after SAHG finished their set and surprised him with something like:“ Hey, we’re a doom band from Germany, wanna do guest vocals on our forthcoming album?“
We exchanged e-mail contacts, and luckily he decided to participate on “the turn of a friendly card“.

The band appears to have the “nautical doom” genre down to perfection so where do you see the band over the course of the next decade or so, if you can/want look that far ahead?  There is a wealth of novels, tales and stories from which to seek inspiration from if you wished to expand within your current sound.  Alternatively you could also deliberately make a move away from those themes and open up another genre for yourself.

AHAB was founded to compose sea related literature, which is our lyrical trademark and main inspiration for our music, and we won’t leave that path for sure. There’s still so much stuff to work with, that it won’t be hard to inspire ourselves for some more releases.

What is it about the sea, and all of its dangers and wonders that fascinates you so much?

There are many aspects that are very attractive for us as musicians to write music about the sea.  It is a vast universe, with unexplored depths, a habitat of mysterious creatures so it is a source for imagination and a good template for fantasy and horror elements. The sea has a beautiful side such as a rough and deadly counterpart. These are the main elements we try to compose with our music.

Now the album has been released you’re embarking on a European tour, how much of the new material is going to be in the set list?

We always try to include songs from every album in a live set, cause that’s just what I’d expect  from my favourite band live. Most of our songs are at least 10 min long, so we won’t be able to play more than six, maybe seven songs on a set of 80 minutes length. As we are promoting our new record, we focussed on new songs on the set list of course, and decided to play three new tracks on this tour.

Is playing live the biggest satisfaction for you as a band or is the creative process what drives you?

I’d compare composing and playing live with theory and practice. It’s always a satisfaction if a creative process leads to a song, and finally to a new record. We’re no full-time musicians, and all we do for the band happens besides our jobs , that requires a lot of time management and energy. But that makes you even more proud if you finally hold a beautiful vinyl in your hands.
I also really enjoy playing live. We do this kind of music for ourselves in the first place, but luckily there are quite some people who seem to enjoy our stuff as much as we do. Releasing the songs energy on stage is kind of a different level , like a more rough and brutal version with direct contact to the fans.
As a musician you’re always interested in people’s reaction to what you’re doing, and a live show is the best transmitter for sure.

Given the general three-year cycle between your albums it looks like we can expect another in 2018. Have you and the band planned that far ahead?

We actually never planned to release our albums in a three year cycle, it just happens. After a new release we usually concentrate on playing live shows to promote the new material, but as soon as we found a good story to work with we’re actually quite fast with composing the record. The good thing about not being a full-time musician is that we can do whatever we want. We have no pressure from the record label and can take the time we need to write new songs. We’ll focus on our upcoming tour and the last live shows for 2015, and I’m not even interested in composing new stuff at the moment to be honest. I always prefer to get a distance to the last output we did, to experience the songs live on stage to have the possibility to realign for what’s coming next so…no plans for the next release at the moment.

Thanks so much for your time Daniel.  Anything you want to add?

Thank you very much for your interest! Live fast, play slow, die old!