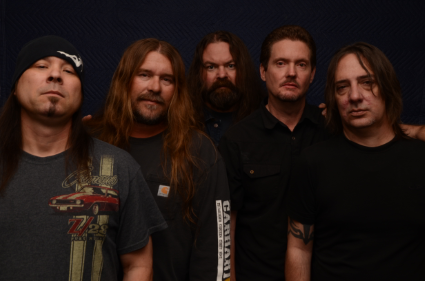 One time COC and current King Hitter man on the EP, live plans and not being able to live without music

Tell us a little about the formation of King Hitter.

The short answer is we’ve all known each other for years, played in various bands together, and the chemistry and timing were right for it to happen. Jon, Scott and  Mike got together first and instantly locked it and laid the ground work that day for one of the of songs that ended up on the record. We discussed bass players and being that Chuck and Jon had history and were already a great rhythm section it was a no brainer. Chuck showed up the next weekend with no equipment, picked up Jon’s studio bass, plugged into the PA and blew us away. A couple of weeks later we got in the room with Karl and jammed on some COC and Sabbath stuff. Within a couple of hours we had moved on to writing original material. By the end of the day we knew we were a band.

Why only a mini album? Are there plans for a full LP with King Hitter?

We went into the studio to demo one song and it went so well, that we tracked five.  We decided to not wait and test the waters as soon as possible.  The result is the EP.  The  response has been great so far.  We are very fortunate to have Paula Hogan at Restricted Release/Candlelight USA behind this release. As for a full length, we  have half of it already written.  We would like to be in the studio for it later this year with a early 2016 release.

You take your name from a particular song I believe? Why that song, is there a story behind it?

It’s a song by the Australian rocker, Stevie Wright called “Black-Eyed Bruiser’.  It was released in 1974, and has a very proto AC/DC vibe to it. I have always loved the lyrics and the term, ‘king hitter’.

“If you see me walking down the street, better get out of my way.  I’m a real king hitter, always have my say.”  It always appealed to me, that’s all.

It’s a very muscular sounding record. Why this sound? Why now?

Well, besides modern production and mastering techniques, we just wanted it to be as heavy as possible, in a way that worked with the material.  Most of our favorite heavy albums have a kick-the-door-in vibe. We dig the visceral nature of massive low end.

I have to ask a couple of questions about your wider career: you obviously sung on “Blind,”The breakout album for COC. I saw them live last month and they still play songs from that record. You must be proud of that?

Yes, I am. Blind was not only an important album to me, but to the band.  It represents a pivotal moment in its history. This album brought COC to a wider audience. It still carries the hardcore punk rock intensity and merges it with metal musicality and heaviness.

You formed Leadfoot. The “We Drink For Free” record, I loved that album, is that band still a going concern? I’m asking as a fan and because I find it on the internet!

Thanks. I love that last Leadfoot album, too. Leadfoot will never die.  I reserve the right to bring Leadfoot back at any time.  We have three albums worth of unreleased material ready to record.  There are already demos for most of the songs.  Maybe we will just release the demos.

Now you are touring with Blind. But, as I understand it, you are playing a couple of King Hitter shows on that run. On the KH Facebook page it says you are looking forward to a busy year, does that mean more King Hitter gigs?

Yes, we are out with COC Blind and things are going great.  KH played in Joliet and Milwaukee.  They were great shows.  The plan is to get out and play as much as possible this coming year after the COC Blind tour.  Obviously, an EP can only get you so far.  Once the full length comes out, greater touring will be possible.

Any plans to bring the band – or any of your bands for that matter – to the UK?

Absolutely.  We will go overseas as soon as the opportunity presents itself, whether it is with COC Blind, KingHittter or even Leadfoot!

I’m always interested to know: do you still retain the ability to be a fan despite being in a band?

Of course, I remain a fan. I can’t live without music. There are so many great bands. The last record I got, was one that was given to me during the photo shoot for Teenage Timekiller Greatest Hits, Volume I, which comes out this summer. Clifford from B’last gave me Nick Oliveri’s Uncontrollable, Leave Me Alone album.  It’s pretty badass.  We are all on the album together.  Check  into this release.  It’s a who’s who of punk and metal.  Awesome.

Finally, you have appeared in a number of bands, but if you had the chance to sing for one, which would you choose?

That’s a tough question to answer.  Usually, the band that I’m currently in, is the one that I would want to sing in.  Leadfoot, at its peak, holds a special place in my heart.  I love all the bands though…Seizure, School of Violence, COC, Leadfoot and Kinghitter.