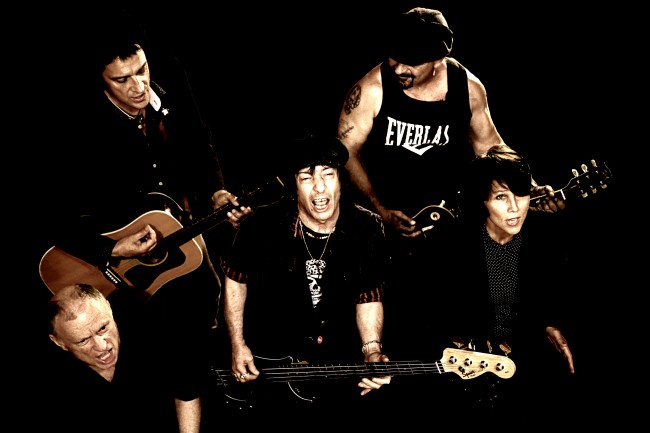 Diamond Dogs singer, solo artist and now the singer in power pop supergroup The Crunch. The legend that is Sulo answers our questions

This is your second album, so why Brand New Band?

Well, the first album was recorded in sessions and everyone was tryng things to see what Crunch was all about, now we knew! One week of concentrated recording on the countryside in Sweden and we’ve got a “brand new brand”!!

Tell us a little of how you guys got together please?

We met on a book launch in Stockholm and played a couple of Clash, [Cockney] Rejects, Sham [69] songs during the release of the book “Keep Yourself Alive” (about British 70’s and 80’s rock stars) and after the show Dave (Treganna) suggested that we should form a band!

Obviously this time you’ve added Idde Schultz to the band as a full member, has that dramatically altered things?

The writing process: all you guys are busy I am sure, how difficult is it to get a The Crunch record made?

To be honest I’m writing all the time and it was an easy and pleasant process to write the new Crunch stuff. In Crunch I write all the material and deliver them as acoustic rough demos and then every member  put their special touch on it.

Is it a similar story with live shows? I know you’ve done a few but is there any chance of a full tour?

We’re looking at a European tour in Sept/Oct including Spain, Scandinavia and UK

The songs on the record, one of them  “25 Hours A Day” feels like a love song to rock n roll, is that how you feel about music?

And the first track on the album – it’s a real Springsteen thing. Not the type of thing you would have done in Diamond Dogs, say. Is that why you have so many projects, to explore all those sides?

Yes I guess that’s a part of why I’m doing all these different things, I need the challenge!

I guess you are still a rock fan? That being the case, is there a new band that you would like our readers to check out?

The Crunch is almost a new band, he he no but I think you should check out The Slydigs, they’re a great band that supported Crunch at the Nambucca last year.Now they’re supporting another London act called The Who, ever heard about them…..?

Finally  what would you pick as the best song you’ve been involved in.

“Broken” from the upcoming Diamond Dogs album “Quitters and Complainers” that will be released aug 14. Check it out!