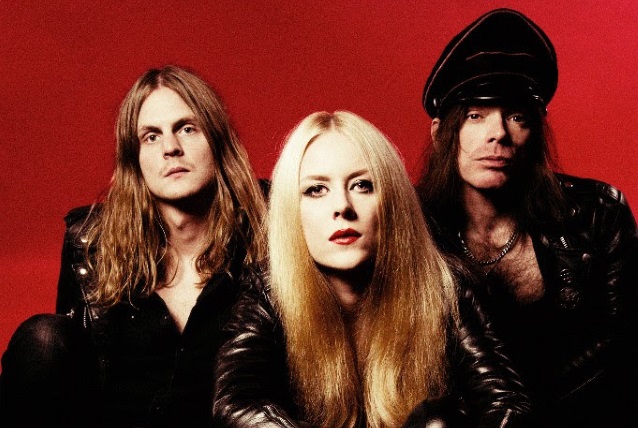 Lucifer, the collaboration between Johanna Sardonis and Nicke Andersson, have just released their new album.

We sat them down to ask all their musical firsts……

What was the first single you ever bought?

Johanna – Guns N Roses You Could Be Mine

Nicke – Kiss I Was Made For Loving You/Hard Times

And the first album?

Who were your favourite band as a kid?

What was the name of the first band you were in?

And do you remember the first song you wrote?

Where was the first gig you played?

Nicke – In a mall in the small suburb where I grew up.

What was the best gig you played?

Johanna – That’s difficult. There have been several highlights in the past. What I think is one to top it all, is that we will play three gigs on the Kiss Kruise this year!

Nicke – I have no idea but last weekend in Austria with Lucifer was pretty good.

Which of your songs are you most proud of?

Nicke – Giving Head To The Dead

Who are your favourite current band?

Johanna – Can I name two? Black Mountain and Golden Void

What was the last album you purchased or streamed?

Finally, if you could put a fantasy band together, who would be in it?

Johanna – Grace Slick on lead vocals, Nancy Wilson and Jimmy Page both on lead guitar, John McVie on bass guitar, Bill Ward on drums and vocals, all in their 70s selves!!!

Catch the band on your this autumn.