This Covid-19 pandemic ruined what was supposed to be the 35th anniversary of the band. The gig was due to be a celebration was off, of course, but they did they release a brilliant new double A-side single by way of consolation.

“Out on their own, beholden to no one” said our very own Andy when he wrote his review, but now something more in-depth, as Godfathers from The beginning, Damian sits down with the band’s main man, Peter Coyne, to get his thoughts on everything from what he’d have done if it wasn’t for music, his love for The Beatles, and what the future holds for music in general.

What inspired you to start a band?

Peter Coyne – I was obsessed with music as a kid…I was lucky to grow up in the ’60’s & ’70’s which were truly golden eras for pop & rock & roll in general. So I’d listened to & loved The Beatles, Stones, Kinks, Small Faces & soul music like Stax & Motown. Then came Glam rock – Bowie, Roxy Music, T Rex, Mott The Hoople & great singles artists like Sweet & Slade. Punk music was a life changer too & in particular The Sex Pistols, Ramones & Buzzcocks. American bands like The Doors, The Byrds, MC5, The Stooges & Velvet Underground also made a very big impression on me too.

If you hadn’t gone into making music, what do you think you would have done with your life?

Peter Coyne – I was a music journalist before I was ever in any bands. I started writing for Record Mirror when I was about 18 or 19 & also wrote for ZigZag magazine & a few others. These were big national publications & I was pretty good at it – so it’s possible I would have carried on being a journalist. Or maybe gone into robbing banks or drug smuggling – who knows!! I have definite criminal tendencies, but thanks to music I have never really acted upon them…

Is there an artist or band you would have liked to have played with living or deceased and why?

Peter Coyne – I would have liked to have been in The Beatles circa ’61 during their Hamburg period. All that black leather gear they wore, quiffs, speed, girls with peroxide blonde hair, seedy clubs, high energy rock & roll & exotic, neon night life would have suited me fine!! Beatlemania & their psychedelic era was ace too. Fab4 FOREVER! X

What is the best venue that you’ve played at and is there a venue you still aspire to play?

Peter Coyne – That’s impossible to answer as over the past 35 years & right up till today The Godfathers have been fortunate & talented enough to have played at some fantastic, legendary venues around the world. But if I can pick two venues that we haven’t played yet that I’d like to that would be London Palladium & Madison Square Gardens in New York.

What is your all time favourite album? Artist?

Peter Coyne – I can’t answer that question honestly either as I love so much music that my tastes change from day to day depending on my mood.

What was the first record you bought and where did you buy it?

Peter Coyne – The first single I ever bought was ‘Virginia Plain’ by Roxy Music in ’72 & I got it from a record shop in Herne Hill in south London. It’s a brilliant piece of music & still one of my all time favourites…their 2nd album ‘For Your Pleasure’ released in ’73 was the first LP I bought too & Roxy Music at Empire Pool Wembley in 1975 was also the first gig I saw. I learned later on that many of the people who started punk

In the UK were at that same concert…members of Generation X, Sex Pistols, The Banshees & others all there as punters. Roxy Music live at that period were beyond good, out of this world. Their first 5 albums were tremendous, really innovative…but I don’t really care for any of their later stuff, it’s too mellow & middle of the road for my taste. Early Roxy were like a lightning bolt from the future, a really fantastic band.

Is there an artist or band whom you`d like to collaborate with?

Peter Coyne – Not particularly, I am quite happy making great music with all the guys who are now in The Godfathers. The grass is not always greener on the other side…The people in The Godfathers now are great characters & tremendous musicians – so it’s a total pleasure to hang out with them & write or perform music. I don’t see any limit to what we all might achieve together if we put our minds to it & our heart & souls. Richie Simpson (guitar) & Billy Duncanson (drums) were in Heavy Drapes & have been described as the Scottish Asheton brothers! Jon Priestley (bass) was previously in The Damned (he also plays really great guitar & keyboards & produced & engineered our latest single & did a fantastic job) & Wayne Vermaak (guitar) used to be in a group called The Great St. Louis. Together we are rock & roll dynamite & make a mighty fine noise.

Is there an artist, band or an album that has really impressed you recently that you think we should check out?

Peter Coyne – I heard a single by Paranoid Visions on a radio show I was being interviewed on the other day called ‘The Spinning Wheel’ – that was pretty good.

Peter Coyne – has it been good for anybody? I don’t think so…this sort of horrible pandemic comes along every hundred years or so & it’s our misfortune to be ‘living’ through it now. I am lucky though to live in a beautiful seaside town called Prestwick on the west coast of Scotland, so I can walk to the beach in 5 minutes. That clears my mind of all negativity. I actually finish off some new songs I am working on during my walks there…but like any ‘musician’ I miss touring & playing concerts. We had lots of fabulous festivals, tours & live events lined up for this year to celebrate The Godfathers 35th anniversary since the band’s formation, but of course they have been postponed till next year due to this shitty Coronavirus! So we released a brand new double A side single ‘I’m Not Your Slave’ & ‘Wild And Free’ instead. It’s frustrating putting live plans on hold but I certainly can’t complain when people are literally dying of this terrible virus – count your blessings, that’s what I say. 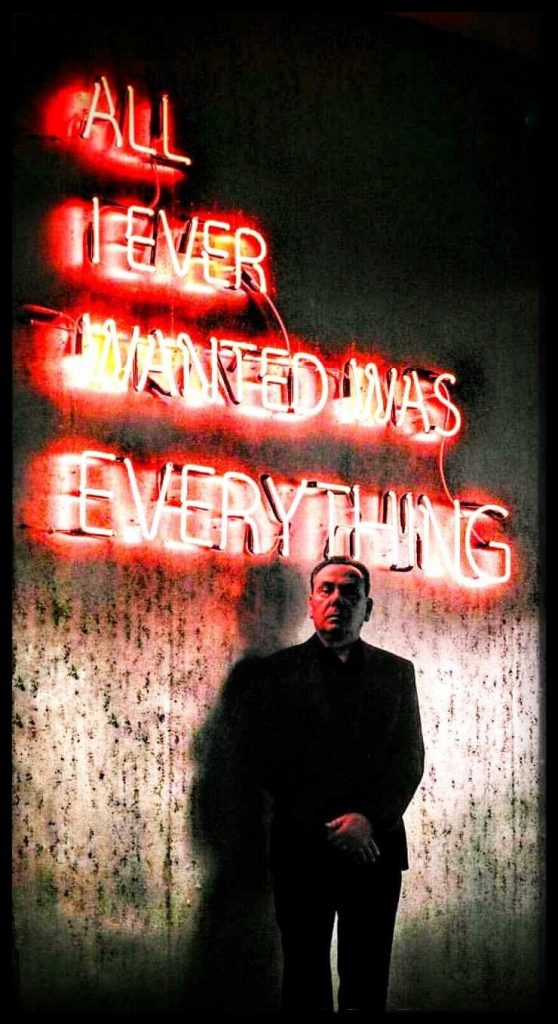 You have a new double A sided single out  “I`m Not Your Slave / Wild And Free” is there an album in the offing?

Peter Coyne – Definitely! Those two tracks are just a taste of things to come from us…we have had some fantastic reviews for that single in the UK & all round the world, so that was extremely pleasing. ‘I’m Not Your Slave’ is quirky, catchy ‘pop’ & the lyrics refer to a political situation rather than a sexual one. ‘Wild And Free’ is just downright dirty rock & roll. I really like the contrast between the two numbers & that’s why it works so well as a double A side. There was another real good number called ‘Dead In Los Angeles’ that we had been playing live fairly recently – but we didn’t consider releasing it because it wouldn’t have been appropriate when people are actually dying in LA because of this scummy Coronavirus. We wrote it last year so if course it had nothing to do with that – it’s about the last night on planet earth of a rock & roll star. It’s about 7 minutes long, quite an epic & a stunning piece of  music. So that will definitely be on The Godfathers’ next studio album set for release at some point in 2021. We have got some really good numbers on the go at the moment. We are all writing songs & coming up with tunes at home individually at present, bouncing ideas over the internet. When lockdown eases in both Scotland & England we will get together & whip up all these new ideas collectively – I can’t fucking wait!! We are all determined that The Godfathers’ next  studio album will be ultra-special.

What have the new members of the band brought to the table?

Peter Coyne – Top quality musical skills, experience, passion, determination, belief & a great sense of humour…exactly the kind of requirements you need to be in a serious rock & roll band. This time everyone brings something to the party – know what I mean?

You played your first gig on 17th June 1985 it must have been disappointing to not mark this 35 year anniversary landmark with a live show?

Peter Coyne – Of course, that’s only natural as The Godfathers have always been a band that loves to play & deliver live. But we will get back to playing gigs when it is absolutely safe for the audiences & they feel comfortable going to them. These are very scary times for everybody round the world & if concerts have to be put on hold until the time is absolutely right for them to happen then so be it.

How do you feel about returning to live shows after the Covid-19 outbreak?

Peter Coyne – I cannot fucking wait! We have some extremely tasty gigs to look forward to…big festivals in the UK & Europe & tours literally all round the world…bring it on! As dear old Keith Richards says about playing gigs – “let the tigers out of the cage.”

Peter Coyne – It’s definitely possible but again with this crazy situation anything could happen. I don’t really know, I am not Nostrodamus – just some geezer from south London in a band.

How many venues do you think will close and what can we fans do to help?

Peter Coyne – Again my crystal ball is not clear on that. Fans can help by supporting bands right now by buying their merchandise or their brand new double A sides! We have lost our livelihoods & get fuck all support from the so called ‘government’. When concerts do go ahead do not complain about ticket prices & if a venue is closed in your area get off your arse & travel to see a group. They do that all the time in Europe & America, but some people in England would not be happy unless you played in their back yard. If you do not support live music then don’t fucking complain when it’s not there…

How would you like to be remembered and what would you have engraved on your tombstone?

Peter Coyne – I would like The Godfathers to be remembered as a great British rock & roll band who made some fantastic singles & classic albums – right from the start to the very end. I would also like us to be remembered as a brilliant, kick ass live band who brought a lot of pleasure to punters all round the world. On my gravestone you can chisel “He came, he saw, he’s gone – awopbopalubopalopbamboom!”

Is there anything you want to add or share?