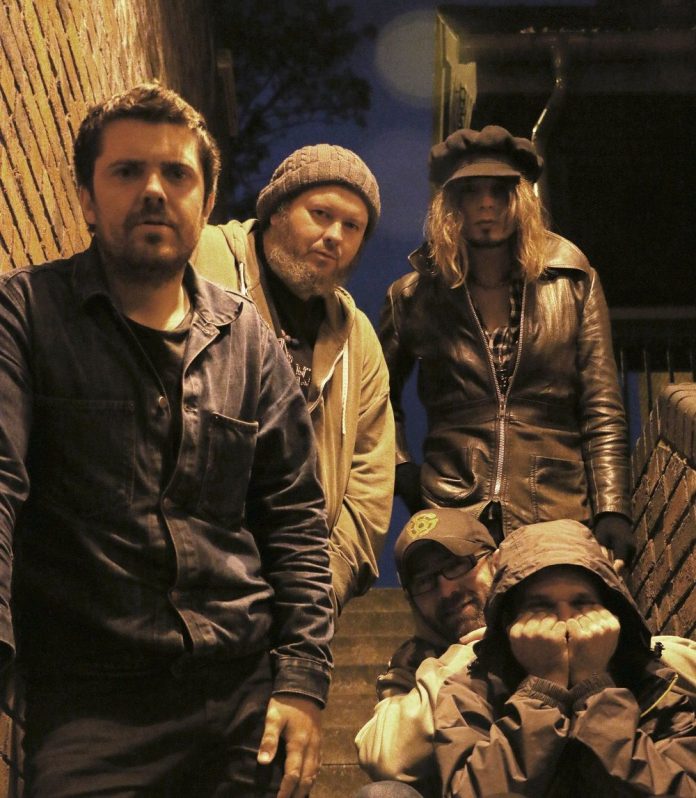 The brilliant Coventry band have just had a re-release  of their album, here they tell us all about it, and we get an exclusive!

First of all tell us just a little of how the band got together?

BC: Me and Parge where in old band together, called Tawt.

JP: When that band fell apart, I said to Bren “let’s get together to do some stuff”, so we put together a little rhythm section with Alex Miles on bass who’s still with us today and our original drummer Peej. This was 2008…

BC: … and about six months later we added a third guitar player, and that was the start of our three guitar attack.

JP: We recorded a demo in 2009 which was a bit more “songy” that we are now… Then we had drummer issues until 2012 when Ben Mochrie joined and we started writing the album then

The album is superb. But what do you put the many disparate influences down to?

BC: Ben added something when he joined, cos we was into the same sort of stuff as us, but coming at it from a different angle.

JP: Before, it was me a Bren writing together, and then it became all of us throwing riffs at each other.

BC: The album is an amalgamation of songs, the best stuff from over the two or three years we were writing it.

Who brings the ideas? How do you write songs? Is it all separate. It doesn’t feel like you can jam them do guys come in with a particular idea?

JP: Usually someone’ll have a riff, and then we’ll just see what happens over the top of it. Whatever anyone else can muster that fits after that will go in, sometimes we’ll make stuff up on the spot… Or its something they’ve already been messing around with at home. But it’s a collaborative thing, most the writing goes on in rehearsal time. We don’t have verse / chorus / verse / chorus songs, so the songs end up being as short or as long as they end up really…

Does the fact you are so different present problems? You often get put on stoner rock bills, but aren’t a stoner band in the conventional sense.

JP: No we’re not. I think the Stoner Rock label is stupid anyway. Personally I like the most of that kind of stuff…

BC: There’s a couple of songs where’s the elements of that…

BC:  Also though it is good to get put into a genre like that in a way because it leads on to other things… It’s sometimes good to be the “different” band on a bill, although sometimes it’d be nice just to be in one genre because it can be a bit confusing for the audience…

JP: Ultimately, you don’t want anyone in the band to get bored of what they are doing. So you don’t want to end up saying “No that’s no Stoner enough. That doesn’t fit with our ethos”… so generally nothing really gets shelved for being not what we do.

BC: There’s enough of that music around.

So now there’s a re-release. Why now, and why this label?

BC: I really thought that we needed some digital, online release. We made a hundred CDs, and it was on Bandcamp, but I thought we should have it on iTunes, Spotify and all that.

JP: We’re living in an age where people stream music…

BC: My old friend Steve Weird, he had a label. He came to us, he knew that we were looking for a way of getting it out to the streaming services, so we agreed to re-release it on Creature Lab.

BC: We did the original album launch, and then our bass player smashed his head open in a bike accident, so there was a lot of downtime. We had a load of gigs lined up that we had to cancel.

JP: We wanted to give it another kick with the re-release, and as soon as possible was the best time! We’ve got gigs lined up now and we’re trying out some new songs too.

I know from speaking to Jon that the guys all have busy family lives, but if it was possible, where would you like to take the band?

BC: I’d like to do more gigs outside Coventry. We got hooked up with some people in Birmingham so it’d be nice to do a bit more of that.

JP: We’ve started recording some new songs so we’d like to finish those… We’ve got a lot of half-songs that need turning into whole songs.

BC: We haven’t spend much time together during the last year… We’ve had a lot of time off, like Red Hot Chilli Peppers or someone taking four years off to get into yoga! We’ve done that really, we’ve had a break…now we want to get back into it.

JP: Yeah we want to do an album a bit like “Chinese Democracy”!

When I saw you play recently, Chris Worsley from Superhooch was on guitar, was this a one off or something a little more permanent?

BC: He’s now a permanent member. That’s an exclusive for Maximum Volume!

JP: Yeah we’re revealing it right now! Wurzul was helping us out for a few gigs, and he was umming and ahhing for a bit but now he feels like he’s got time to commit to the band. So he’s full time member now, and I know for a fact he’s got riffs lined up so I think there may be a bit of Worsley action on the next album.

Which leads me on to future plans. What about the second album? Any ideas? More live gigs?

BC: We’re slowly gonna get new stuff out there, do some gigs. Play some new songs, play some old songs. Hopefully by the New Year we’ll have quite a new set and we’ll try and play around the country a bit.

JP: We just love to rock!

Of all the bands you’ve played with, who has impressed most?

JC Its not easy to impress us! You might be able to impress two or three of us but not many bands get the five Resurrection Man approval… Sounds awful doesn’t it?

BC: Late Starters are really good.

JP: Yeah and we enjoyed the Birmingham gigs, Morass of Molasses were really good. Should definitely give Charles Dexter Ward and the Imagineers a shout.

BC: Dead Meadow… that was a really good show. They’re a cool band.

Do you have anything else you want to say?

BC: We just don’t want people to forget us!

JP: Yeah…we don’t know what direction we’re going in, or what road we’re on, but we are moving forwards!