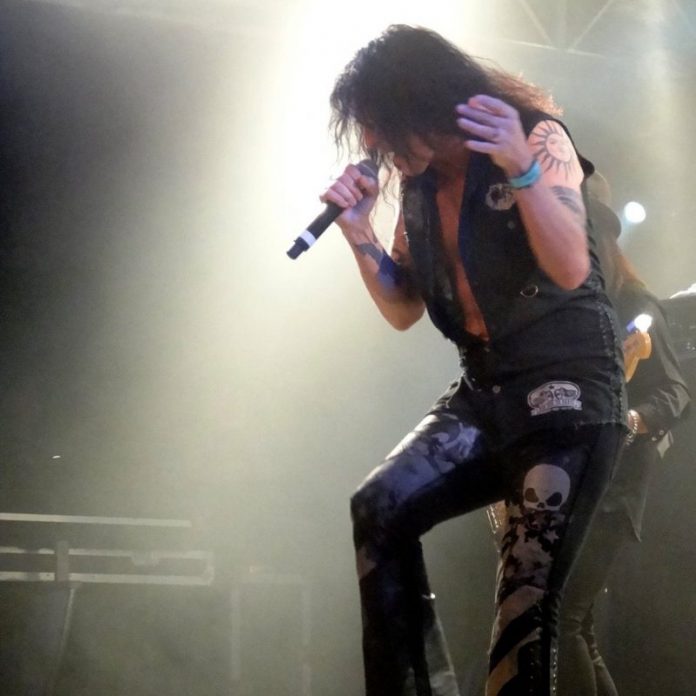 The Love/Hate frontman on the forthcoming UK tour, being out of anniversaries and being kept from his breakfast

You were the first band I ever saw live. Opening for Skid Row at the NEC in Birmingham on November 20th 1991. If I’d said then that you’d still be playing those songs 26 years later what would you have thought?

Well that’s nice, we broke your Rock n Roll Cherry! To answer your question, no I really did not think I’d be celebrating an anniversary so far in the future. Back in 1991 all I cared about was the Hammer of the Gods. Now I’m as old as Papa Zeus myself…isn’t that ironic?

Moving on to the tour itself….It marks the anniversary of “Wasted In America” does that mean you will focus more on those songs?

Yes I am playing the whole Wasted in America record in full, a first for me. And of course all the Blackout in the Red Room sing-a-long songs. Lots of Rock.

Tell us a little of the band you’ve assembled for this run?

I know you have said that this is you playing Love/Hate songs and not a Love/Hate show, do you feel obligated to keep that band alive?

I don’t feel obligated to do anything, if the music sucked nobody would be interested anyway. The loyalty of the UK fans are what keeps the L/H legacy alive.

Then to the wider question of the music industry. I read a quote from you on your Facebook page about the music industry: “It seems like a dream that 25 years later the music business has gone from that to begging people for money on the Internet.” From that do I assume that you are against the Pledge Music route bands take?

I am against the idea of a ‘Free Ride’—that is, young bands who aren’t ready to make a record asking for others to foot the bill. Back in the day we made demos that were demos not records. We might have thought we were good enough but we weren’t. When we were ready the record deal came—if a band is good enough and ready they will get the attention and hopefully the record.

Given what you say above, how do you feel about sticking out a new solo album this year in that climate?

New music is necessary for the World to turn, besides I’m all out of anniversaries!

If I could just ask a couple of other questions about your career…As a boy growing up, dreaming of being a rock star, have you managed to achieve all your goals from back then?

I achieved more than most people could ever hope for, Fame, Glory, the million and one things that go along with that. And the best part is that I am still carrying on in 2017 and singing better than I did in 1990…that in itself is an achievement!

I was lucky enough to be in Las Vegas back in 2005 to watch you front Ratt and you’ve done many, many things, but which album or period in your career do you look back on with most fondness?

The Blackout in the Red Room record was the best period, only looking upward, no pesky record company interference, dreams intact. The best part is we still have all that music and all those records, something we shall always have.

How is the new album shaping up?

Very nice. The songs do hearken back to the ‘Blackout’ period, high energy and lyrical sarcasm abounding. I’m looking forward for everyone to hear it.

And lastly, what is left? What would you most like to still do?

I’d like to eat my breakfast which this interview is keeping me from!  Ha ha …thanks and see you in the Sunny UK!