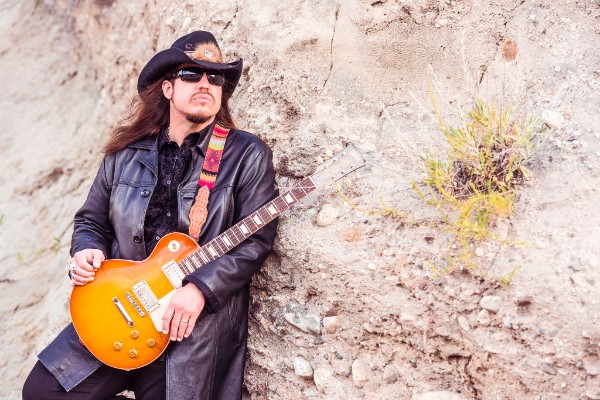 “King Of The Delta Blues Singers” was the very first Blues album I ever owned. I saw B.B. King and Stevie Ray Vaughan play a concert in Dallas when I was 12 years old. The very next day I had my Mother take me to the record shop and I bought this album on cassette. I wanted to start at what I thought was the very beginning of the Blues. I listened to this album over and over, day and night. I absorbed every note of it. “Cross Road Blues”, “Terraplane Blues”, “Stones In My Passway” and “Traveling Riverside Blues” were some of my most favorite tracks. I had an old beat up acoustic and I began trying to figure out how he was playing all of the different parts at once. I couldn’t really figure out the open tunings he was using. One night I fell asleep listening to this album on my headphones and I dreamed that I met Robert Johnson in the middle of a field and he taught me how to tune my guitar to a chord. The next morning I woke up and I tried to tune my guitar by what I learned in my dream and it worked!

2. Elmore James “Shake Your Money Maker: The Best Of The Fire Sessions”
One day I was having lunch with Billy F. Gibbons and we began to talk about Elmore James and how much we loved all of his recordings. Billy then stopped in the middle of eating and pulled out his iPhone and emailed me the track “Sunnyland” from this collection. Billy said I want you to go home and learn “Sunnyland” note for note and don’t come out of room until you do (laughs) I have had a lot of different “Best Of” collections and many different versions of ‘Dust My Broom” but the Fire Sessions were just special. When Johnny Winter was teaching me slide guitar everything was in Open D tuning. I asked Johnny why everything we were playing in Open D, he didn’t even look up he just said “because that’s how Elmore James did it!”
3. B.B. King “Completely Well” –
There are so many great B.B. King records and one of the most highly influential of course is “Live At The Regal” However, “Completely Well” was always my personal favorite. I loved the live sound of the album were you can really hear the interplay of B.B. with his band in the studio jamming. Of course the ultimate song that everybody knows from this album is “Thrill Is Gone” but there is so much other great material. One of my most absolute favorite tracks is “No Good” I think it’s absolutely one of B.B.’s best and one of my favorite albums in which I learned so many licks from
4. Albert King “Years Gone By” –
“Years Gone By” was the first Albert King album I ever owned and it is still so influential and impactful on me today! How can you beat Albert King being backed by Booker T. and the MG’s in 1969? The funkiness of “Killing Floor” and “Cockroach” is worth the whole album, yet there is the heavy slow blues of “Drowning On Dry Land” and “The Sky Is Crying”. When I first heard this album I was in almost the same shock and awe I felt when I first heard Jimi Hendrix. It was so powerful, the tone was so big and every note was to the point…it was everything I had been searching for an electric guitar to sound like…
5. Freddie King “Getting Ready” –
Freddie was our hometown King! Being from East Texas and Dallas you always run into someone at a Blues club back home that either played or saw Freddie play. Somebody always has a Freddie King story and they are always great! They usually involve gambling and serious Blues guitar tone (laughs) “Getting Ready” encompasses everything that there is that one would need to know about Freddie King! The big voice and the big tone! This collection offers the timeless Freddie classics like “Going Down”, “I’m Tore Down”, “Palace Of The King”, and “Five Long Years”. This album shaped the way I play lead guitar.