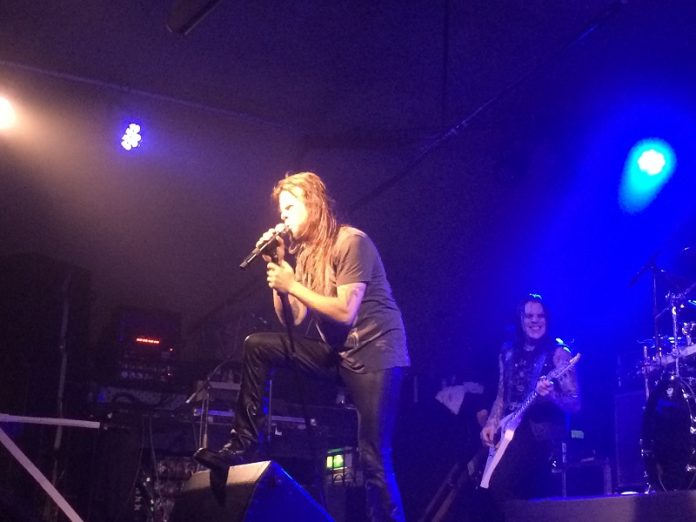 At MVM we like trio’s. We like thrash metal too – and to be even more specific we really like Megadeth. On that front then, Megadeth obsessed trio Archer Nation can’t really lose. Indeed, they aren’t even hiding their adoration for Dave Mustaine’s men. One of their number – singer/guitarist Dylan Rose – even sports the t-shirt as well as sounding rather like king of the sneer. Thing is, they do it rather well and given they are young and full of chutzpah they intersperse things with a kind of early Motley Crue sheen too. AN might be here for a good time, but they are up against a partisan crowd, however sheer energy wins through and songs like “The Day That Never Came” are enjoyable, fists in the air affairs. They even find time for a cover – Megadeth naturally – but “Tornado Of Souls” strays from the obvious and is superb. The sound might be familiar, but the arrow here is often on target.

With his dark glasses and leather trousers Todd La Torre  looks every inch a rock star. The second he opens his mouth, he proves it. There’s a reason that the Seattle heavy metallers decided to use him as Geoff Tate’s replacement, and its simply this: he’s magnificent.

It’s been a few years since MV saw the band – a real lacklustre display with Judas Priest as Tate was off his game. The difference in them tonight is palpable. This is a band that crackles with energy, fair old fizzes with excitement and is proving just how good they can be.

One of the reasons for that is last year they stuck out a record in “Condition Human” that saw them come close to reclaiming former glories. They start tonight’s career-spanning set (it packs in songs from eight albums in its roller coaster 75 minutes) with “Guardian”, a track from it and throughout, it is a well-paced and well thought out affair.

It is soon into the classics and “Operation: Mindcrime” and “Best I Can” sound mighty, as do the still huge ballad “Silent Lucidity” and the even better “Empire” which follows in a kind of 1990s 1-2 punch.

But its more than that. There’s a moment in “Eye9” another new track, Michael Wilton grins to himself, and almost at that moment you realise with him that even if you stripped away the history and all the back catalogue, then what you’ve actually got is just a magnificent grown-up heavy metal band. And for Wilton and his fellow founding members, Scott Rockerfeld and Eddie Jackson, that must mean everything right now.

The set hurtles to a close with “Jet City Woman” and “Take Hold Of The Flame” and the encore keeps it old-school too, with “Screaming In Digital” and a wonderful “Eyes Of A Stranger”.

As he exits the stage after the latter, La Toure shouts: “We are the original and only Queenscryche”. A clear dig at Tate and his “other” version, the singer says it in a way that suggests he doesn’t want to be argued with – on this evidence, however, you wouldn’t dream of doing so.

A band reborn and revitalised.