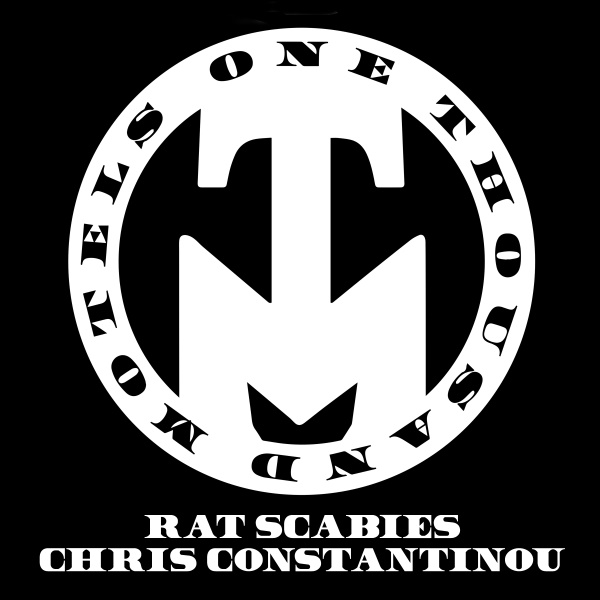 Rat Scabies, the famed drummer for The Damned, and Chris Constantinou, a much in-demand bass player who has worked with Adam Ant, Sinead O’Connor, Bow Wow Wow and others, have come together for a brand-new project, One Thousand Motels! This is not the first time these two creative forces have united their musical powers. They were both heavily involved with the punk rock supergroup The Mutants, which featured members of UK Subs, The Specials, Vice Squad, The MC5, Stiff Little Fingers.

While in NY making another album, Rat & Chris found themselves with some downtime. Chris explained “We had finished the album and the bars were shut. I had a bunch of demos lying around which were just waiting for the right drummer.” As soon as he heard the tunes, Rat was onboard and instinctively got on with it and within a few days they had the bones of the album that would become 2% Out Of Sync.

“Chris writes from the heart and shares his ups and downs, which are often butt clenchingly awkward,” Rat explained “He writes about his loves, losses and good times, which often play out like a Jaques Brel movie (if there were such a thing).” Chris responded with a simple “My songs are about my experiences, what else have I got to write about?”

They finished laying down the drum tracks in Glastonbury at Orchard Studios while Chris overdubbed in a shed in his back garden. “There were times,” whines Rat “when we’d blown all our money and it felt like it was time to call it quits, but I’d listen to the rough mixes and felt it would be a dreadful waste not to finish this record – the tunes are just too good.”

Eventually the recordings were finished and Nicholas De Carlo was invited to mix the album at his privately owned “Mash Studios” in Ramsgate, Kent. “We were totally over the moon with the way Nick De Carlo made us sound” said Chris, “He brought an organic feel to the mixes and created a sound that is both proficient and natural and which crucially leaves my melodies alone.” “Yeah, for sure” added Rat, “NDC gave it some bollocks.”

When asked about the choice of name for the new project I think Rat summed it up best when he said “We’re too old and battle worn to be making career moves, so we wanted a name that immediately summarised where we’ve come from, but not necessarily where we’re going.”

Ladies and gentlemen, we give you One Thousand Motels.

For further information One Thousand Motels can be contacted via Facebook: https://www.facebook.com/OneThousandMotels/