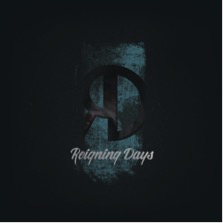 New EP out in June

Devonshire three-piece Reigning Days have revealed their crushing new single‘Empire’, to be taken from the band’s self-titled EP, out on June 3rd. The band also set out on a jam-packed run of UK festival dates this summer, and will release their massive debut album later this year.

Expanding on the band’s already stratospheric sound, ‘Empire’ takes things up yet another notch, with even more bombastic riffery, made-for-radio choruses and a display of musicianship that puts the band way ahead of their contemporaries.

“Reigning Days are writing music that’s so SO good, it sounds like they’ve been a band for years and they’re already doing stadium tours.” – Alex Baker (Kerrang! Radio)

The new EP also features both previous singles ‘Renegade’ and ‘Friendly Fire’; two searing tracks released to high critical acclaim. Both tracks leapt straight into the Top 10 in the Kerrang! Charts and Scuzz TV charts as well as featuring on radio playlists around the country, including Planet Rock and being played on the Radio 1 Rock Show. The EP is completed by another brand new track ‘Crazy Horse’.

Reigning Days have spent the last few months on the road, touring the length and breadth of the UK alongside the likes of Wilson and Highly Suspect. Not ones to take a break, they have UK festival appearances booked at Download Festival, The Great Escape, Dot To Dot, Live At Leeds, Camden Rocks, 2000 Trees, Y Not Festival, and an Academy Showcase at BBC Radio 1’s Big Weekend, all alongside a whole host of huge global acts.