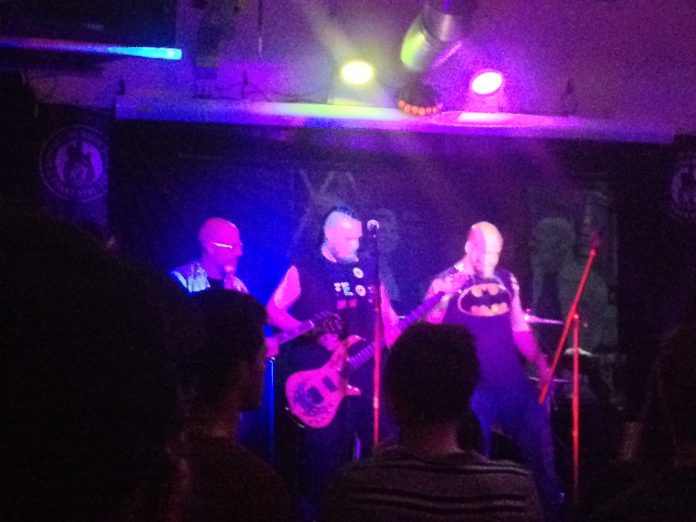 Beckon Lane haven’t down the M1 to die wondering. The Nottingham four piece are muscular and thumping from their opening riff. But then so are a lot of bands. What gives this particular brew a touch of difference is singer Lewis Phillis’ voice. The classic rock element it has adds a timeless quality. That is to say trends may come and trends may go, but there’s always going to be a call for someone who can howl a little somewhere between Dio and Myles Kennedy. New single “Divided” has a bassy rumble as live four stringer Andy Goulter comes into his own. New song “Fire” soars off in a most pleasing way, while the last song grooves like Gun used to back at their best and manage to distill all that’s rather good about hard rock.

Last time MVM saw Captain Horizon it was their big night. Supporting here, it’s just an opportunity for the Brummies to show how good they are. Which almost makes this set an open goal. See, they’ve got songs that care not a jot what other bands do, in favour of sounding like Captain Horizon. “Shadows And Vampires,” that’s got a chorus to kill for, and “Patch,” well, that’s better still, and “The Light” is an epic packed into four minutes. Combine this with the occasional swagger, like set closer “The Dark” from their brilliant “Imitation Sun” record, just because rock n roll should swagger and think it’s in stadiums sometimes, and they are something special. Four musicians who could do just about anything, it’s just that what they choose is this. Captain Horizon then: Standing their ground in their own damn way. Which come to think about it would be a good line in a song….

Speaking of hard to quantify…. Since London based five piece Sumer released their “Animal That You Are” album last year, people have been almost queuing up to tell you how good they are. Ask the same people what the band sound like and there are blank looks all round. In the spirit of having a go, it befalls on MV to, well, have a go. The closest we can get is if Meshuggah had clean vocals and played some Tool songs it might be a bit like this. Yep, in short we don’t know either. What is clear however is the title track is brilliant and closing number “End Of Sense” is an incredibly ambitious prog rock song. Not even the slight technical difficulties that befall them – damn those guitar strings – can hold them back. We might as well say what everyone else has, Sumer are a band you must see.

The projector screen playing “Angel” – a song from their new EP – before they come on is one clue. The packed crowd is another. But this night is clearly very special for Resin. It’s a night that the two original members Si and Mark perhaps never thought they’d see, after the original incarnation of the band disbanded last year. Now they are not only back, but they have the awesome “Persecution Complex” record in the bag. If they are nervous it doesn’t show. New singer Dave Gandon is perfect for their sound, with his deep rich, Scott Weiland-esque tones. Starting with “Printing Money” from “….Complex” they move confidently through a set with the ease of five blokes who can do this with their eyes shut. Give or take the odd set of issues, there is much – as there always was – to like about Resin. What they do always sounded like it was playing Wembley rather than The Dog And Duck and songs on their debut “Embrace The Fallen” album like “Fallen” and “Fake” still think they’ll make it there.

What tonight deftly does, is meld the old with the new. And should there be any doubts as to the future “Open Heart Trauma” wipes them away in about four and a half minutes. There’s even an unreleased song, and “Monster” is a real highlight. It also closes the show. There’s no encore, there’s no need. Far from being a band on the comeback trail, Resin are one with their best days yet to come.