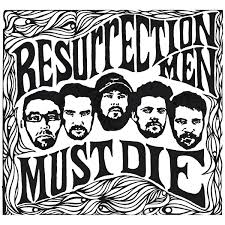 Music in 2015 has to run along strict genre lines, right? No one told this Coventry band

It’s a fact in this modern age that everyone is busy finding a genre to hook something on. Everything has been done, runs the received wisdom. Nothing is left that’s original. So it is we find ourselves down a cul-de-sac where everything that doesn’t end in the suffix “core” is “post” something. Post Ambient Black Metal was one such sack of nonsense that someone said the other day. And woe betide anyone that steps outside their box.

There are of course certain mavericks that take that idea and kick it’s face in. The best bands always have. And no one dare tell Coventry’s Resurrection Men how to sound. If this boys were tied to a genre it would be called Resurrection Mencore, because quite frankly what they do on this debut defies any sort of description – and moreover it doesn’t appear to want one either.

This debut eight tracker is quite unlike anything you have heard recently that’s for damn sure. Not since the glorious days of Faith No More have a group of men so wilfully blurred the boundaries – and evidently had so much fun doing it.

The five reprobates that make up this band call their music Fraggle Rock, and furthermore reckon that “between us we like just about everything.” They aren’t kidding.

Opener “This Guy Played Milan” is mostly instrumental and mostly punk rock sounding, it’s followed by an almost quasi Indie Rock thing called “She’s The Device” which is part The Virginmarys and part Troublegum era Therapy? But if you think you have RM pegged then think again. Because what comes next is truly majestic. “Tears Of A Wizards Funeral” is full-on Sabbathy down tuned sludge.

All of which rather sets the tone for what follows – because rather pleasingly on the remaining five songs they just chuck everything at the wall, see what sticks, and make a nice collage out of what doesn’t.

There’s instrumental passages, more stuff, particularly “(Fight For It) Now” that riffs like Fu Manchu one minute and is catchy as the flu the next and there is an absolutely glorious thing called “Make It Home” which the aforementioned FNM would have been thrilled to call their own.

It all finishes with yet another stoner metal romp – “Forty Days” – which includes a drum solo, seemingly because, well, why the hell not?

And it is barmy, bonkers, brilliance from start to finish.