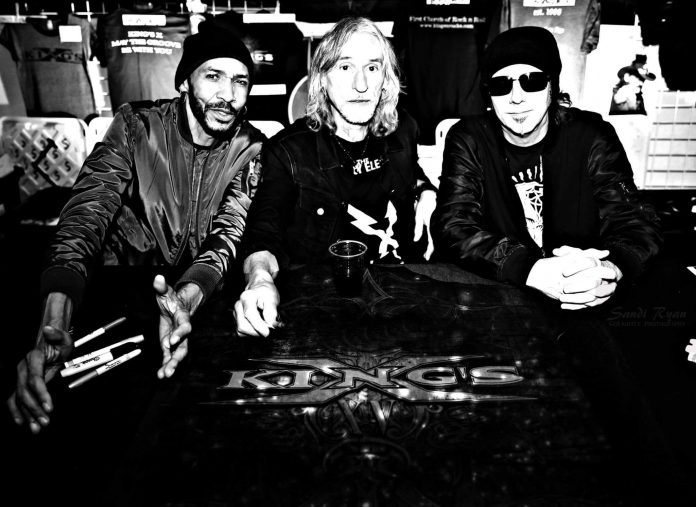 Rock legends KING’S X are thrilled to announce that they are entering the studio to record their highly-anticipated new album – the first to be released in over a decade – scheduled to drop this year via Australia’s leading international independent record label, Golden Robot Records.
The label announced their global signing of KING’S X in December.

Today, KING’S X enters Blacksound Studio in Pasadena, California with renowned producer Michael Parnin – recognized for his work with a varied range of artists, from Rage Against the Machine and Missy Elliott, to Andrew Lloyd Webber and Barbara Streisand.

Commenting on how it feels to be returning to the studio after 10 years, dUg Pinnick says, “Good question! I haven’t thought about it much, been super busy. But got a ton of tunes to submit. I never know what to expect. I’m always surprised when it’s done and can see it as a whole picture. And we’re making a record after how long?! I’ve been waiting for this to happen for a very long time, and I’m totally looking forward to it.”

Jerry Gaskill adds, “It’s been a while since we’ve made a record together. I go back and forth between excitement and fear. But when it gets right down to it, I think excitement wins. I look forward to sharing all of our ideas together and seeing what comes of it all. If nothing else, it will be the next KING’S X record.”

Ty Tabor says, “I’m excited to see where we are at these days. We’re all bringing ideas in.”

Michael Parnin adds about recording the new album with KING’S X, “A great story in the making… As a huge fan of the band from the beginning, I am unbelievably excited to work on the next long-awaited chapter. Some of my favorite and most artistically rewarding projects have been working with dUg over the past 10 years, namely “Strum Sum Up” and the fun Hendrix Tribute Album we did together… Likewise, I’m honored and looking forward to working with Jerry and Ty who are each masters of their craft.”

Derek Shulman, Executive Chairman of Worldwide Expansion for Golden Robot Records adds, “I am delighted to finally be able to work with one of the most respected, creative rock bands of the past 30+ years. KING’S X is not only a superb rock band with an ardent fan base, but are also a ‘musician musicians’ band. Golden Robot Records is determined to finally help KING’S X receive the worldwide recognition it fully deserves.”

Since the release of their debut record, Out Of The Silent Planet, in 1988, KING’S X released over a dozen albums that have seen them rightfully earn their place on the rock royalty family tree. Fusing progressive metal, funk and soul grooves with vocal arrangements rooted in blues, gospel and even the British Invasion era influences, KING’S X created a style all their own which continues to be an inspiration for bands to this day.

Featuring vocalist and bassist Doug Pinnick, guitarist Ty Tabor and drummer Jerry Gaskill, KING’S X have never changed their line-up, a rarity in the music world and a testament to the band and musicians and friends.

Critically acclaimed from the start, KING’S X are musician’s musicians, name-dropped by everyone from Anthrax and Suicidal Tendencies to Iron Maiden and Blue Murder for their instrumental prowess. Pearl Jam’s bassist Jeff Ament even declared that “KING’S X invented grunge”. They also enjoyed a long life via the David Letterman Show with their track, “We Were Born To Be Loved” (from 1990’s Faith Hope Love), also a favorite of the Paul Shaffer’s CBS Orchestra to play during commercial breaks.

In 1992, KING’S X signed to Atlantic Records/Megaforce Records, released three albums and toured with bands as diverse as Scorpions, Type O Negative and Pearl Jam. In the early 2000’s, KING’S X released three studio albums and their first official live album via Metal Blade Records. In 2005, the band signed to German-based progressive music specialty label, InsideOut Music, and released Ogre Tones, an album described as a return to the bands classic sound. KING’S X forged ahead with new albums, DVD’s and tours up until 2012, when drummer Jerry Gaskill suffered a major heart attack. The band then quickly compiled an exclusive live release from their archives entitled, Burning Down Boston. The proceeds of which went directly to assisting Gaskill with his medical expenses. They rolled on for two more years until Jerry suffered another heart attack, which resulted in him having a double bypass operation and ultimately led to the band taking an indefinite hiatus.

This break didn’t last long, as they were back on the road in mid-2015, shortly afterward announcing they would begin work on a new studio album. This would be the band’s first since 2008’s XV. KING’S X began meetings with Golden Robot Records management in Los Angeles in early 2017, eventually signing a global deal in October 2018.

While it’s been a decade since KING’S X have released a new record, the wait has definitely been worth it! Watch this space for news on the forthcoming album in the very near future.