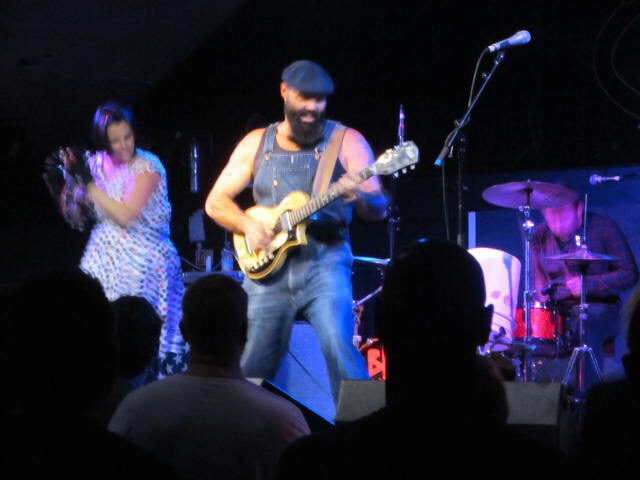 A little bit of Brown County hits the Midlands

Let’s get right to it, shall we?

At the end of this gig – somewhere towards the end of “Two Bottles Of Wine” as a matter of fact and after an hour and a half or so of rip-roaring fun – a woman sets fire to a washboard. Oh, and the crucial thing about this is that she was playing it at the time.

Hell naw, as the Reverend Peyton might have said. Certainly he’s married to the woman “Washboard” Breezy, and together with drummer Max Senteney, they are The Big Damn Band. They are also damn good.

One of the hardest working bands around, playing on average 250 shows a year, this is reckoned to be their fifth visit to this venue. There’s been a steady increase of fans in that time too and there’s a more than decent smattering of punters tonight.

The three basically take country and blues and make it primal again. This is roots music back to those roots, “We Live Dangerous” is a white knuckle ride through music history and “Let’s Jump The Train” is as simple as it is effective.

A clutch of songs from their most recent “So Delicious” record. “Hell Naw” has given them a genuine hit in their homeland and is catchy as a the flu, while “Front Porch Trained” hides a greater truth.

Because for all the “aww shucks”, as-American-as-a-moms-Apple Pie-cotton pickin’-thank-you ma’am – shtick as exemplified in that song, Josh Peyton, The Reverend to you and me, can really play whatever instrument he picks up. Unreleased instrumental “Bean Blossom Boogie” features some mighty fine playing – but crucially he knows not just how to write great songs but how to interpret old ones exceptionally well.

To that end he’s just as happy playing old blues standards like “My Baby Left Me” and Bo Diddley’s “You Can’t Judge A Book By It’s Cover” as he is his own material, so “Pot Roast And Kisses” (“my favourite song on the last album, no one agrees so I’m gonna play it at every show till they do…..” He jokes) is outdone in the sentimental stakes by “We Deserve A Happy Ending”, a gorgeous little track from the forthcoming record.

You suspect, however, that this is a band that just wants to rouse the rabble and have some fun. “Raise A Little Hell” would drink your liquor before you knew it was there and the breakneck encore of “Mama’s Fried Potatoes” and clear audience favourite “Two Bottles Of Wine” offers a chaotic end.

It’s at this point that Breezy sets fire to her washboard and they promise to be back, and that means the little old band from Indiana can do this all over again.