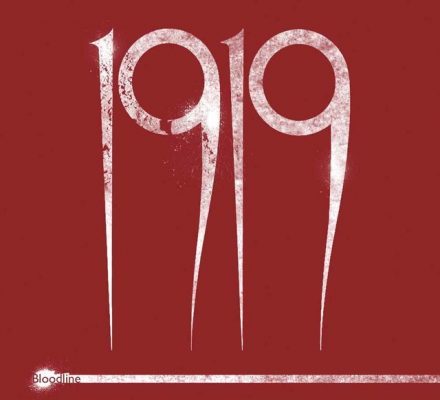 Bradford’s goth post-punk pioneers return with album number two a mere 33 years since their debut. Much has changed. Nothing has changed.

For those unfamiliar with the limited 1919 output over the past four decades the band had some success in the early part of the 1980’s with singles “Caged”, “Repulsion” and the classic “Cry Wolf”. They recorded their debut album Machine which was released in 1983 as well as recording two sessions for keen admirer and uber-fan John Peel. Coming from Yorkshire, which also produced bands such as New Model Army, Sisters Of Mercy & Southern Death Cult to name but a few, it was easy, at the time, to see where they would fit into the increasingly populated and varied British music scene.

However, bands don’t always end up following the path laid out for them. Some forge their own, some split before reaching their potential and others crash in a blaze of glory. 1919 recorded one well received album and then, after a couple of years of touring, promptly called it quits.

After 30 years of inactivity founding member and guitarist Mark Tighe felt the urge to reform the band and gathered together drummer Mick Reed and bassist Karl Donner. Leeds underground stalwart Rio Goldhammer was recruited to complete the quartet. An EP entitled “Death Note” was released to much excitement and the future seemed to be very bright.

Sadly, this album stands as a stunning tribute to the vision of Tighe, who tragically died less than a month after a brief but brave battle with cancer. His diagnosis led the band to cancel tour dates in autumn 2016. Tragically he was not to win his war, after initial optimism that he might beat this cruel disease it was not to be. However, he has left us with wonderful music to savour and Bloodline is no exception.

It is hard not to be transported back to the heady days of the early 1980’s when first listening to this album. The band have the same drive, intensity and lyrical acumen as they did in their youth. Not many bands can say that after a 30 year break and it is that spirit, allied with quality songwriting and musicianship it must be said, that sets this album apart from similar bands trying to recreate their glory days.

The opener “Bloodline” is a great indication of the style of the album this is to follow. Jagged guitar rhythms backed by pulsating drum beats and dark bass lines that drive the songs forward in almost military precision. When tracks like “The Vanity”, “Inquest” and “Retrograde” follow then it is clear that the band have come back with renewed purpose and clear direction. This album could have been made 30 years as the follow-up to Machine however, good things come to those who wait.

“Zeitgeist” is an mid-pace attack on celebrity and sensationalism in all it’s gory forms. Whilst “Dissaociation” picks up the speed and surges onward with anthemic vigour.

When the sweeping album closer “Life Is…” brings an end to the 2017 version of 1919 then it is not without a sense of what success the band could still achieve, although sadly it will be without Mark Tighe. His memory though is very well served through this album.

Tighe himself probably said it best when writing about the band and what made them what they are.

“1919 was four Northern souls desperately different in temperament but with a much focused musical vision, which Attila the Stockbroker once described as “Stockhausen on guitars with some long lost tribe on drums”.

Hard to argue with that.

Bloodline is out on 3rd March 2017 through Westworld Recordings.