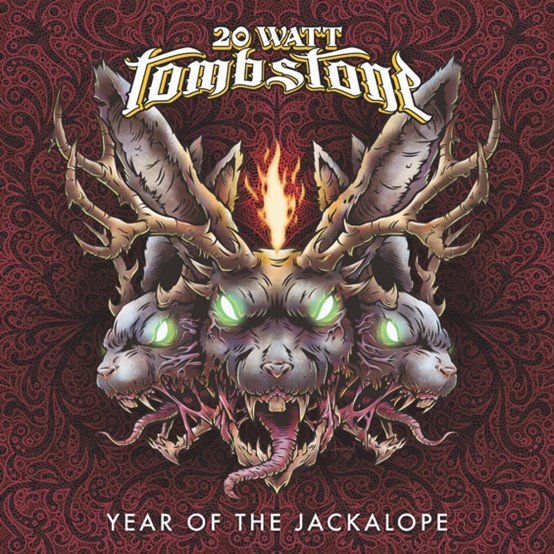 Since featuring on MaximumVolumeMusic back in 2016 with the release of their excellent debut ‘Wisco Disco’ and the ‘Death Blues vs The Dirty Spliff’ split album with Left Lane Cruiser, I for one have been waiting for more 20 Watt Tombstone music to arrive. In the time since they continued to tour relentlessly and that included a first visit to Europe in 2019. Unfortunately, the UK was not viable on that Tour  but I was lucky enough to capture a show on the Continent and they didn’t disappoint. The show was loud, raucous blues at its best and they showed their Stoner Rock influences with a terrific Kyuss cover at the end of the set.

Obviously the current pandemic has killed touring for working Bands and it is proving a hard hit financially for all. However, if there is an upside it is perhaps that staying at home has created time to record new music. I think it is fair to say that 20 Watt Tombstone don’t find the writing process easy but a recent post on Social Media announced that a new album is progressing well with 8 songs taking shape so far.

In the meantime, they are releasing this two song EP featuring a couple of their favourite cover songs from Artists that are an influence on their music. It is clear that Kyuss are a big part of this Band’s sound and it comes as no surprise to also see a ZZ Top cover appear here, as that influence is just as obvious. They have chosen the well-known ‘Just Got Paid’ and it actually lends itself perfectly to their style. The real difference is that where the blues are ZZ Top’s jumping point for this song, it is the afore mentioned Stoner Rock for the 20 Watt Tombstone version. The guitars are loud and fuzzy, making the main riff a thing of beauty. Singer/Guitarist Tom Jordan’s vocals are stylistically not unlike those of Billy Gibbons and the same can be said for the slide solo. Drummer Mitch Ostrowski does his bit too, keeping things together without getting too busy.

Whilst ‘Just Got Paid’ is exactly the sort of cover you’d expect, I always prefer it when a Band takes a lesser known song and makes it their own or picks something from a different genre that is able to cross-over. On this EP that is exactly what they have done with an absolutely brilliant cover of ‘Midnight Train To Memphis’. Chris Stapleton is perhaps not someone I’d obviously associate with 20 Watt Tombstone’s musical style but I know that they guys are big fans. This song appeared on Stapleton’s ‘Room With A View Volume 2’ but the song goes back further than that. It actually originated in 2008 on an album from  Stapleton’s former band ‘The Steeldrivers’. It is a co-write with Nashville blues great Mike Henderson (who remains criminally unknow in the UK – check him out all you Joe Bonamassa and Walter Trout fans). The Steeldrivers were essentially a blue grass band with elements of blues, folk and country thrown in the mix. The style of this new cover is actually more akin to another of Stapelton’s Bands, ‘The Jompson Brothers’. Their album was released in in 2010 and it is a classic Southern Rock album that seems to have flown under the radar. The big riffs of that album have provided the starting point for 20 Watt Tombstone’s cover and they have taken it from a picking country song into something closer a Blackfoot/Zakk Wylde hybrid.  Stapleton’s 2017 version is also more rock orientated than the original but it remains comfortable within the confines of his current country flavoured albums. I suspect that this becomes a different thing altogether when Chris Stapleton plays it live and for this reason I also hope it is part of future 20 Watt Tombstone shows. It is an inspired choice of song and the guys do it full justice with their performance.

Now all they have to do is get that album finished!