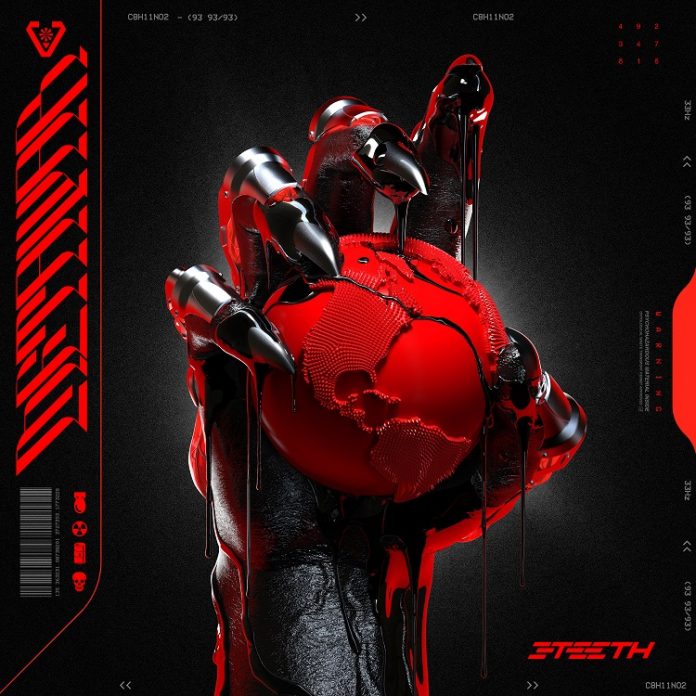 It seems to me, the times we live in, are good only for historians, political watchers, or the rich. The last facet, of course, is ever thus – and that, my friends is capitalism.

Whether its here, in the UK where anyone with an actual brain cell is hoping that someone who attempted to destroy the NHS is elected Prime Minister such is the hell that the other one is about to unleash, or over there, where the images of a father and his young daughter face down, in the Rio Grande greeted us the other morning, it feels like the apocalypse is coming – and fast.

Into this, step 3Teeth.

They are a band that want to do more than merely entertain. A “multimedia project built into the chassis of a band” is how frontman Alexis Mincolla puts it.

And, just as much as the fury of hell seems ready to be unleashed on us on a daily basis, then the confusion, the maelstrom and the downright brutality of the modern world is shot through these 13 tracks – note, you can’t really call them songs.

You can’t call them songs, because songs by implication suggests some jollity, some enjoyment. Does this sound like that to you?

Musically, this is harsh. Desolate, and as far away as you can imagine from “rock n roll” or whatever you want to call it. “Exxxit” is deeply unsettling, and in this regard you have to credit producer Sean Beavan. Famed for his work with, amongst others NiN and Marylin Manson, this has sonic similarities with both – indeed, you almost wish Manson had the balls to truly shock like this these days.

“American Landfill” begins with the words: “you gonna buy American next time?” and is like one of those Rob Zombie remix albums where everything sounded like your worst nightmare, and the general feeling that this really isn’t for children’s parties is all over “President X”.

“Metawar” sidesteps neatly making partisan points, instead there is a general nihilism here, a general suggestion that they’re all as bad as each other and we need to take control, “Time Slave” begins – as many do here – with ominous chanting, this time “protect and serve” is the mantra, and crushes. Guitarist Chase Brawner does a (literally) mighty job throughout.

For all that this eschews conventional wisdom and structures, then work like “Bornless” is nonetheless going to sound superb live, and if “Surrender” lurks in the shadows, then “Sell Your Face 2.0” is overt in nastiness.

It feels like “Blackout” – which wouldn’t be out of place on a film score – holds the key to the collection: “I’m on my way to so much more than pleasure” seems to convey the whole vibe of the record and band and although you wouldn’t call “The Fall” of a “ballad” as such, then to be fair, it does collect its pound of flesh in a more gentle way.

There’s a reason 3Teeth went from tiny clubs to 20,000 people in arenas with Tool almost overnight. They’re very, very good. “Pumped Up Kicks” almost has a swagger, proud to be what it is, and is designed with those type of arenas in mind.

Not pleasant. Not calm. Not fluffy, warm – or in a very real way – even enjoyable in any received sense of the word, “Metawar” is nonetheless brilliant. And this is a battle that no one here intends to lose.