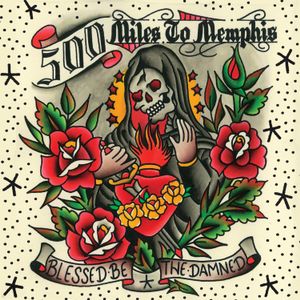 At the risk of repeating myself, it has always annoyed me how much cooler American place names are than UK ones. 500 Miles To Memphis are so named because Ryan Malott chose the band’s moniker after being inspired by the distance of his hometown (Bethel, OH) to the town of Memphis, TN.

Where I live is about 10 miles from where Tony Iommi was the day he sliced the top of his finger off and invented Heavy Metal as a result. Not Far From A Factory In Aston isn’t particularly catchy though, is it?

But then, jealously aside, there is much to love about 500 Miles To Memphis. Top of the list is this: They don’t sound like anyone else. At all. Or at any point.

The press release came and said “Americana Punk” and I am sat here thinking, “ok yeah, piece of piss, chuck in some references to Jason And The Scorchers and we’re all good”.

Then you listen to the first song “The River” and you basically discount that idea from the get go.

“The River” is some raw, visceral Gospel to start with, but you best believe there’s some proper power chords here and by the time the guitar hook hits, you will be reaching for a Gaslight Anthem record.

But then, they follow this up with “Bonnie” which is part oom-pah band and part hoedown, and whilst in truth, you haven’t really got a clue what is going on, it’s so catchy that you can’t resist its charms anyway.

Better still is “Hold On Tight” which is cheerfully punk rock, while “I Said Babe” is a slice of middle American blue collar – or at least it would be, until the guitar sweeps in with genuine heaviness.

Because there’s absolutely no point in bullshit – good god, this record deserves the truth anyway – the press release says that “Blessed Be The Damned “ is 500 Miles To Memphis’ fifth record, I haven’t heard the other four (clearly this is being rectified). It also says that this is the first time they’ve all sat down to write an album as opposed to Malott writing all the songs. This new-found cohesive approach shines through on the brilliant and Celtic flavoured title track and the then even better “No Doubt About It”, which manages to distil everything that is great into three minutes.

There’s a bluegrass flavour to “In My Chest” – only if Bluegrass was played by Motorhead, though –  while “Save Me” has the same huge intent as Augustines used to have back in the day, albeit they never quite screeched with the six string like this.

One of those albums that likes to do things at a million miles an hour,  “What A Waste” hurtles for hell as fast as it can,  and it is telling that when they do things at a slower velocity, it is for a ballad called “I’m A Bastard” that is sort of like The Hold Steady jamming with The Dropkick Murphy’s, the contrary so and so’s.

500 Miles To Memphis have constructed something wonderful here. As befits someone 500 miles away from the home of all of this, it feels like they know their roots, but are still proudly outsiders. 15 years ago or so my brother and I went to see a band called Marah, who we loved so much we nearly formed a rock n roll band, hired a rusty transit and went off on tour (we had no talent for this and it passed by the time we’d got home). This has the same feel. “Blessed Be The Damned”? Hell, yes. The Devil always has more fun, you see, and damn me, this is good.