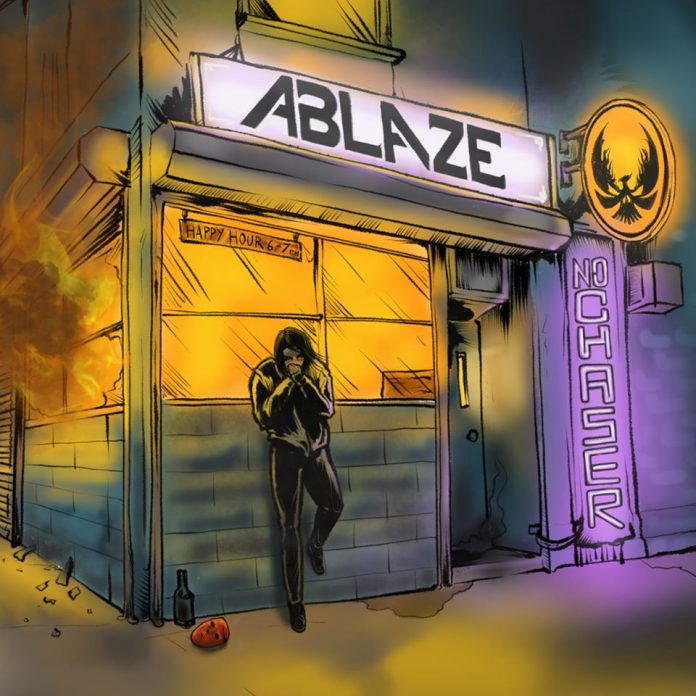 Sometimes what you see, ain’t what you get.

Ablaze, when it came, said something about “Aussie Rockers” and I scanned the song titles which were things like “Dirty Little Secret”, “Where’s My Drink?” and “Bar Fight Blues” and you think – because you can’t help it – “oh good, I’ll just pack the review with references to AC/DC, Airbourne and whoever.”

Then you put it on. And of course there’s an element of Angus and his troops in this (but as I always say, if you are in a hard rock band and don’t sound a bit like AC/DC or Thin Lizzy, then go away until you get it right) but it has so much more going on – and as for the other band I mentioned, then “No Chaser” is way, way better than the recent one from Joel and the chaps.

“Back For More” starts with something a little epic, but, quite frankly it’s as though they got bored of that within about 30 seconds Ben Anderson is riffing away – and I’ve never seen the band live, but I’ll wager that his hair is going all over the place – and 20 seconds after that, Danny Slaviero is singing that “we’ve got to find us that rock n roll show” and that, basically is that.

Except it isn’t. Because this is actually more nuanced than a full-on bar room attack. For all that they say on their Facebook page: “Like all good ideas, Ablaze started in the pub” this is more groovy, bluesy, if you like. If you are looking for a reference from the modern crop, then think Inglorious. Because even “Dirty Little Secret” sounds more measured than outright horny. Taking aim at the fakers more than getting laid: “Cristale and caviar to please the social scene, jack and coke when no one else can see….” Sings Slaviero here, and it sounds like he has a target in mind.

“Kings And Queens” is built around a filthy bass groove from Dave Knight, but “Just A Taste” really lets its hair down. Cowbell, crunch, chorus. Any other word beginning with “c” you want to shout out, and yet more fuel to my belief that Ablaze will be even better live.

“(We’re Gonna) Rock N Roll” walks the earth like the biggest, most confident beasts you can think of. The groove here is so big you could hang your coat on it, and fists, I swear to you, would be up in the air for “Bad Tattoo” anywhere people have arms.

But there’s a reason this is better than much of its competition. And that’s because like their fellow Aussies Palace Of The King, Ablaze do it their own way. Right in the middle of this there is a ballad.  “The Darkest Day (What I’ve Become)” and it is a glorious epic. Utterly fabulous. Seven and a half minutes of slow building stuff that most bands of this type wouldn’t even dream of, let alone have the skill to pull off.

However, for all that, this is a good time boogie, and “Two’s Up” is designed for the boozy nights, but here’s the thing. “Where’s My Drink?” remember the one I thought I’d got pegged? Well that’s kinda folky. Not far from The Levellers rabble rousers and “Bottom Of My Bottle” full of acoustic regret, but it isn’t going to stop any time soon.

The last one (last orders?) here is exactly what I imagined the whole record would sound like. A denim clad, boozy scrap, and what else do you want a song called “Bar Fight Blues” to be?

When the hangover clears, it is just clear that Ablaze are a classic rock band with a modern twist, and “No Chaser” is straight up brilliant.