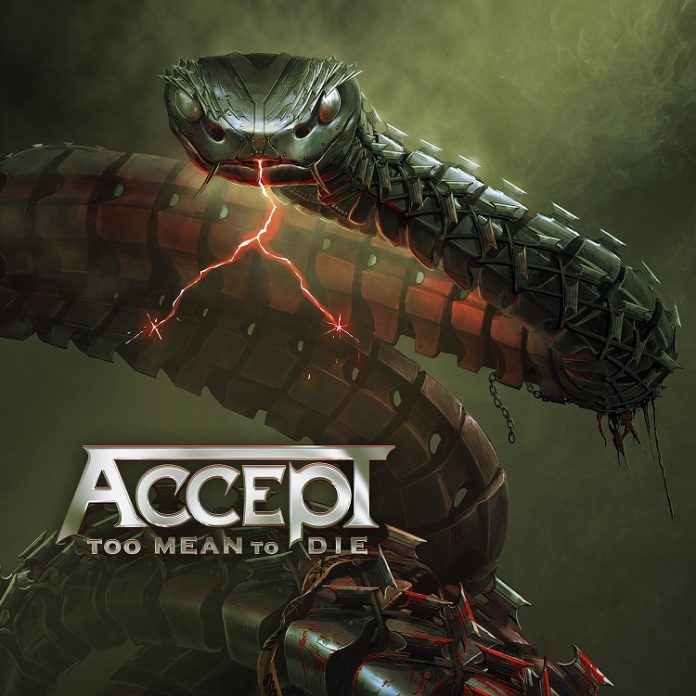 There’s a song on “Too Mean To Die” called “Overnight Sensation”. It is instantly recognisable as one of Accept’s. “Proper” metal. That is to say, its leather clad, studded and proudly with its fists in the air, but it’s not just that.

Rather, it’s the disdain for the modern “celebrity” culture that really hits home. There’s such a sneer in the voice of Mark Tornillo as he sings “I wanna be famous for nothing, just like the Kardashians, I wanna tell the world my life story, even though I don’t have one.”

Now, not only is this bang right – the only thing I hate more than Facebook is Instagram, enough said? – but it represents a bit of a shift in the four years since their last studio album for the band.

On “The Rise Of Chaos” they almost foretold the nihilism that was to befall us, on “….Die” you can frame it as the beginning of the fightback, if you will.

“Zombie Apocalypse” talks about the evils of technology, but you know what? As much as I love to analyse everything, sometimes you have to just speak the truth. This is a brilliant heavy metal record. Truly superb. It is nothing more and nothing less.

See, Accept have always that sound nailed. Yes, they’ve got one of the finest guitarists in the world, Wolf Hoffmann excels here too, but they manage to sound both classic and relevant all at once. Listen to the title track. It sounds like the 80s has been kicked into the 2020s.

This thunders. “No Ones Master” has a Maiden-like energy and galloping sound, “The Undertaker” has a thumping bassline from Martin Motnik –one of two newcomers here along with Philip Shouse – and a kind of latter day Megadeth vibe, but more broadly it sounds grandiose, but is never overlong. The same can be said of many of these.

“Sucks To Be You” has a real sense of fun, as does “Symphony Of Pain”, in which Wolf dusts off his inner virtuoso, for something that is more like his solo work, while one of the slowest, “The Best Is Yet To Come” switches gear for a real hymn of hope. If you are looking for the light at the end of the tunnel, then I’d venture that you might find it here.

Christopher Williams’ drumming anchors down “How Do We Sleep”, which finds the time to do some power metal type things and Tornillo stretches his pipes to sound even more like Biff Byford than normal.

This, though, is very much a riff album. Listen to the slashing on “Not My Problem” and tell me how many bands that have been around for over 40 years still sound this exciting and excited to be here.

“Samson And Delilah” is slower, heavier, a little more overblown, and, as it is an instrumental, it adds a real menace and is clearly very much a “Hoffman” track.

The rest of the album isn’t. Not really, it is the work of a fantastic heavy metal band. And one that proves why the sound itself will never, ever die.