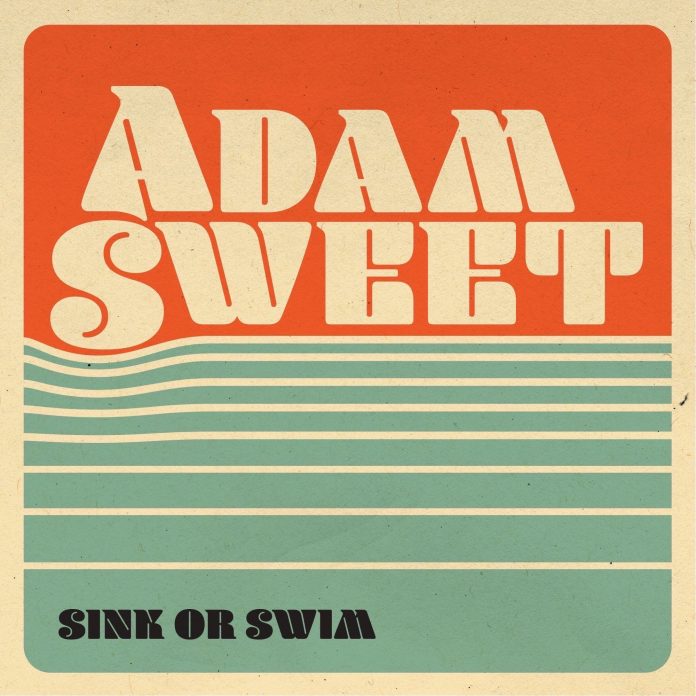 Adam Sweet is a blues rock guitarist and singer-songwriter, he released his debut album “Small Town Thinking” at the start of 2014 and it marked the beginning of his long-standing co-writing partnership with songwriter Steve Black. His new album “Sink or Swim” marks Adam’s evolution into a fully-fledged blues rock artist and relates tales of loss, longing, hope and strength in the face of the adversity we all face in these most uncertain and fragile times. Adam has gathered together a real powerhouse of musicians to bring this vision to life with Ian Jennings (bass), Josiah J Manning (Keys). Garry Kroll (drums & percussion), Ian Briggs (harmonica) and Alex Hart & Joanna Cooke (backing vocals).

`Working On It` opens the album and it`s a song that echoes back to songs like JJ Cale`s “Cocaine.”, quite laid back, bluesy and has superb resonator or resophonic guitar chords running throughout it. The backing harmonies seemed to arrive at just the right time, a cracker of an opener. Another bluesy number follows with `You Or Me`, which has a driving drum beat and some really subtle harmonica flavourings. Love is in the air but who`ll make the first move?

`Like It Or Not` is a heartfelt soulful ballad about a relationship that could go either way, which really allows Adam`s voice to shine. The song is really enhanced with some organ and piano shades and a short guitar break just over midway through. `Something From Nothing` begins with quite a shuffling beat with a quietly shared wah-wah type guitar sound and some sweet organ tinges but midway through we have a delicately implemented guitar break that highlights the dexterity and ability that Adam possesses. It`s executed to fit right in rather than overshadow the number.

There`s a more laid-back bluesy ballad flavour about `Good Enough` a tale possibly of a couple whose relationship is trying to withstand the attention of living in a small town and what that derives. I could see `Miss You So` going down a storm in a live setting. It seemingly narrates the aftermath and reflection on a romance gone sour and quite possibly the realisation that this could have been avoided. There`s some graceful guitar shredding, some charming harmonies, and a feeling of anguish in Adam`s vocal delivery.

We have a Southern rock style instrumental `Devil`s Lake` before another tale of a romantic alliance which seems a little strange almost antagonistic with `Not A Moment Too Soon. `

Another slow burn comes with `Fall from Grace` a story of a buddy getting involved to salvage a friend`s marriage and it`s inherent pitfalls. The lyric of “What do you do when a friend’s in danger, close to sinking without a trace, you better listen to your saviour, before you fall from Grace” really sums up this situation. There was a similar musical feel to `Trouble` where the storyteller advises the smart thing to do in most situations is to keep your own counsel to avoid the inevitable trouble.

I felt `Here To Nowhere` was a little different, more of a rock number. An old acquaintance stops by and then heads off leaving you with a feeling of unease. There`s some enjoyable harmonies and a cracking bit of guitar shredding towards the latter part of the number. The album closes with a chronicle of almost not worrying but just living for the moment as the song says `Something`ll Happen. ` An easy-going piece to end on.

Adam Sweet is an undiscovered gem and “Sink or Swim” is a real showcase for his talents lyrically, musically, vocally and his ability to surround himself with talented musicians to bring this gift to fruition. We are fortunate to have an abundance of British Blues talent with Laurence Jones, Ben Poole, Kris Barras, Ali Clinton, The Bonnevilles, Willie and The Bandits, Tax The Heat, King King and Danny Bryant to name a few. We now have another to add to this growing list.