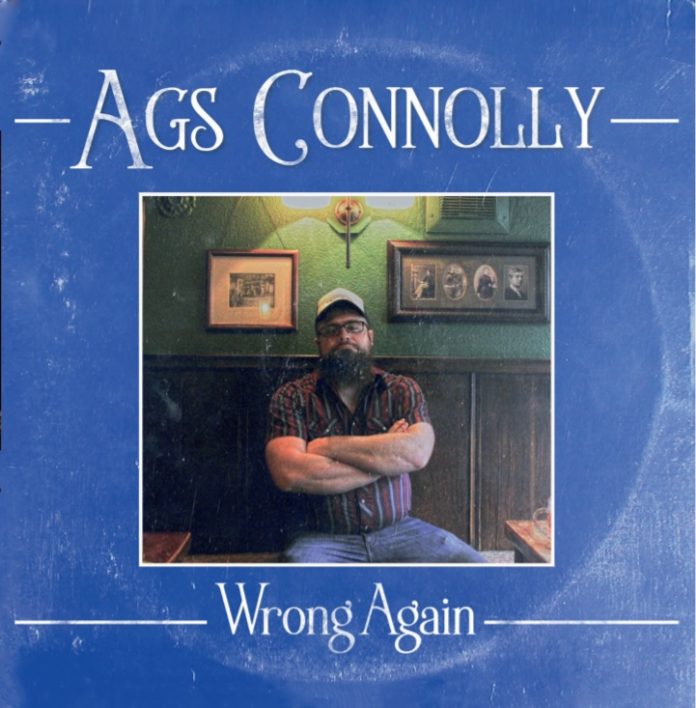 I must admit I knew next to nothing about Ags Connolly and having had a brief listen to “Wrong Again” checked out his social media to find out which American State he came from, only to discover that this traditional country singer-songwriter hails from leafy Oxfordshire.

So, the idiom of don`t judge a book by the cover really rang true here.

“Wrong Again” is Ags third album, a record that is dedicated to his Dad, Sean and follows his well-received debut “How About Now” and it`s follow up `Nothin` Unexpected”

`I`ll Say When` opens up the album and it`s a wonderful slice of Tex-Mex. The accordion of Michael Guerra (The Mavericks) is sublime. The guitar inflections and accordion playing off each other mid-way through the song with Ags rich gentle vocals are a joy to behold.

I loved `The Meaning Of The Word` it reminded me of childhood holidays travelling through Ireland in a Morris Minor Traveller and these great American country songs coming out of the radio. A tender song of romantic heartache which is heightened with Eamon McLoughlin`s Fiddle (Emmylou Harris, Rodney Crowell) and Joe Harvey-Whyte`s beautiful pedal steel guitar. `Lonely Nights In Austin` is a really reflective track about a time in the narrator`s life before they found their special someone. The feeling of the subjects` prior isolation is almost palpable. Again, the accordion inflections are simple but so effective.

A real foot tapper follows with `Wrong Again (You lose a Life) ` and it`s a real band effort with the electric guitar of Rob Updegraff, Robert Pokorny`s drumming and the bass of Anna Robinson adding so much depth to this offering. Anna also adds some backing vocals throughout which blends really nicely. More heartbreak follows with `Say It Out Loud` and the emotion seems so real in Ags vocal delivery, it`s a song that would sit proudly in a Charlie Rich collection. There are also some delicate electric guitar and accordion tinges halfway through the song. `What Were You Gonna Do About It` and `Indian Sign` are sort of bar room ballads. They are both insightful musings on what could have been set to really appealing tunes performed by stunning musicians. I was quite hypnotised by both.

If there was ever a song that Ags should cover its Canadian Gordon Lightfoot`s `Early Morning Rain` and my god what a cover. The sense of homesickness is tangible, and I was left with a lump in my throat after listening to this. Bob Dylan and Elvis Presley have both covered this classic and this version is equal if not better than those.

`Then And Now` is a stripped-down ballad with just Ags`s warm vocals and a strummed acoustic guitar reminiscing about of a romance from the distant past, another track that the singer’s delivery evokes a feeling of almost being there. The album closes out with the uplifting honky tonk `Sad Songs Forever` an irony if ever there was one. A cut that will certainly have the fans that want to jive, up and dancing along.

I have to say I thoroughly enjoyed this album, the songs are well written, fleshed out by some gifted musicians and delivered by a fella with a wonderfully rich and tender vocal range. Ags`s music has been classified in the genre of Ameripolitan, contemporary original music encompassing four prominent subcategories: Western swing, honky-tonk, rockabilly and outlaw. However, they try to pigeonhole him, if there was any justice in this world, this guy would be destined for stardom.