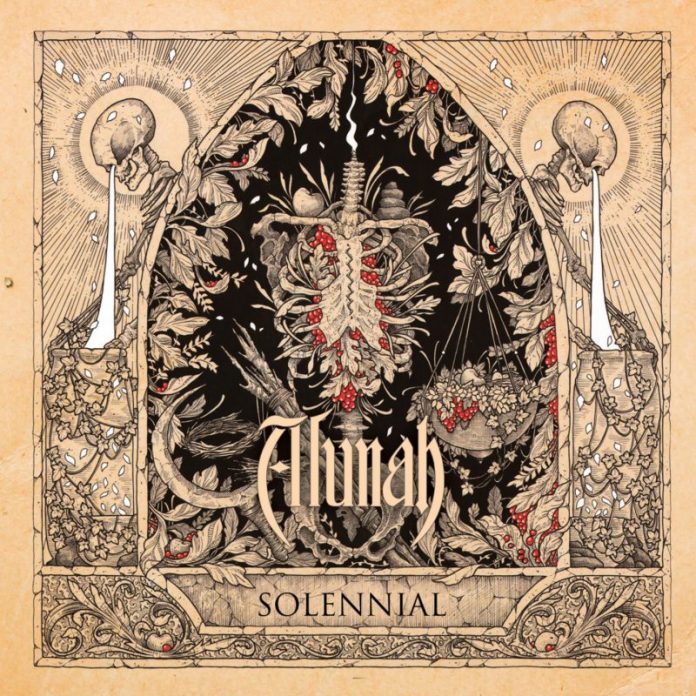 There is a lot to admire about Alunah. Very quietly and with very little fanfare they have calmly made three records that have got better with each time. The last one “Awakening The Forest”, emerged in 2014, and confirmed the idea that whilst it can’t be easy being a doom band from the home of Black Sabbath, if you’ve got the talent and the songs then such expectations matter for nothing at all.

Three years on, comes “Solennial” – their first for new label Svart – and there is a real feeling that this was one that Alunah really wanted to come out well.

The good news for them – and their fans – is that has arguably come out better than even they might have hoped. Recording, as so many brilliant records seem to be these days at Skyhammer Studios with Chris Fielding of Conan undoubtedly helped, because even before anything else, “Solennial” is sonically incredible.

Doom with a mystical intent (to be perfectly honest MV doesn’t profess to have the first clue what the lyrics are about) things kick off with the understated “The Dying Soil”, which builds up methodically as singer Soph Day blends wonderfully with husband Dave’s guitar, but it is with the dark riffery of “Light Of Winter” that things really dig in and you first realise that this is a little special. It’s occult imagery and more monolithic guitar is extremely well done.

However it – like everything else here – has to give way to the many headed beast that is “Feast Of Torches”. A stunning song and one with a chorus to die for (literally given it looks to find the beauty in death) and full of tone and colour, it wouldn’t be too much of a stretch to suggest that Alunah’s previous 12 years had been leading up to this moment.

Not that the rest is found wanting either. “The Reckoning Of Time” has an epic feel and huge intent, “The Fire Of Thornborough Henge” (the one they chose to be a video) is like being transported back to the early 1970s – and you suspect no one here is too disappointed at that thought.

“Petrichor” stalks like some strange beast, while “Lugh’s Assembly” comes with magnificent guitar work and some clever spoken word stuff at the end.

The album ends with a sort of left turn. The only cover in the collection. The Cure’s “The Forest” which, in combination with some fine cello, takes the song into new realms and makes it their own.

As has almost has become their trademark, Alunah have done this in their own calm and understated way, and have proved yet again that they might just be the best doom band we have on these shores right now.