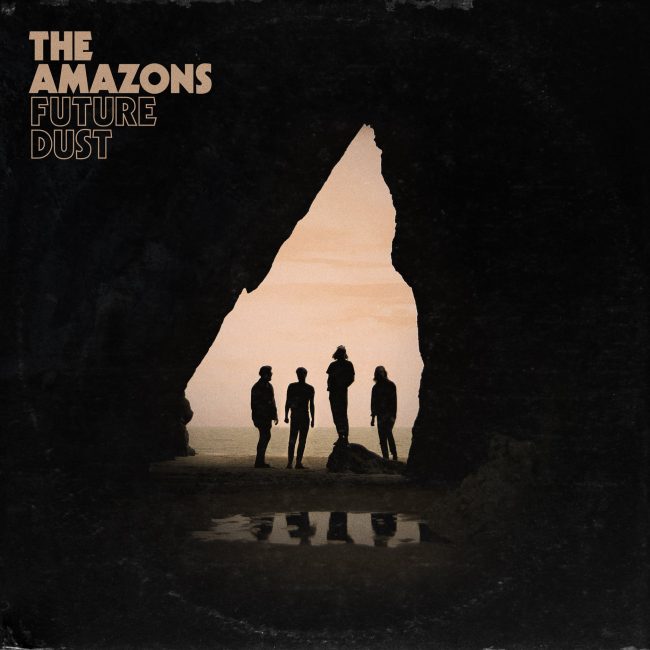 There was a piece on the BBC News website no less this weekend where it said that The Amazons were effectively the standard bearers for rock n roll in this country.

Whether that’s true or not I’ll leave to the people who like to claim they are “influencers” or “tastemakers” or other such made up words to give themselves self-importance to decide.

There are, however, two things that are absolutely clear when you listen to The Amazons in general  and more specifically “Future Dust” in particular.

First, they do. Not. Give. A. Shit. Not one bit. The NME can slag them off (they have) but they’ll get past it. In That Newsbeat article frontman Matthew Thomson is quoted as saying: “Who cares or remembers who was number one in the pop chart last year? No offence, but who actually cares?” Of course, its easy to be minded that way when you are genuinely on the verge of a breakthrough, when you can’t move for billboards advertising your album and when you are playing Radio 1’s Big Weekend, but that neglects the second point:

“Future Dust” is so good that Thompson and the rest of the band can let the music speak for itself, all they need to do is ride the considerable wave.

It’s evident that world domination, never mind the UK, is on the minds of the band and producer Catherine Marks (who has worked with Kayne West) from the get go. There is an eye on arenas in the rumble, the shake, the confidence of “Mother”. It builds itself up into a fuzzy kind of frenzy, and the guitar of Thomson and his partner in crime Chris Alderton is huge.

But, and here’s where they add their own stamp on things. There is an urgency too. As if they know that this is their time and you’d best believe they aren’t going to waste it. Before you’ve even had chance to breathe almost, “Mother” is over and “Fuzzy Tree” is on you, incessant, throbbing, there is a suggestion of QOTSA here, but this is out of the blocks much quicker.

On “25” the vibe is much the same. “Not yet 25, too loud to be ignored” sings Thomson, and this is the anthem. The one the kids that also have a “song they’ve been singing” will take as their own, but the angular guitar lines belong to no one else.

“Doubt It” – and there is no doubt here, there really isn’t – is the massive hit. From the huge harmonies, to the middle bit that is absolutely primed for Goal Of The Month come August and Match Of The Day, and has a dark blues touch about the lead too.

And it is these different shades that suggest that The Amazons are ready for the long haul. The multi-layered near-balladry of “All Over Town” recalls Biffy, but then if you’re going to build a career as arena rockers, then I’d wager there are worse bands to recall?

Add to that there is still a youthful exuberance here – look at “End Of Wonder” for proof – and a feel that whatever they want, they’ll get. Or Take, and you’ve got something special. They even manage to get some cowbell in “Dark Visions” and there is nothing more rock n roll than that, right? The hookline: “the beasts they come in the dead of night, feed my fears, bring them back to life” is delivered with an odd positivity.

Not a long record, by any stretch, “Future Dust” ends with its two longest and most epic sounding things. “Warning Sign” does that loud/quiet thing that peak Feeder used to, while “Georgia” adds a real pop dynamic. More laid back and a touch more reflective than some of the others, its haunting harmonies and lead that comes out of nowhere, is another to file in the draw marked “classy.”

A few months ago, The Amazons were touring where I live and playing what amounts to the upstairs of a pub. Now they are playing the venues one down from arenas this autumn. Next year, you know where they are going to be – so do they. The last band to do anything remotely similar was Royal Blood. The Amazons are going to be the same mainstream heroes. The future, whether dusty or otherwise, is theirs.