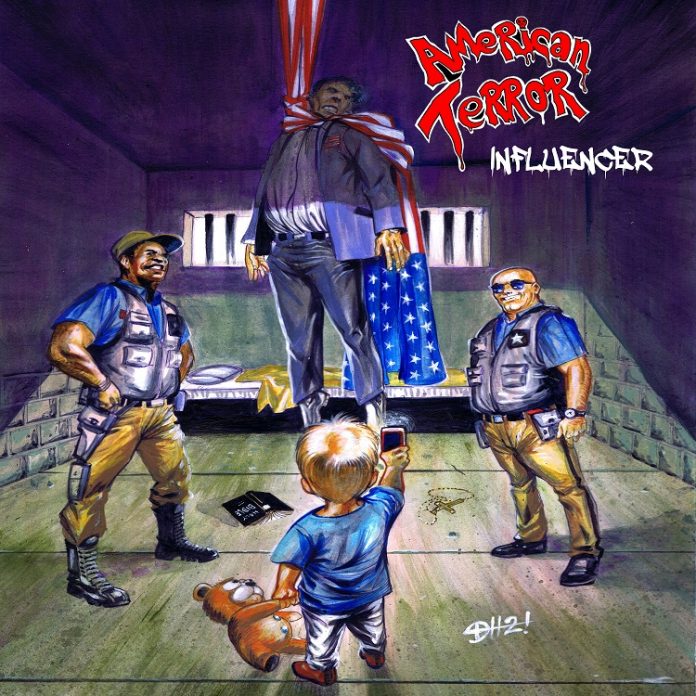 We live in a world where the words “Be More Kind” are reduced to a Hashtag on Twitter every time some celebrity or other commits suicide. Often, it seems to me, the very people who are tweeting it, are the same ones who are buying the publications that hound them.

As Billy Bragg put it on his “Never Buy The Sun” single from a few years back: “you who love the kiss and tell, you should share some blame as well”.

American Terror are slightly more explicit about it (in every sense of the word, in fairness) at the start of the last track here: “PC Me” singer Brad Cox yells this:

“I’m tired of all the politically correct bullshit out there. Everything I say seems to hurt everybody’s feelings. Take a fucking joke and grow a pair, you fucking cissy”.

Later in the song he screams: “if words hurt, you’re a fucking pussy”.

The point of all this, is simple. You have been warned, and if you are offended, I imagine that American Terror couldn’t give two shits, to be honest.

What they do is equally strange as that combination. They are hardcore on occasion, they are pop punk at others, they do a passable Korn at times. Sometimes they do all three.

But all of this sounds like a manifesto for lord knows what. “Judgement” is as furious and sweary as metal has been for years. After asking “what makes you better than Jesus Christ?” Cox is tossing the C word out liberally, and offering you the opportunity to pleasure him orally, as it were.

As slogans go, it’s a little on the nose, perhaps, but it does rather explain the vibe here.

“Denial” is a muscular thing – think Stone Sour, I suppose – which deals with addiction with all the sympathy you’d imagine. “How Do You Like Me Now” imagines a world where Nu-Metal was still a thing, and the crunchy “Retribution” takes the law into its own hands.

The thing is, though that all this is damn catchy and extremely well put together. It sounds like a million dollars, it really does, and the more light-hearted ones, such as The Beastie boys playing punk flavour of “People” and The Offspring like “She’s A Bitch” (sample line: “she’s a bitch, but I couldn’t live without her”) are superbly tongue in cheek.

They do, however, provide only brief moments of “fun”. “Threat” is almost thrash, almost Hatebreed stuff and it resorts to a bit of a cliché “put a middle finger up in the air in the face of authority”, but the anger here is at least laser guided.

Best of all, perhaps, is “Prophet For Profit” which takes organised religion to task with some real brooding malevolence, “Break Free” is part industrial, part rap metal, but the chorus, man, its huge. Radio friendly, even.

Which brings us back to where we started, which might be the most offensive track of 2020 to some (but you have to admire any song that is happy to go with: “not all Jews are good with money, not the retarded ones” in the current climate).

And look, this won’t be for everyone. This will upset some, this will anger others. It’s meant to. I get it, even if I don’t agree with some of it. I hate the word “Influencer” for a start. The idea that some prick with Instagram imagines they can tell me what to think has never sat well with me.

In truth there is a bit of “what are you rebelling against? What have you got?” about this particular “Influencer”, but it is a brave and often entertaining statement of intent all the same.