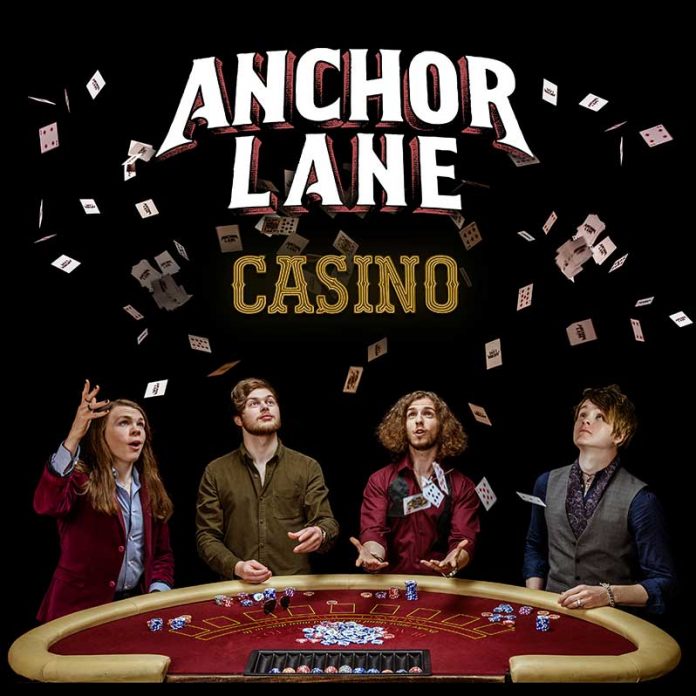 If you ever do a pub quiz with me, the chances are that I might not be the best at the picture round.

Celebrity Culture, you see, is one of the many things that I don’t get about the modern world.

We were having a pleasant family day. Late into the afternoon, me and my brother might have had a nap. Upon waking up we went into the front room to join the rest of the extended clan.

They were watching The Chase on TV. Now, I barely watch tele – being a rock god makes demands on my time, and stuff (ahem!) – and a) I’d never seen the thing before but b) crucially, I hadn’t a clue who any of the “celebrities” on it were.

Which is why, when you are writing a song called “Fame Shame” about the obsession for superficial stars in 2020, you are very much kicking against an open door where I am concerned. Which is half the reason why I like the song so much.

The other half – for the complete picture is because Anchor Lane are brilliant.

The Scottish quartet are clearly a band with talent. The singles from this record proved that. There is, though, always the question of whether you can do it over a full collection. The answer here is a resounding yes. Goodness me, yes.

“Casino” is produced by Toby Jepson – once the kid roughly our age who sang in the Little Angels, now the superb singer in Wayward Sons – and there’s a moment in “…Shame” where Conor Gaffney sings – no, make that spits – the words “we’re just stupid bored” and it recalls The Virginmarys, who Jepson has also worked with.

The reason that matters is simple. Virginmarys aren’t a “classic rock” band and neither are Anchor Lane. Instead, this is a very modern, outward looking 10 songs.

That’s clear from the get go of “Blood And Irony” which owes more to Royal Blood than it does to Whitesnake. That one is one of two written with Ricky Warwick (and if I haven’t got a clue about modern celebrities, I’d go on Mastermind on the life and times of the former Almighty man, but I digress….). The other one co-penned with Warwick is the fabulous current single “Dead Run”, about the effects of addiction, it thumps along on the back of a gloriously massive bass groove.

Elsewhere, there’s barely a missed note on this. From “Voodoo” which recalls the early work of Temperance Movement, to the thunderous riff of the title track which gives way to something a little funky, and “Clocks” which hints at something a little darker and bleaker lurking below the surface, this is a band that seems to have arrived already.

There’s a line on that one that seems to sum things up, actually. “Embrace what you can’t change” roars Gaffney, but simultaneously he doesn’t sound like he’s in the mood to settle for anything. Rather it appears that if you put a wall there, Anchor Lane are going to kick it down.

They even do balladry in a different way to their peers. “Stone Cold Hearted” is sort of blues infused, except it is the blues if it was played by QOTSA. Likewise, “Shell Of Me” shows off another side of them, and if precisely nothing here sounds “stripped back” then this one at least has a gentler side and if there’s been a thought throughout that was going “Pearl Jam” then it is right to the fore here.

“Flatline” sounds youthful and exuberant – its “na, na, na, na,” hook is going to be played live for years, we all know it – and drummer Scott Hanlon beats his kit as if it has snitched on him to the police, but the closing “Honey” is the underlining of what is clear.

This is not the sound of a band with potential to be great. This is a great band. In football terms this is Wayne Rooney. Anchor Lane aren’t coming out of the reserves at 16 and finding their feet. They are mixing it in the big leagues already. Consider this the 25 yard piledriver into the top corner with which they announce themselves.