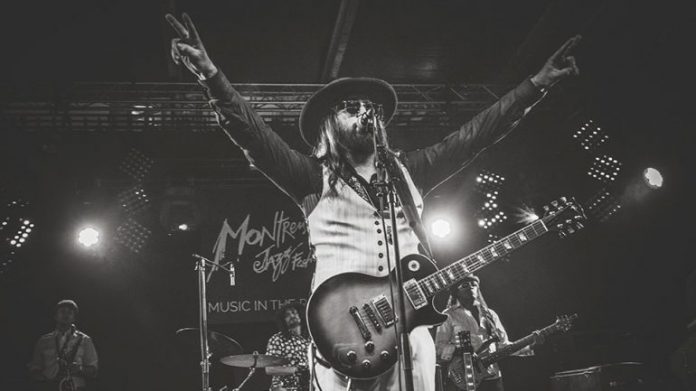 The title of this album: “Live at Music in the Park – Montreux Jazz Festival”. All I can think is “we all went down to Montreux, by the Lake Geneva shoreline”, and I’m not even sorry.

I even hope Arkansas Dave made the album with a mobile.

Actually, I hope a lot of things for the man his mum knows as Dave Pennington, because Arkansas Dave is magnificent.

I have written before that I came across him while searching like a music nerd for gigs. Saw a name of a man who was enigmatic, went down to find Arkansas Dave and his mate Drew DeFrance playing some mighty acoustic tunes.

Those tunes became a brilliant record. That two piece was a band the next time I saw them, and this is the case here too.

That night when I saw them, I wrote this: “[Dave said]: “I’ve come from Camden, Arkansas, to Camden, England, it’s amazing that music can take me this far.”

It isn’t, really. Not with songs this good and a band this talented. Arkansas Dave is doing it his own way and the hard work and the sweat – not just here but generally – is paying off.”

And that applies here too, with this hour long slot at a jazz festival. I admit when I saw “jazz festival” I did think “blimey, how’s he gonna pull this off”. But Dave is nothing if not versatile (and he’s got a brilliant band) so what they did was add a couple of horns, and play the songs closer to the versions on the album.

Which means that “Bad At Being Good” distils rock n roll into a bitesize chunk, but with the addition of the Down River Horns, it now takes on a kind of Asbury Dukes quality, and “Think Too Much” is the best thing Dan Baird never wrote – but then you know all that, or if you don’t you should.

What you might not know is that “Bad Water”, when its played live is phenomenal bluesy fun, and “Chocolate Jesus” is still brilliantly bizarre, but remembers this is a jazz crowd and gets as sweaty, Cajun and as New Orleans as you like.

“Squeaky Clean” has always sounded to me righteously filthy – and here it needs a wash when it’s done (or a trip to the clinic, whatever suits), but this is gloriously paced. So “The Wheel” does a Led Zep thing, and “Rest Of My Days” sounds about as content as can be. It does not need a heart rate monitor, that’s for damn sure.

Amongst the other highlights is the sleazy fun of “Meet Me With Your Black Draws On” (and lets be honest, everyone knows that AD would rather they weren’t on as it would save time) while “On My Way” is as classic as it gets.

That one also doubles as the band introductions and after acquainting the audience with the boys, one of them does it for Dave (I think it’s Producer Jamie Evans?) and he yells “he’s the next in line to the Arkansas greats” and reels off a load of legends like Johnny Cash and Howlin’ Wolf.

The truth is Arkansas Dave has elements of those – and more – but he’s very much his own man. He’s also brilliant. And adaptable (brilliant songs can always blend in anywhere), hell, he could probably do a mean “Smoke On The Water” if you asked him.