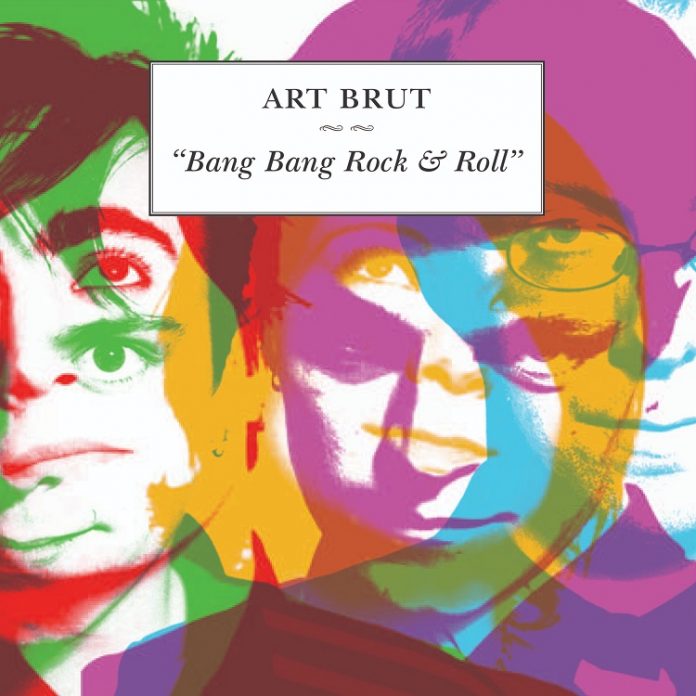 “Yes, this is my singing voice. it’s not irony. It’s not rock n roll. We’re just talking. To the kids”

Those words, from Eddie Argos, come at the end of the first verse of “Formed A Band” – the first track on this, the debut album from Art Brut, but even now, 12 years after I first heard the record, they are why I listened to “Bang Bang Rock N Roll” in the first place.

Ok, I am aware that it came out in 2005, and whilst my maths are never going to get me on countdown, I do get that it wasn’t 12 years ago.

But it was back in the summer of 2008, when I’d just got into The Hold Steady, that I began searching for similarly off-kilter rock n roll, that I kept reading things about Art Brut.

Named after a modern art movement, living in Germany, but speaking like an upper class Englishmen, they wrote songs that weren’t like anyone else, they delivered them unlike anyone else, but they were utterly fabulous.

Listen to something like “My Little Brother” with its Jam (ish) opening, its punky, angular guitar line, and it still suckers you in, but it’s the lyrics. Always the lyrics.

I have always been obsessed with words, and the use of language on these songs is truly incredible. The character on “…Brother” who makes the tape of “bootlegs and b-sides”, or “Emily Kane”, which is right up there with the best songs about not getting over an old flame. Try this. “Every girl that I’ve seen since, looks just like you when I squint”, and the way Argos writes must, surely, have been an influence on a chap called Frank Turner who still was in a punk band called Million Dead” at that point (wonder what happened to him?)

Everywhere you look, you’ll spot some glorious vignette. “Rusted Guns Of Milan”, for example is an ode to not being able to …..urmmmm…..perform, as it were, which is possibly the least rock n roll song of all time. After all Rolling Stones never had a song called “I can’t get no satisfaction even though I’d really want to” or Guns N Roses never had one called “Anything Goes if only I could get it up”, but that’s why Art Brut were so superb.

They were sending up the whole rock n roll “thing” and in doing so, spoke to us, the outsiders, the geeks.

“Modern Art” as you’d expect given their name, is utterly gleeful punk rock, but it was always “Good Weekend” that was my favourite then, and it still is now. It’s the way Argos yells: “I’ve seen her naked, twice” at the end, as if he can’t believe it either.

The title track is one for the ones who want to be rock n roll but were never quite sure – and as someone who “can’t stand the sound of the Velvet Underground” either, preach on brother. “Fight” is an anthem for those who think they have be “manly” but it doesn’t suit them, and the gentle, summer filled “Moving To LA”, gets bonus points for mentioning Axl Rose and musing “I might even get a tattoo” as if on the spur of the moment – and it is a mark of this record that it sounds so spontaneous.

“Stand Down” is slower, a little more reflective, but still done well, “18,000 Lira” is back to the trashy, thrashy stuff, and concludes “It seems like a lot of money….”

That would have been the end of the album, except here “A Subliminal Desire For Adventure” does that job. It was on the original album too. But Christ it was well hidden. You had to wind back from the opening song on the CD if I remember right? But it is a fuzzy little instrumental in the vein of Royal Blood these days.

So has “Bang Bang Rock N Roll” stood the test of time? Goodness me, yes. In fact, I’d argue it sounds better now than then, if you will.

And why? Well the answer is in the song “Bad Weekend”. “I haven’t read the NME in so long” muses Argos, “I don’t know to what genre we belong”, before he concludes: “Popular culture, no longer applies to me.”

And that, right there, is why a band like Art Brut, who never gave a monkeys anyway, still sound so damn good – and can still get people talking along.