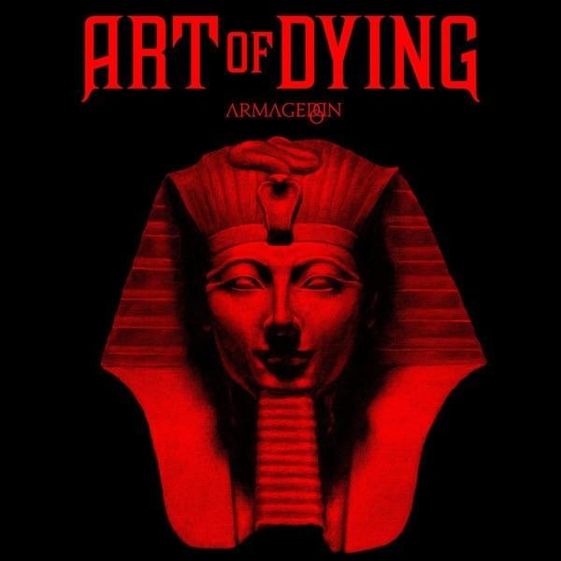 I remember going to watch the wonderful singer/songwriter Stephen Fearing a couple of years ago and he talked about winning a Canadian Juno award and how he was backstage at the award ceremony.

There was a “wooo” from the crowd, as if it was fancy.

“Don’t bother with that,” smiled Fearing, “it ain’t the Grammys, it was in an ice hockey rink…..”

I’ve always liked the low key nature of Canada, but sometimes it counts against them. Take Art Of Dying. They’ve been knocking around since 2006, and they’ve gone under the radar somewhat.

I’d venture to suggest that there are many, many inferior bands from just a little further south that have been a lot more high profile (goodness knows, AOD have toured with enough of them over the years).

Whether “Armageddon” changes that materially, who knows? I am certain it deserves to, though.

If you haven’t come across Jonny Hetherington and his troops in the last 13 years, then it might be instructive to have a look at the list of bands they’ve appeared with. Not because they sound exactly like any of them, but there are flavours, colours of them here.

Not only are they signed to the label which David Drainman and Dan Donegan of Disturbed set up, they’ve played with Seether, Three Days Grace (bassist Cale Gontier is the cousin of their former singer), Stone Sour, AX7 and others. That might tell even the most casual of observer that this is going to be big, thick, arena ready rock, with soaring choruses and lyrics that deal in pain and convey real emotion.

And that, basically is what Art of Dying do. Now, you could be forgiven for having a jaded look on your face and going: “yeah, but so what? So do loads of others.” Fair enough, but here’s the thing. AOD do it brilliantly.

I had them on the website as Band Of The Day back in September, essentially because the lead single (the title track too) suckered me in. Slow building, brooding, it seemed to me, to be a cut above the usual, and the melody was original. The song is typical of the stuff here, and as Hetherington put it: ““Life sucks. Life is beautiful. Writing Armageddon got me through a tough time and helped shake a few of the demons off my back. If you feel like your world is caving in, like you’re trapped in your own personal Armageddon, I hope you will find the strength to get out.”

Those words not only exemplify how overbearing the emotion is on the record, but also just how important it is to them, likewise, there is something of a Korn riff to “Cut It All Away”, a desire to do things in their own way – but you best believe that when the hook hits it’s not shying away from the moshpit.

“Do Or Die” is for my money anyway, the best thing here. “Tick tock, time is a hunter” sings the frontman here, and unlike Shinedown, say, who always seem to have done their lyrics in a focus group (and AOD have toured with them too) it seems that the line “look at the tiger in these eyes” is said with a real, palpable stoicism.

“Dark Days” starts, rather incongruously perhaps, with a whistle, so that the words “I don’t know if I’ll be here tomorrow,” really jar. “Rear-view Mirror” doesn’t even bother to hide to its debt to AIC in parts, “Never Easy” adds an acoustic opening to the crushing riffery and the electro, almost dance if you will, pulse that has been present throughout the record is to the fore on “Shatterproof”. You’d call this “nu-metal” if anyone knew what that meant.

“Unoriginal” is an interesting one, because it is exactly because this is an original take on a familiar formula that I am reviewing “Armageddon” and when it feels like doing heavy, letting its hair down rock n roll, it can do that too. I don’t know if there ever was a jam between Nickelback (as ever mention of them on this site is a positive thing) and STP, but if there ever was, it would sound like this.

The last one, a piano led ballad called “No One Ever Wins” is a wonderful piece of songwriting first and foremost. Dealing with grief, it is horrible and raw, but it is a work of real skill.

It finishes an album that deserves to see Art Of Dying above the radar a little more. Whether that happens or not only time will tell. For now though, To paraphrase something that was written 32 years ago, for which I apologise, because AOD deserve better: you’d better come inside when you’re ready to, because they got it. And now, “Armageddon” it too.