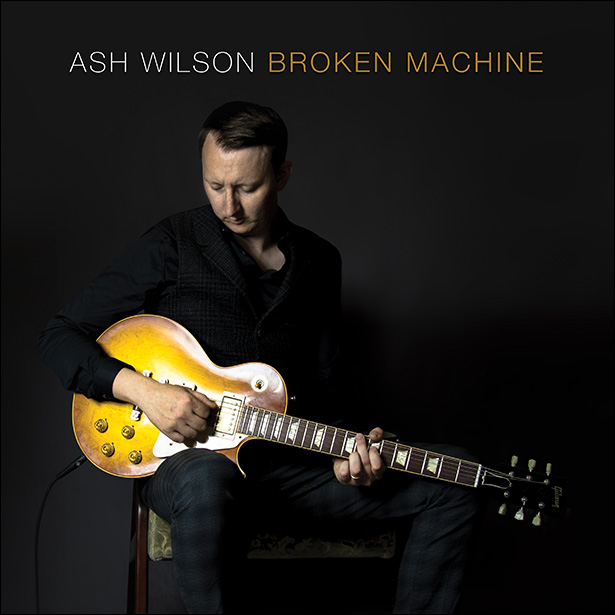 Although this is his debut solo record, Ash Wilson is no wide-eyed newcomer on the scene. Forming his own band in his teens, he then joined his brother Phil (who plays drums here) in Djune and perform with a host of indie rockers.

After spells in an alt-rock outfit, Infamous Vampires, and as a member of Sean Webster’s band he decided the time was right for his own vision to see the light of day.

First off there is an impressive cast for this. Roger Inniss (ex-Laurence Jones), Bob Fridzema (King King) are all joined by special guest guitarist Jesse Davey (The Hoax – who plays a wonderful solo on one of the album’s more laid back moments, “The Hitcher.”).

Wilson is set to mark the release of “Broken Machine” with some shows with South African Dan Patlansky. This is apt, as to all intents and purposes Wilson is a kind of British version.

Like Patlansky, the songs here are rooted in the blues rather than being beholden to them, and also like him, Wilson finds an interesting contemporary perspective on it all.

“….Machine” begins in pretty conventional fashion. There is a Hendrix type feel to the opening riff of “Show Me How To Love You”. Which, when it kicks in, is a mighty thing.

But he’s soon both playing with and blurring the format. There is a touch of ZZ Top’s “Gimme All Your Lovin’” about the drum pattern of “World’s Gone Crazy”, which is a pretty strident condemnation of the modern, celebrity obsessed culture.

Where Wilson is thoroughly adept, though, is juxtaposing this with some real moments of timeless music. “Peace And Love” is a classic – in every sense of the word – shuffle for example, while the title track is big, bold and glorious.

Deciding to make a solo album after the birth of his first child, this new perspective gave rise to one of the highlights here. “Words Of A Woman” based on something Wilson witnessed on the street is a superb song, one with a hint of King King about it, as their keyboard player Fridzema excels.

The array of sounds found here is impressive. “Out Of Time” is funky and fun, while “Hold On Now” transports you to a much darker musical place, as everyone shows their fine skills. “Lonely Room” almost struts at you, and by the time the gorgeous ballad of “Holding Hands” has played this out – complete with a magnificently evocative guitar line and lyrics that are clearly the burying of some personal demons for Wilson – you are left marvelling at the songwriting abilities. Akin to Springsteen, he lays his demons out and makes them universal.

Not, perhaps the conventional debut album, given the talents and experience of those on show. Nevertheless, “Broken Machine” must be judged on those terms and it is a brilliant one.

Expect to see much more of Ash Wilson. He is simply too good to go back into the shadows.