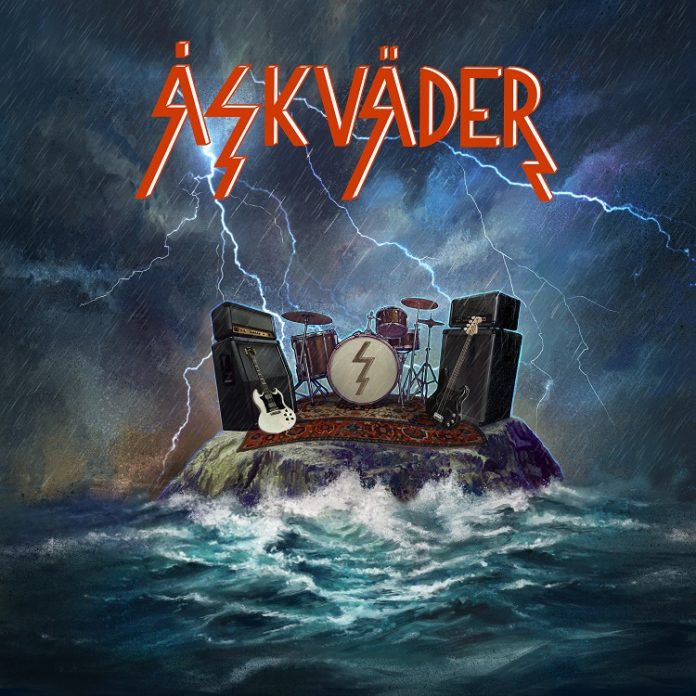 A Swedish rock n roll band. And one that is a three piece to boot.

To be honest, that’s pretty much all you need to guarantee a review on this site, given that about the only thing I love more than a three piece rock n roll band is Swedish rock n roll.

That all being said, though, Åskväder aren’t quite the norm. Staffan Persson, Jon Solheim and Martin Gut obviously know their Hellacopters from their Turbonegro’s as it were, and fans of 90s Scandi rock will find much they are familiar with here, but this is a trio that plays with the formula and blurs the lines.

Look at the sleeve art above. For one thing, it looks like a metal cover (and Åskväder – apparently – is Swedish for “thunderstorm”) but its also got the Marshall stack run aground on the rocks, as if to indicate (perhaps) that this is a rebirth and things aren’t as smooth as you’d expect.

“Thunderstorm” begins the record in the way you imagined. A maelstrom of screeching guitars, but, and here’s the key point – by the time that Solheim has started delivering the vocals, there’s more melody here than ever you thought there would be.

Sweet harmonies are all over this. “Cutting Corners” is a lovely slice of summer sounds, so much so that you don’t even notice the lyrics, necessarily.

Put it like this, if these boys want to get some action now, then they will do it on their own terms. “Gods Grace” wouldn’t be on many Backyard Babies records, that’s for sure, but there is a 60’s pop thing that even an atheist can’t resist – and handclaps, come on, you have to be made of stone not to love them, right?

“Nothing To Lose” is anchored down by some superb work from the rhythm section (and its worth mentioning here that the singer is also the drummer) and like so many on the record, it has a way of worming it’s way in to the psyche.

But, never is the fact that they are slightly apart from the obvious peers that you’d imagine for them shown better than on “Give In”. Genuine blues rock, Glucifer this is not, and neither is the more classic rock groove of “Bit My Lip” for that matter, and “Devil’s Feast” has a big old riff that is fairly sure it is still 1969.

Those three are, if you like, the “engine room” of the thing, but there’s even an indie flavour to “Elysium” before the almost surf guitar lead kicks in. The interesting thing about this record, though, is that even with all the slight off-kilter touches, this is still very much a rock n roll album – and one made by a Swedish band.

There’s an energy to it, “Defeat” for example, will have Grande Royale fans getting excited, but as if to prove their independence “The Miser” which ends the record, does so with just a little bit of metal in its veins.

This is not the most immediate records of its ilk, but it is one of the more compelling of recent vintage. “Åskväder” is a record that reveals itself a little more with repeated listens, and Åskväder – the band – are one you can only see growing as they develop.

Make no mistake, though, this is a superb first strike.