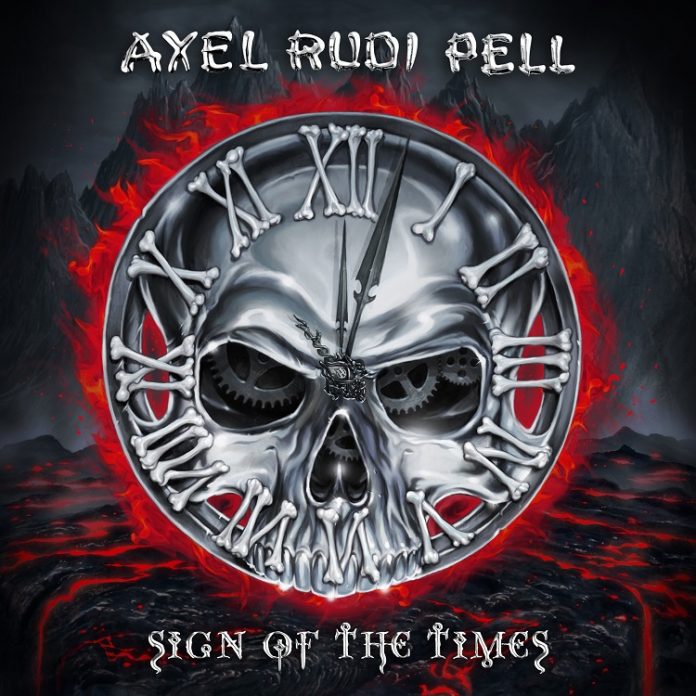 Outside of the Black Star Riders, I’d argue that there have been very few artists as consistent as Axel Rudi Pell in the last few years.

“Sign Of The Times” is the third album he’s released since 2016, not to mention last year’s brilliant live record too.

For this one, he (and I am never sure whether to refer to ARP as “he” or “they” such is the band feel that is evoked) has changed things up a touch.

For one thing he’s produced himself and out has gone his long time co-Producer Charlie Bauerfeind, and in has come Tommy Geiger, who helmed his two live releases. But that’s not all. Pell has written it all himself, and moreover, he’s moved this more into the “real world” if you like. If the last one’s were about fantasy (not like that!) then this is a state of the world address (or the world in 2019 when this was made, at least, all bets are off these days, after all).

Never is this better shown, perhaps than on a track towards the end of the record. “Living In A Dream” starts off with a reggae beat. It is unclear whether Pell shot the sheriff, or indeed the deputy, but whatever, there is a sun-kissed island spirit about it. The first verse more or less gets the Pina-Coladas in, but Johnny Gioeli (who absolutely excels on this record too, and seems to have a sixth sense for interpreting Pell’s words) soon brings it back to reality: “All the people are friendly, serving drinks all the time” he intones, cheerfully, then adds: “I am glad I have to stop now….this stupid little rhyme.”

With that a hard rock riff starts up, and before you know where you are, the verse is in a much darker place. Death, destruction, mayhem, and chaos. It’s like watching the news!

That’s these times, though, and very much that is “Sign Of The Times.”

It seems a little weird to be talking about the words on one of ARP’s records rather than his incredible guitar playing. He is one of the finest gunslingers there is, after all. And this is no exception.

“…..Times” opens (properly, there’s an intro track to start) with “Gunslinger”, which you can imagine opening the live shows. A little bit like “Aces High”, say or “Tailgunner” it starts the record in a particularly strident fashion. What is noticeable here, is that Ferdy Doernberg’s keyboards take this into a real Deep Purple type place.

The same is true of a lot of this too. “Bad Reputation” could cheerfully be Glenn Hughes era stuff it roars out, while the title track – an epic thing of over seven minutes – has a real Dio era Rainbow thing going on.

It really doesn’t matter where on the album you go, though, because it is all superb. Honestly, there have been no weak points on any of the recent output of this bunch, and there isn’t here either. Just classy hard rock, melodic metal, whatever you want to call it, its up to you.

“The End Of The Line”,  would have fitted in well on the recent – brilliant – record by The Unity, who do similar muscular melodic stuff with arena filling choruses, while the power ballad? Well, that’s alive and well, indeed positively thriving, frankly, with “As Blind As A Fool Can Be”.

Often I throw phrases out like “arena filling” and all that, but listen to “Wings Of A Storm” and tell me it doesn’t have that Saxon-esque ability to have you with your fists up in the air. It even has the first line: “I was born under a bad sign” and is surely the first non-blues song to ever do that, so kudos is due!

“Waiting For Your Call” stacks its harmonies high and its solo onto screeching, but there’s a swagger here too. And a word for the rhythm section of drummer Bobby Rondinelli and bassist Volker Krawzcak, who have pulled some fabulous stuff out throughout the record.

“Into The Fire” finishes the album in fine style as well. More “traditional” Pell, if you like, more the stuff he so casually knocks out. The sort of brilliance you almost take for granted.

It ends an album that is yet more proof that in a just world then Axel Rudi Pell – the man particularly and this band generally – would be huge. Genuine stars. As it is, despite almost two million records sold (no mean feat these days) ARP bats it all away. There’s a revealing interview with him, when he says: “When we played Moscow last summer, a lot of fans came up to me, calling me a ’legend‘. My answer was: I’m just a guitar player.” Nothing more, nothing less.”

Axel, I beg to differ, but instead, I’ll just say this: “Sign Of The Times” is yet another in an increasingly incredible canon of material from one metal’s finest right now.