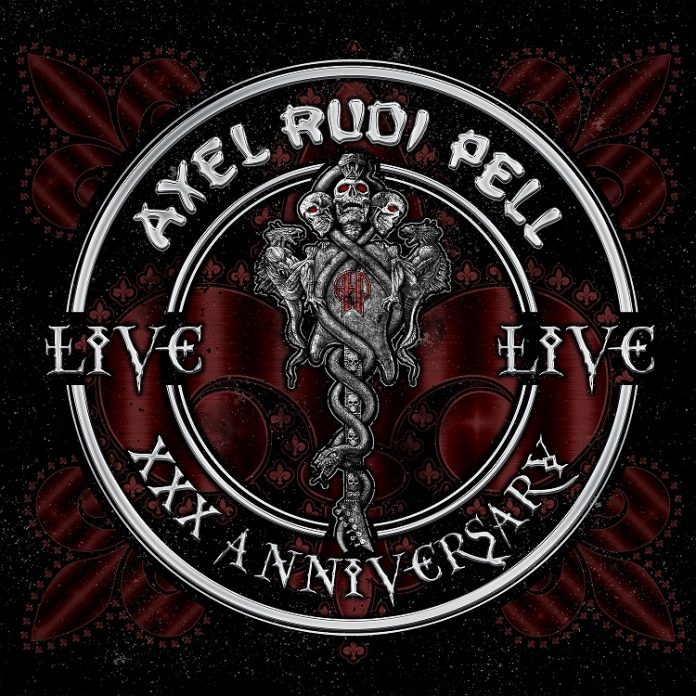 “My Front Of House Engineer, Ralf, recorded some shows on the last tour without my knowledge,” he explains. “After the tour was over he gave me a hard disc and said: enjoy”.

That is the record in a nutshell, because it is nearly every reason there is why this live album is better than nearly every other live record you will hear.

First, it sounds spontaneous. At the end of one of them singer Johnny Gioeli proclaims: “wow, what a mess!” and in “Edge Of The World” he asks if anyone is watching the band for the first time.

What follows is truly spectacular. A woman says she is popping her Pell cherry, if I can put it like that and Johnny – who has been ARP’s singer for 21 of these 30 years – says “wow! Who are you with? Is this your daughter?

After this there’s a pause before he says: “oh, its your sister…..!”

And that’s magnificent because it shows a) that ARP for all their brilliance aren’t slick, they are human, and b) clearly this is as real as it gets – because if it wasn’t, this bit wouldn’t be in.

Instead, this record, taped live at four European shows last year show that Axel Rudi Pell gives his name to a band (and in my mind it is a band, they have had nearly the same line up for 20 years, for goodness sake!) that is right up there as the finest in modern metal.

Their last few records have channelled the classics and shot them through with adrenaline better than just about anyone.

These 16 songs and just under two hours are your proof.

It begins with “The Wild And The Young” from last years incredible “A Knights Call” opus, and it ends with his anthem “Rock The Nation” – not a Montrose cover – and you know these songs, even if you don’t know these actual songs, as it were.

A touch of Deep Purple, a bit of Rainbow, add some Dio to taste, the odd Schenker flourish, and you’ve got it, but what makes Pell – and consequently this celebration – special, is that he knows this too.

As he puts it himself: ““If the whole thing hadn’t taken off, I’d be bored to tears in my trained job as an industrial management assistant to this very day.” He gets it. He’s the fan, just like you, just like me, its just that he’s incredibly talented and in many ways, he lives our dreams.

That feeling is all over this. The gleeful “Wildest Dreams”, (appropriate maybe?) the power metal tinged “Oceans Of Time” – 20 years old and still glorious – while there are two massive epics. “Mystica” and perhaps the highlight, and definitely the centrepiece, “Game Of Sins/Tower Of Babylon”.

For all the wonderful guitar, Pell is content to let Gioelli take centre stage, while the brilliant keyboards of Ferdy Doernberg propel so much of the beauty here. Right before the ending “Rock The Nation” comes another older one, but “The Masquerade Ball” basically shows everyone else how it should be done – and he cleverly segues this with a brilliant “Casbah”.

Think about this too: 30 years ago streaming didn’t exist. Axel Rudi Pell has amassed 37.5 million streams since it began.

What’s more, every single one is deserved.

To my shame I’ve never seen Axel Rudi Pell live. Here’s why I – and you – should.

People love to denigrate live records. Saying they’re stopgaps or whatever else. Not when they’re fantastic, like this, they aren’t.