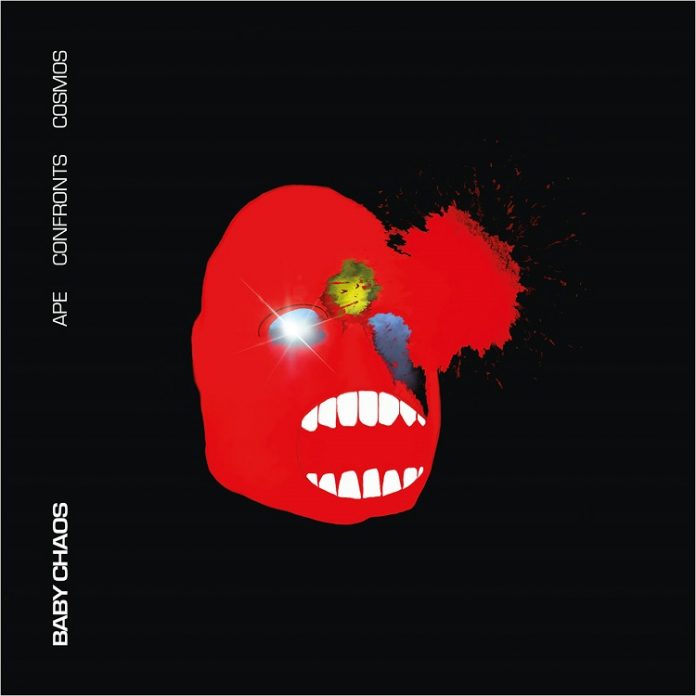 Baby Chaos, it always seemed to me, are one of those bands.

Loved by their peers – Biffy cite them as an influence, not unreasonably considering they “borrowed”, let’s say, plenty from the sound – you can’t help but feel they deserved more. “Ape Confronts Cosmos” comes five years after “Skulls, Skulls, Skulls, Show Me the Glory”.

I saw them a few times in the 90s, and I saw them again in  2015 supporting The Wildhearts (Ginger Wildheart once played guitar for the band when guitarist Grant McFarlane couldn’t make a show). That night I wrote: “ [the new sound] seems to be heavier than their previous work perhaps and less concerned with youthful hedonism than they used to be.” And those words apply to “….Cosmos” even more.

A big thing this time around is the addition of a third guitarist, Ashly Easton. This has given the songs here an even harder edge. Not like Iron Maiden, or Skynyrd, or even Black Star Riders (other bands with three guitarists are available…..) but noticeably hard hitting.

That all being said, if you liked Baby Chaos before, you’ll love this, because “Ape Confronts Cosmos” is brilliant.

And if you didn’t know them (as a lot criminally didn’t), but like angular guitar lines, interesting lyrics, and melodies and hooks that really should – still – be filling arenas, then step right in.

They have a knack (they always did) of doing what sound like epics in three and a half minutes. “Out Of This World”, the opener here does that perfectly and its like they’ve never been away.

On this collection, perhaps more than the others, it’s the nuances that get you. The Blues flourish to “The Wild Beast”, the crunch to “You Won, You Won”, and the odd delivery of Chris Gordon’s vocals, except even here, they explode into a chorus.

“Run Towards The Roar” ushers itself in on the back of a huge riff, and its here that you see the trio of six stringers at work perhaps most clearly of all, and if “I Belong In A Battle” belies its title with some gentle, lilting acoustics, then, “Mouse. Lion. Mouse” doesn’t do gentle. It does superb, very well indeed, and it isn’t stretching the point to say that if Simon Neil from that other Scottish band releases this, then they’re sticking another wing on the house (unless its all from streaming these days, but you get the point).

“Orphans On The Moon” has just a hint of The Stereophonics more rock moments about it, and “A Quiet Jubilation” pulls off the neat trick of being a proper quirky thing in 78 seconds. If that seems punk rock then “Everything I Counted On Has Been Proved Wrong” has the same kind of dynamism and energy.

The truth is, though, Baby Chaos had always and always will, fit in any box you want to put them in. They just won’t rest in it comfortably.

Back in the 90s we used to buy Kerrang, NME and a little later Uncut, all in the same week. Often the same bands would be in all three. That’s the way it should be. So it is here that “The White Witch” sounds haunting here, while it is followed up with “Your Body Is A Nervous Work Of Art”, a fuzzy, yet catchy slice of rock.

“One Thousand Sorrows, One Thousand Joys” has a real pulse, and just try to get the odd rhythms out of your head, and the ending one, “Cut Through The Ocean” has a kind of widescreen folk feel. Not in keeping, perhaps, just strangely seeming to fit wonderfully.

“Ape Confronts Cosmos” is the Baby Chaos dossier on what it is to live an examined life in the 21st century” says the press stuff that came with the record. It was, maybe. But then, the world we live in seems to get worse and more confusing on a daily, even hourly basis right now.

This album, though, stands as a document that needs to be heard in these dark times, but also any time thereafter.