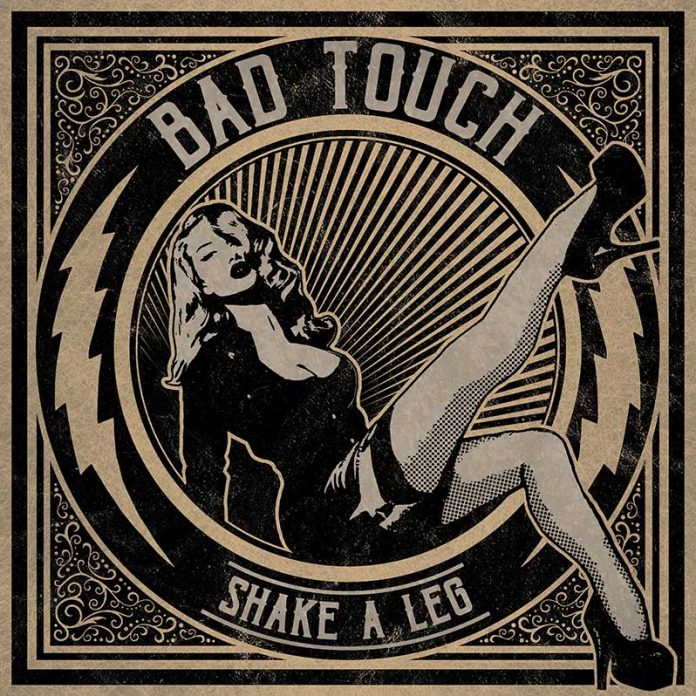 You can tell a lot by a title sometimes. “Shake A Leg”, come on? What do you think when you hear those words. Do you think about getting your glad rags on, having a good time and enjoying rock n roll for the sake of enjoying rock n roll? About forgetting that the world is dark, that you might hate your job or your football team is losing every week (feel free to add your own problems here, I plucked those out of thin air….).

If that’s what sprang to mind, then Bad Touch have just given you the perfect pick me up. Because, the best thing out of Norfolk since mustard, have delivered classics in spades this time around.

“Lift Your Head Up” – the opening cut on this – sets out the stall and sets the bar high. A glorious chorus, perfect harmonies, a hand clapping hook all happens, before Stevie Westwood sings: “what is life, if not just for fun?”

Which when you think about it, is a genuinely lovely sentiment, no?

“When The Hammer Falls”, which boasts an opening riff that to these ears at least sounded like it was going to launch into “Copperhead Road” is a touch heavier – in all senses – but it comes with a stoicism that you aren’t going to beat, and Rob Glendenning’s solo here is worth purchasing the record for alone.

I first saw Bad Touch one rainy spring night when they supported Sweden’s Bonafide a few years back, and the brilliant “Too Many Times” recalls their former touring partners brand of hard rock.  That said, if you were looking for one that encapsulated the vibe of “Shake A Leg” then I’d suggest you look no further than “Dressed To Kill”. Swagger, groove, sass even, a knowing, bluesy cool and a chorus you’ll sing by the second go around. It all happens before this line in the second verse: “I suck it up, and I get dressed up, and I forget about the week that’s gone” – and that, basically is all the ingredients you need for a working-class anthem, and I am going to guess that you wouldn’t be too far away if you reckoned it was the ever-dapper Stevie’s personal Friday night plan.

“Take Me Away” is another that is something of a departure from their signature sound, built as it is around a mighty bass platform from Michael Bailey, while “Movin’ On Up” – which is the sort of thumper that Inglorious would kill for – rather speaks for millions when it suggests: “I’m not looking for a high-class woman, I just want one that will blow my mind.”

That leaves four more and its those, really, that show why Bad Touch have built their career just like bands used to – that is to say by hard work and being talented. These more reflective ones are a different, but no less thrilling, side.  “I Belong” is a wonderfully blissful piece of southern rock worthy of Black Crowes at their peak, “Believe In Me” is the work of a band with total command of their craft and, “Slow Tempest” has echoes of Temperance Movement. However, its “Bury Me (When I’m Gone)” that really stuns. Sounding vulnerable, fragile, and yet ready for the fight, the song seems to have been recorded live, and it is the band at their absolute best.

“At their best”, though, is something you could say with every passing Bad Touch record. They just get better and better. And “Shake A Leg” is a career high, yet again.