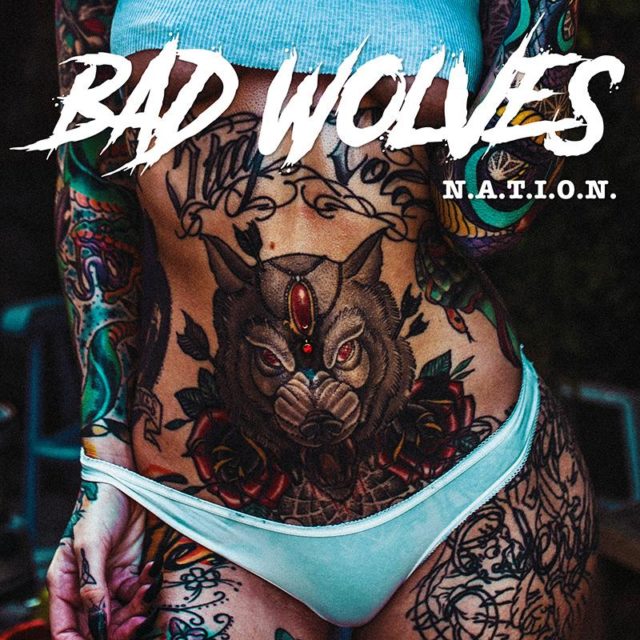 A number one single on the US Rock Charts (their cover of Cranberries “Zombie”) means a little more interest than there might have been in Bad Wolves’ second record.

Truth is they are a “Supergroup” – and god, how I hate that label – and  Tommy Vext (ex-Divine Heresy, ex-Snot, ex-Westfield Massacre), drummer John Boecklin (ex-DevilDriver), lead guitarist Doc Coyle (ex-God Forbid), rhythm guitarist Chris Cain (ex-Bury Your Dead, ex-For the Fallen Dreams) and bassist Kyle Konkiel (ex-In This Moment, ex-Scar the Martyr, Vimic) understand that whatever they put out is going to get noticed.

Now, “N.A.T.I.O.N” is a pretty quick follow up to their debut record, “Disobey” which only emerged in the spring of 2018, which rather flies in the face of the conventional modern wisdom of the album being dead and blah, blah, blah.

And yet, this is one of the more modern sounding hard rock albums of 2019. One, it must be said too, has a massive crossover potential.

Because, for all that the likes of “I’ll Be There” are thunderously heavy – and make no mistake this one is the opening statement to end them all – it isn’t the conventional “rock” thing. For one thing, Vext, delivers the vocals in a way that are almost rapped, he uses “gangsta” language too. Let’s just say there is a word beginning with “N” here that jars when you hear it.

You can tell, too, that BW are managed by Zoltan Bathory of Five Finger Death Punch, because they have the same kind of gift for melody. Also similar to FFDP, there is no grey area. When Vext sings “I am no meh” in “No Messiah” he cleverly is discussing the views on the record.

Cards on the table here in total honesty, it took me a while to get my head around this. There were a couple of that pulled me round. One was “Learn To Walk Again”. It has the same outright insistence and desire to kick the doors down as Stone Sour at their very best, another was the beguiling hard rock rhythm of “Killing Me Slowly” which is not only a superb song, it deals with obsession thus: “I’ll keep you at arm’s length and let you go, but only if you promise to stay”. Which is a mighty piece of prose to get in an arena rocker.

“Better Of This Way” adds a hitherto unseen acoustic bent to things, which is surprisingly tender. It is balanced out by the astonishingly heavy “Foe Or Friend”, which contains a particularly chilling passage, again, perhaps underlining this record’s ability to surprise, even shock.

The personal “Sober” has “radio hit” written all over it, which is just fine, but BW are better when they brood, a little threateningly, as they do on “Back In The Days”, which essentially shows other modern US arena bands how to be interesting.

The truth is that Bad Wolves aren’t really like their peers. “The Consumerist” is way heavier than the rest – owing more to Meshuggah than Alter Bridge – at least until the chorus. Everywhere you search here, though, it does something you never quite expected. “Heaven So Heartless” is electro in the manner of Motionless In White at times, “Crying Game” is a case in point, and a word here too, for Coyle and Cain. The twin guitarists might sound like a firm of Estate Agents, but goodness, they pack a punch – and one landed with a knuckle duster.

“LA Song” begins in a maelstrom. There is a chaos here, something unhinged. Maybe that’s it like living in LA, but whatever, there is a melody beneath the blunt force trauma.

And, perhaps that was why this record took so long to resonate with me. But once it does “N.A.T.I.O.N” is one of those best kind of growers. One that keeps on giving.