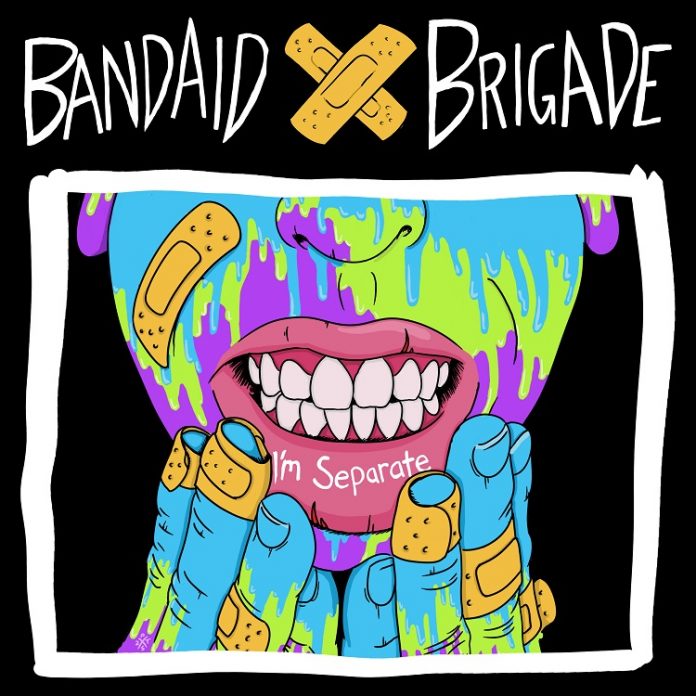 I eat a lot of fruit.

I take so much to work it’s like a greengrocers on my desk to be honest.

Last Thursday, the first day back after a week off for the festive period. I’d saved what looked like a gorgeous orange until last. You do, after all, have to have something to look forward to, right?

I began to peel it, and within a second or two, it had become obvious that the thing was rotten in the middle, and moreover there was something rather unpleasant crawling in it too.

As a metaphor for “I’m Separate” I can’t find a better one.

Because, what Bandaid Brigade do is utterly glorious. Kinda classic rock – if you consider the Elton John “Goodbye Yellow Brick Road” album to be classic rock – but just as likely to get funky (witness the genuine disco of “Travel Light” for proof), but then strip away the layers and there’s something incredibly bleak at its core.

The brilliant, slow building “Everything” – not too far from something ELO might do – is asking for “needles for our junkie friends” by the end of the first verse, and in “Atilla” the harmonies which Zach Quinn adds to (his voice sounding not too far from Eliott Smith at times) are opining that “I’ll make a list of people who, I’ve been a shitbag to”, and so lovely does it sound, that you don’t really notice.

Quinn is in Pears and the rest of BB are in various punk and hardcore bands. Brian Wahlstrom (Scorpios, Gods of Mount Olympus) and friends Paul Rucker (Armchair Martian, Street Dogs, Drag The River) and Chris Fogal (The Gamits), but you can forget that. This is nothing like punk. In fact, its not like anything else. At all.

“Stay Busy” veers from Americana, to 60s swirling harmonies to pure 80s soul. The sax of Joe Cardillo is something that Clarence Clemons himself would be proud of. Granted, I never miss a chance to mention the Hold Steady on these things, but there is a moment on “Treat Me Like A Christmas Tree”, where the solo rips out and it doesn’t half remind of Craig and the boys, “Most People Are DJ’s” in the way it comes out of nowhere.

Everywhere you look there is something brilliant. “Losing Light” is resolutely in the thrall of Elvis Costello, while the haunting keys of Brian Wahlstrom turn the odd “I Think It’s Going To Rain Today” into something of a centrepiece. His piano is integral to the whole album, but “Holding Steady” is an excellent example of his skill.

“Break The Grid” – which again lives on its keyboard riff – takes a turn that even for this album you weren’t expecting – it couldn’t be more AOR if it was recorded by Journey and was played in an episode of Dallas, “Nothing Matters” is fragile and understated by comparison, while “Nothing” the closer, is actually the prelude to a Credence Clearwater Revival style hidden track, possibly called “Butt Train” which is ludicrous, potty mouthed and downright marvellous.

“I’m Separate”as a whole is only one of those things. And you can guess which. It might be quirky, but god it’s a gem, and you can enjoy it on so many levels. It’s classic rock. Because its classic, and it rocks. But it is so much more.