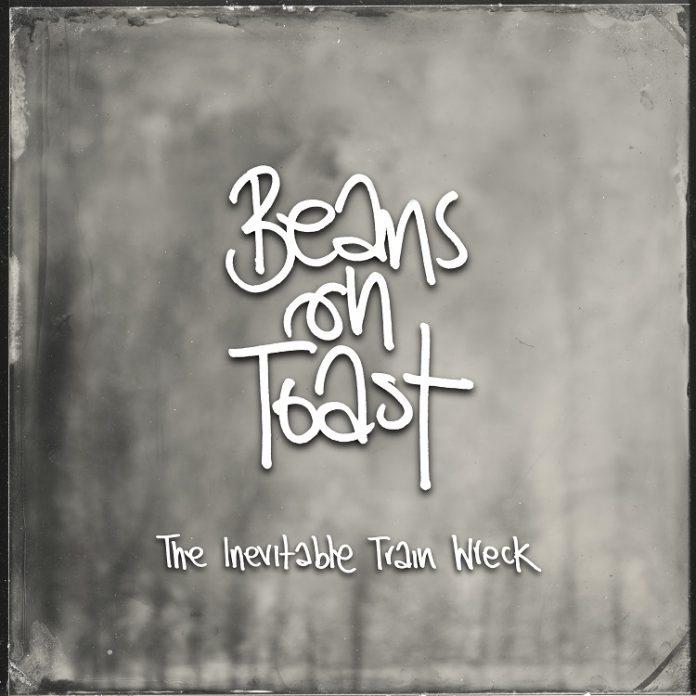 I don’t often get political in reviews – frankly no one really cares what I think or don’t think. I’ve done it occasionally and I am going to do it here. “The Inevitable Train Wreck” almost insists that I do. I don’t care if you agree with me, either.

Consider that a disclaimer.

As I type this, we are six days away from an election in this country.

The political discourse right now is toxic. I am taking no moral high ground here, I have had a row with one of my oldest friends on Twitter because he said he was going to vote Tory, even though he considered Boris Johnson to be a racist.

Brexit, hangs over the whole thing like a horrible smell. If you believe what I believe, then Brexit doesn’t actually matter, it is a smokescreen to allow the evil Government that we currently have (I believe they are “evil” too, that is not a typo, or a glib phrase) to get away with destroying the poor under the guise of “taking back control.”

And there’s two verses on the second song here, “England, I Love You” that convinced me to write this review in the way I have.

“And now our little island comes crashing out the union

We’re going it alone as The Divided Kingdom

A small fish in a big pond with delusions of grandeur

A worrying sense of self-worth and nostalgia for an empire

Built on blood and bones, not on cups of tea

But it’s easy to believe what you wanna believe.”

And just as you’re ready to scream “Fuck you Farage, you racist wanker,” this comes.

“Now hate is on the high street, it’s marching into town

There’s a whole lot of finger-pointing going down

But always at each other and never up above

I think we’ve been divided and conquered Mum”

And that’s before the pay off line. “While all of this was going on, nobody even noticed.That today was the hottest day in London on record.”

So two things. First, fuck the mainstream media, fuck Phillip Schofield and the BBC. Second, Beans On Toast is right. He’s nailed it. None of this matters in the great scheme of things.

Listening through that prism, the opener “World’s Gone Crazy” can be seen as a state of the union address, set to classic rock n roll. Usually, I’d write something shit here, like “you can just enjoy this as a piece of catchy music”, but really, what’s being said is too important – and lets not kid ourselves, rather like Billy Bragg BoT is basically reaching to the converted here.

But crikey, he doesn’t half do it well!

The bass line on “Extinction No. 6” an ode to Extinction Rebellion and an essay on climate change, suckers you in, but it’s utterly fabulous, “Saying Thank You To Robots” is a bluesy lament on AI, and say what you like about Jay McAllister, but the fella is one of the finest wordsmiths we posses.

And I say that, because for all the folky harmonica that frames “Rich Vs Poor”, it offers a new perspective on class war that you hadn’t thought of. All summed up in one line: “it’ll be the loaf of bread vs the upper crust”.

Bob Dylan, mate, he got a Nobel Prize for less.

“Logic Bomb” borrows from “Express Yourself” to get all funky about the dangers that computer hacking pose to the world” before “Mountains” strips down, more gentle than most here, there are Americana bands the world over that would kill for this.

But if ever you needed proof that what we are dealing with here is something original, then these two. “Lost Poetry Department” mixes train issues with losing his lyric book absolutely skilfully, and yes there’s a hint of Frank Turner here, but the one that follows, “Take Your Shit Home With You”, imagines the clean up after a festival, and my notes for this track, simply said: “who could make a song about this?”

A genius, that’s who.

“Truth Be Told” has a bit of latter day Billy Bragg about it, encouraging more empathy than I displayed online with my mate the other day, and the piano? Chas and Dave, that’s all I am saying.

And the last one. I’d argue that “On And On” is the most important here. Because it recognises that despite capitalism encourages “profit over people, profit over everything” it isn’t all bad, despite the fact that: “more people take their own lives now, than die in war” , but crucially whatever they do to us after December 12th, life goes on, and that we can save the world. “I’ll help a 16 year old girl, destroy the oil industry,” he sings here.

“The Inevitable Train Wreck” is Beans on Toast’s 11th record. It’s his best – although maybe that’s because it is exactly the one I needed someone to make, right now? Whatever. I saw Billy Bragg this week, and he said that “he worked for Woody Guthrie” the  same spirit of the folk singer documenting his world and suggesting how we can change it, is all over this.

This land is our land. Not yours, not mine, and not theirs. For goodness sake make this the soundtrack for 2019.